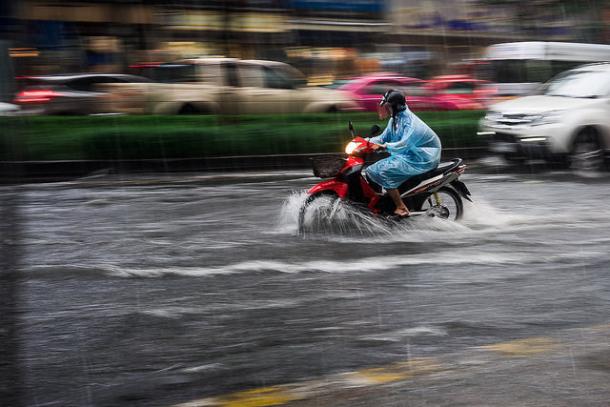 The project for Community-based Approaches to Flood Management in Thailand and Lao People’s Democratic Republic developed self-help capabilities in flood-prone communities in the two countries. The Associated Programme on Flood Management, a joint WMO/Global Water Partnership initiative, worked alongside the Asian Disaster Preparedness Centre and a range of country partners for the three years of the project – from June 2013 to March 2016. With funding from USAID through WMO, the Programme implemented flood risk assessments and preparedness measures using a participatory approach in four pilot communities prone to riverine and flash floods in Thailand and Lao People’s Democratic Republic.

Its community-centred approach aimed to reduce the negative impacts of floods while enhancing community preparedness and resilience to flood events. The Sendai Framework for Disaster Risk Reduction (2015–2030), adapted two years after the project launched, would underline the significant role of communities in disaster risk management activities. Thus, the project complements the community-based disaster risk managment in the Sendai Framework, specially linking with prorities of action 1, 3 and 4.

Significance of the project

Flood risk has been a growing concern in the communities of Thailand and Lao People’s Democratic Republic. With every flood situation, community capabilities have been reduced and investments in development – such as houses, hard assets, livestock, food or security – severely affected within a short time period. But communities were not actively engaged in flood risk management activities, they were simply seen as its beneficiaries.

The first step in the pilot project was to familiarize them with flood/disaster management concepts. Then they were engaged in participatory risk assessments and preparedness measures for flooding. This would help them to undertake such activities independently in the future and also help neighbouring flood-prone communities to develop capacities in similar ways. The idea was to foster community project ownership so that long-term sustainability would be developed beyond the project duration. The project also brought the communities and local agencies together to work in a coordinated way to develop resilience to floods.

Main benefits of the project

Participatory risk assessments – This proved to be an invaluable means of helping pilot communities and local authorities to develop an understanding of specific local risk factors to various hazards. As a participatory process, groups were engaged across each community to share their thoughts, reflect upon their needs and identify and design potential solutions which could minimize flood risk and increase preparedness and resilience. The process encompassed hazard, vulnerability and capacity assessments. People’s perceptions of risk within a community were also considered. Risk assessment results were compiled and presented as community risk profiles and hazard maps, which were further used by the community to identify flood risk reduction solutions.

Formation of a Community-Based Flood Management Committee and a Village Disaster Prevention and Control Committee – These committees played an important role in empowering community members through participation in planning efforts for disaster preparedness. Based on their skills, experience and areas of interest, committee members were trained and assigned to work under dedicated subteams – for early warning, search and rescue, evacuation, security, health and relief. This helped in assigning roles and responsibilities to committee members and guided them in performing tasks before, during and after flood events.

Shift from a reactive to a proactive approach – The historical way of dealing with flood disasters in the region has been to respond after the event has occurred, rather than being proactive ahead of flood events. It was important to change the mindset and the traditional way of working with external responders. The proactive approach of the community was visible during simulation exercises performed during the monsoon season of 2015, in which pilot-project communities proactively responded to flood events.

Impacts of the project

In theory, a community that comes up with its own ideas and work programmes to address its individual needs has a better chance of finding long-term solutions. With knowledge of the local geology, hazard context and resources available, local communities were involved in flood management programmes from the start. The support received was to develop the capacities and linkages that help overcome susceptibility to disasters. In this way, individual community members benefited from the project activities. The impact stories gathered below highlight some of these benefits.

The Associated Programme on Flood Management and the Asian Disaster Preparedness Centre recently conducted a post-project assessment in Thailand and Lao People’s Democratic Republic. The objective was to determine the outcomes and long-term impacts of the project 15 months after of its completion. This included the relevance and fulfilment of objectives, the efficiency and effectiveness of managing flood risks, the impacts and the sustainability of the project. The assessment methodology used a participatory approach, fully engaging the primary beneficiaries (community members) and supporting entities (local/regional/national agencies involved in the project) with significant roles in the project activities as the core constituents.

During the assessment visit to the pilot communities, it was observed that they have improved awareness and capacities for better response in emergency situations, particularly in community-based flood preparedness and early warning infrastructures/services. However, the sustainability of the project remains a challenge, as communities are not regularly practising the training and skills provided through the project. Mock drills or simulation exercises were not carried out after 2016, nor were pilot communities approached by local agencies to support simulation exercises. There has been a lack of participation and engagement from local agencies with the project communities, as a budget has not been allocated for performing post-project monitoring and evaluation of flood preparedness activities. The methodologies and expertise to perform periodic monitoring and assessment of project activities are not available, neither in Thailand nor in Lao People’s Democratic Republic.

“The project has installed 12 close caption televisions (CCTVs) throughout the community which help our security committee to monitor safety. We also installed three spotlights in poorly lit areas to improve people’s feeling of security. There are still some areas which CCTVs could not cover. We will mobilize funds from the community members or other sources to install more CCTVs in those areas to further improve community security.”

Next steps towards long-term sustainability

The pilot communities should utilize their structural and non-structural assets for building sustainable resilience. Communities should be supported with regular training practice sessions and toolkits, which will help keep them updated with flood preparedness knowledge and skills. A promotional calendar containing success stories and timelines for conducting simulation and training exercises should be developed and shared with the communities, emphasizing the importance of these activities and reminding communities about the need to have periodic simulation drills.

Communities also need additional investment to mainstream disaster risk reduction into development practices, plans and policies at local, provincial and national levels and to further gain economic benefits out of the investment. Flood prevention measures need to be actively pursued so as to further reduce the impacts from future flood events. These include planned construction of dams or reservoirs, land-use planning, avoiding construction of houses near rivers through flood zoning, flood proofing and providing flood awareness through school education. Other communities prone to flooding should perceive the pilot communities as a role model for attaining flood resilience, so that they can develop their capabilities in similar ways.