Disaster-related displacement in a changing climate 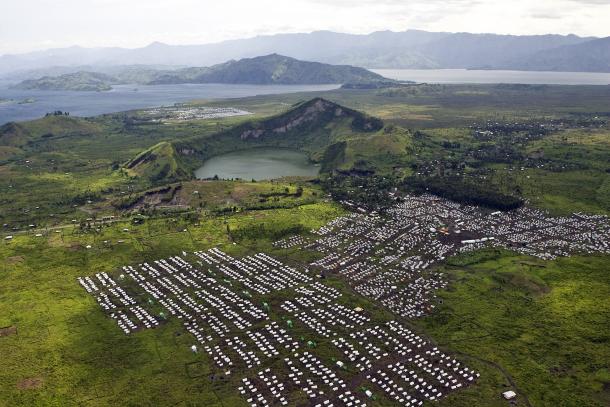 Disaster-related displacement in a changing climate

Climate-related displacement is already a global reality. Every year, the lives of millions of people are affected when they are displaced by the impacts of weather and climate hazards. Some of the largest disasters make the international headlines, but most disasters do not even make the national news. Yet, for poor and vulnerable families struggling to survive, even a small weather-related event can make an enormous impact on their lives. The Internal Displacement Monitoring Centre (IDMC) has estimated that between 2008 and 2014, an annual average of at least 22.5 million people were displaced by the direct threat or impacts of floods, landslides, storms, wildfires and extreme temperatures on their safety, homes and livelihoods1.

The figures (see graph below) vary significantly from year to year, ranging from 13.9 million displaced in 2011 up to 38.3 million displaced in 2010. This variance is strongly influenced by mega-scale disasters that occur relatively infrequently and unpredictably but which can displace millions of people at a time. In 2014, for example, the 10 largest events, all of which were related to either storms or floods in Asia, each displaced around 500 000 to 3 million people in the Philippines, India, Pakistan, China, Japan and Bangladesh2.

Between 2008 and 2014, an annual average of at least 22.5 million people were displaced by the direct threat or impact of floods, landslides, storms, wildfires and extreme temperatures.

Knowledge gaps: Displacement in the context of gradual change

The scope of these estimates is substantial yet limited in providing an overall picture of displacement related to weather hazards and other climate impacts. For instance, it does not capture displacement that comes about indirectly through the gradual erosion or destruction of livelihoods, increasing food insecurity and other basic means for survival in the context of climate-related processes such as drought and sea-level rise. The lack of systematic monitoring of displacement in these contexts is an important drawback in the knowledge currently available to decision-makers formulating policy and plans.

The core of displacement risk: Exposure and vulnerability

The contribution of weather events and gradual climatic changes to displacement risk is dependent on patterns of population exposure and vulnerability, which neither climate change nor weather events alone are responsible for driving. As pointed out by the International Panel on Climate Change (IPCC) Fifth Assessment Report (AR5), differences in the levels of exposure and vulnerability between people and countries are linked to “non-climatic factors” and “multidimensional inequalities often produced by uneven development processes”. Policy and actions that aim to decrease exposure and vulnerability through sustainable development, disaster risk reduction and climate change adaptation, therefore, play an important role in averting or minimizing displacement risk.

Significantly more people are living in hazard-prone areas such as coastal and river oodplains than ever before, due to their proximity to livelihood opportunities or the lack of land in safer areas. The global population has grown by 96% since 1970 and average urban populations have grown twice as fast. Taken on their own, urban populations in developing countries have grown 326%. Mainly because this growth is often unplanned and poorly managed, vulnerability is also increasing.

These broad trends are reflected in the global distribution of disaster displacement in recent years, with developing countries accounting for over 90% of weather hazard-related displacement recorded since 2008. While all regions of the world have been affected, east and south Asia and the Pacific have seen the highest levels of displacement by far, while displacement levels in Latin America and the Caribbean have also been comparatively high relative to population (see graph below).

Developing countries account for over 90% of weather hazard-related displacement recorded since 2008.

Many areas and populations are hit by multiple hazard events and repeated displacements, even within the short timespan of a year. Such patterns can be seen in disasters in China, for example, where flooding and storms as well as earthquakes triggered repeated large-scale displacements in the southern provinces of the country (see map on page 20).

Repeated cycles of displacement and return can eventually culminate in vulnerable people seeking longer-term safety and more secure livelihoods elsewhere. In Bangladesh, for example, poor rural families living in the ood and cyclone-prone Ganges delta region suffer frequent disaster and displacement by floods and cyclones, which erodes their capacity to recover between one disaster and the next. Six months after Cyclone Aila displaced over 842 000 people in 2009, some 200 000 were still living in makeshift shelters on roads and embankments, “surrounded by unruly water at high tide and at low tide by thousands of hectares of desolate muddy land4.” Six years later, many remain in highly vulnerable conditions or have moved out of the area.

Significant displacements are also triggered by extreme weather in high-in-come countries where specific vulnerabilities or pre-existing forms of inequality and discrimination make displacement a particular concern for some people. This becomes more pronounced in prolonged or protracted cases of displacement. In the United States of America (USA), for example, a disproportionate number of people of colour from low-income backgrounds remain among those still displaced from their homes following “Superstorm” Sandy in 20095. In Canada, the displacement of indigenous “First Nation” communities from their homes and way of life on reservation land following the 2011 Manitoba floods continues to go unresolved6.

While it is commonly assumed that displacement following sudden-onset disasters is short term and temporary, these examples are among many others that show that displacement among highly exposed and vulnerable populations may become chronic or prolonged for years before sustainable solutions are found7.

In combination with socio-economic drivers of exposure and vulnerability, patterns of increasingly frequent and severe weather clearly influence displacement risk. While quantitative projections are highly uncertain because of displacement’s “complex and multi-causal nature,” the IPCC has reported wide agreement that climate change will increase the displacement of people in response to both longer-term climate variability and the increasing intensity and frequency of extreme weather events over the course of the twenty-first century. It has also noted that tens of millions of people could become permanently displaced from home areas made uninhabitable by sea level rise.

Naturally occurring cycles of El Niño and La Niña climatic periods, such as we have been experiencing during 2015/2016, also increase the severity and frequency of extreme weather events. While there is no consensus on how iterations of El Niño and La Niña will change as the global climate warms, studies suggest they are becoming more intense8.

The strongest El Niño on record in 1997/1998 is associated with some of the worst flood and storm-related disasters of the last couple of decades. During the 1997/1998 El Niño, severe oods in Asia, an abnormally active tropical storm season in the Atlantic basin, hurricanes in Central America and the Caribbean and other events all contributed to major disaster displacements with serious and long-lasting impacts on vulnerable populations. Some 14 million people were displaced during summer floods across wide areas of China, including the South-central Yangtze river basin, and a further 8 million displaced across 12 northern states of India by flooding between June and August. Hurricane Mitch created havoc across several countries in Central America and the Caribbean.

The IPCC has reported wide agreement that climate change will increase the displacement of people in response to both longer-term climate variability and the increasing intensity and frequency of extreme weather events over the course of the twenty-first century.

In Honduras, where half of the population was already living in extreme poverty, Hurricane Mitch displaced 2.1 million people and worsened poverty levels and food insecurity for some, including those who remained displaced9. While some returned to rebuild their former homes they often did so without adequate materials to make them resilient against further shocks. For others, the extent of the devastation meant return was not possible, including 25 communities that had to permanently relocate elsewhere. Some people were still displaced up to ten years later.

Under changing climatic conditions, even normal seasonal coping strategies or preparedness measures can prove inadequate to managing the impacts of abnormal weather, especially for the most vulnerable people and households. Provisions made for emergency evacuations, for example, may underestimate the areas affected and the needs of the displaced. As evacuations usually assume that people will be able to return within a short period of time to their homes, families and government authorities may also underestimate how long they are likely to be displaced for. The needs of displaced people for protection, relief and recovery assistance evolve over time while they are unable to return to their former homes or settle in new ones. People with limited mobility, those dependent on carers or access to medical care and others, such as older people, people with disabilities, women who are pregnant or with young infants and children, have specific needs and require particular attention.

Sea level rise is expected to become a significant driver of future displacement, particularly in small island states and low-lying coastal areas as natural resources and livelihoods dependent on them become increasingly degraded and unviable. Sea level rise will aggravate the effects of swell waves, storm surges and other drivers of severe seafood and erosion risk. Wave over-wash is also con dently predicted to degrade fresh groundwater resources. Likewise, other gradual changes such as the warming of sea surface temperatures, ocean acidification, the depletion of oceanic oxygen and coral bleaching have the potential to impact on the sustainability of livelihoods, including sheries and tourism. Agricultural livelihoods can also be affected by the salination of groundwater and soil associated with sea level rise and climate variability in terms of drought and floods.

Where displacement is unavoidable, measures to minimize crisis conditions and ensure that people are able to migrate with dignity will be increasingly needed. This requires context-specific strategies that are socially and culturally acceptable and pay particular attention to including those people who risk being literally or figuratively left behind, such as older persons, people with disabilities and indigenous communities. Ultimately, the future scale of displacement and the severity of its impacts will depend on the extent to which vulnerable communities and countries are able to invest in strengthening their resilience and ability to adapt to risk in this changing landscape. While uncertainty about climate change and environmental impacts continues to demand more research, the frequent and global scale of displacement already happening amplifies the urgency for action.

Where displacement is unavoidable, measures to minimize crisis conditions and ensure that people are able to migrate with dignity will be increasingly needed.