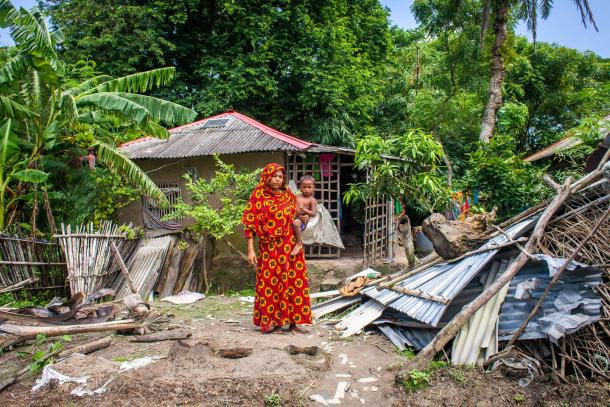 The impacts of severe hydrometeorological events are not gender neutral. Gender, along with class, race, age and other intersecting social identities, contributes to shaping the roles, power and resources available to women, men and non-binary in any culture, including the resources necessary for resilience. Women, for example, are often directly responsible for the care of children, sick or older family members and are thus less likely to be able or willing to evacuate alone1 or may delay evacuation to rescue family members or valuables.2

Furthermore, women are often placed at greater risk through a lack of timely and relevant information about imminent hazards. Women often do not have equal access to technology, communication and services, and thus miss out on critical information. This is particularly true for women and other marginalized groups in rural or isolated areas. The channels through which women and men get information from also differs. A study in Nepal determined that 71% of men received early warning information through a formal source, such as government or nongovernmental organizations (NGOs), whereas 51% of women received their information through informal social sources such as word of mouth from community or family members.3

A UN Women-UNICEF study focusing on the missing voices of women in disaster risk reduction (DRR) efforts confirmed that gender norms and barriers to their participation affect women’s vulnerability to disasters. Women’s higher illiteracy rates, lower mobility rates and limited access to communications technology, including radios and mobile phones through which early warnings tend to be communicated, all increase their vulnerability. Men also tend to be considered household decision-makers, which can put women at risk. In some cases, women remain at home because their husbands have decided not to evacuate or to wait for their husband to return before leaving. Due to gender-specific roles and expectations, women are more likely to be at home when disaster risks arise and to take on the responsibility for evacuating their family to safety.4

Moreover, the needs of women are inadequately met and their gender-specific contributions and solutions remain unleveraged because their voices are often absent in the design and decision-making processes for multi hazard early warning systems (MHEWS). When women in all their diversity are actively engaged in the development and implementation of disaster management laws, policies, operational plans and procedures and MHEWS identify and address the diverse needs of different groups, DRR efforts become more inclusive and accessible and, ultimately, more successful. Despite growing recognition by international institutions and development practitioners that a gender lens is crucial to understand and promote resilience to climate and security risks, it has yet to be meaningfully applied to research and in practice in climate resilience and DRR efforts (Ide et al., 2021).5 This article explores what WMO, the United Nation Office for Disaster Risk Reduction (UNDRR) and UN Women are learning with regard to gender evaluations in DRR and early warning systems (EWS), and how UN partners are working together to better support Members.

“Well-designed disaster risk reduction and climate change initiatives that provide for the full and effective participation of women can advance substantive gender equality and the empowerment of women, while ensuring that sustainable development, disaster risk reduction and climate change objectives are achieved.” – Committee on the Elimination of Discrimination against Women Recommendation 37.

What we are learning

In 2017, the Caribbean experienced its most costly hurricane season with 17 named storms, 6 of them major hurricanes. Most of the damages were inflicted by Hurricanes Harvey, Irma and Maria. An evidence-based assessment of the early warning system was carried out by WMO, which included gender considerations.

The following outlines the major findings of the assessment:

In 2021, UNDRR, in partnership with Shifting the Power Coalition and ActionAid Australia, undertook a study on the women-led EWS in the Pacific. The Fiji Women’s Weather Watch, Vanuatu’s Women Wetem Weta, Papua New Guinea’s Meri Got Infomesen and Fiji’s Disabled People’s Federation Emergency Operations Centre were the focus of the study. Using existing community networks and a range of different technologies, these initiatives have successfully demonstrated how to communicate real-time information to help diverse groups of women and their communities better prepare for and take early action before disasters strike, ultimately saving lives and livelihoods.

These initiatives use different approaches to empower women and marginalized groups across the Pacific region through early warning information-communication systems. They demonstrate how women’s innovation and use of appropriate and accessible information and communication technology and systems support effective early warning messages in real-time and in local languages, contributing not just to building the resilience of their communities but to supporting women’s agency, leadership, and gender equality.

The study found that these women-led initiatives provide valuable insights for strengthening people-centred, inclusive, accessible, effective and sustainable MHEWS. They are of particular importance in several areas:

The 2015 Conference on the Gender Dimensions of Weather and Climate Services6 served as a milestone of renewed WMO engagement with partner agencies on gender equity efforts. Following the conference, WMO updated its policy on gender equality and developed an action plan to mainstream gender in its governance, working structures, programmes and throughout service delivery. The 2019 WMO publication Gendered Impacts of Weather and Climate: Evidence from Asia, Pacific and Africa presents 18 gender case studies by WMO Members. The case studies provide practical recommendations to NMHSs for bridging information asymmetries and developing gender-responsive services in terms of content, dissemination channels and feedback mechanisms, with the overall goal of enhancing adaptive capacity and reducing negative impacts of weather and climate.

The first session7 of the WMO Commission for Weather, Climate, Water and Related Environmental Services and Applications (Services Commission or SERCOM) in 2021 established a Focal Point on Gender Equality to facilitate and monitor the successful implementation of the WMO Gender Action Plan within SERCOM. The Focal Point was tasked with creating, maintaining and expanding a network of gender focal points and female experts involved in the work of SERCOM. Through their engagement with Gender Focal Point networks in other WMO bodies and UN organizations and the consideration of relevant studies,8 they will promote a better understanding of gender-specific user needs and consequent delivery of gender-responsive weather, hydrological, climate and environmental services.

The Third Multi-Hazard Early Warning Conference (MHEWC-III)9 – From Stock take to Scale on Target G: Accelerating the knowledge and practice of MHEWS for risk informed resilience – on 23 and 24 May aims to propose recommendations to further mainstream gender considerations into WMO MHEWS activities. A gender segment at the Conference will also share good practice. WMO plans to integrate the MHEWC-III outcome statement, including the recommendations on gender, into its interventions and engagement at the Global Platform for Disaster Risk Reduction on 22, 23 and 28 May.

WMO recognizes that diversity and gender equality are crucial for better governance, improved performance and higher levels of organizational creativity. Gender equality and the empowerment of women are of paramount importance for scientific excellence and essential to meeting the challenges of climate change, DRR and sustainable development, particularly Sustainable Development Goal 5: Gender equality. WMO is pleased to be an active contributor to the United Nations Plan of Action on Gender and is resolved in its efforts to work with Members and partners to achieve gender equality, empower women as leaders in disaster risk reduction and climate action and build climate resilient societies.

The WMO, UNDRR and UN-SPIDER, together with other partners, are currently developing the Words Into Action (WiA) guide on MHEWS, which will be reviewed at MHEWC-III. This document will guide governments, stakeholders and partners on how to institutionalize, operate, monitor, and strengthen people-centred inclusive approaches for MHEWS that enable early action.