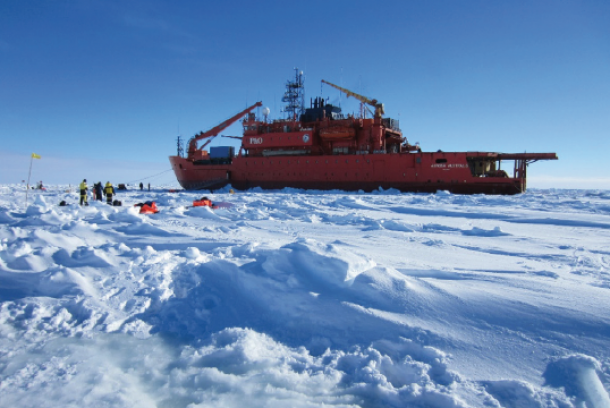 Sea ice is a key indicator of climate change. While changes in sea ice affect the access to polar oceans and surrounding seas and their resources, and are an important factor for ensuring the safety of navigation in the high latitudes. Furthermore, changing sea-ice cover impacts ocean circulation and weather patterns, locally and in the mid and low latitudes.

The WMO Global Cryosphere Watch (GCW) provides a focused approach to addressing the needs of Members and their partners for observing the cryosphere as a key component of the Earth system. Through the GCW, cryospheric data can be accessed and used to meet information needs. Value-added analyses and indicators can build on the in situ, space-based and airborne observations and models of the cryosphere, available in the GCW, to develop products and services.

Sea ice is a high priority activity of GCW, with a particular focus on fostering consistency of sea-ice observations across polar regions and on sustaining access to well understood sea-ice data and satellite products – critical inputs to numerical weather predictions, climate monitoring and operational services. These GCW sea-ice activities are coordinated with the other ocean relevant activities of the WMO Technical Commissions. In 2020, GCW became one of the joint stewards of the Ocean Observations Panel for Physics and Climate (OOPC)1, monitoring the Essential Ocean Variable (EOV) and Essential Climate Variable (ECV) for sea ice.

Observing sea ice is not trivial due to scale, remote access, extreme operating conditions, high associated costs. Data acquisitions and subsequent assessments are often fragmented between research, academic and operational entities. Furthermore, various issues related to sea-ice observations, data standardization and use are not fully resolved. However, demand for near real-time and increased spatial resolution information on sea-ice concentration, thickness, pressure, stage of development, presence of icebergs and other parameters is increasing, driven by forecasting and decisions for navigation, search and rescue, and climate and ecosystem services in polar regions.

GCW works in close collaboration with the WMO Polar Space Task Group on the third priority. All three align with activities planned within the framework of the UN Decade of Ocean Science for Sustainable Development.

Standardized observing and reporting protocols are necessary to overcome the scarcity and fragmentation of sea-ice data for both, the Arctic and the Antarctic, and to provide normed and well characterized input for the development and validation of numerical models and remote sensing data products. This is possible through collaboration with other programmes, which GCW facilitates. These include programmes under the Global Ocean Observing System (GOOS), those operated by Sea Ice Services, and long-standing research programmes such as Antarctic Sea Ice Processes & Climate (ASPeCt), IceWatch, Antarctic Fast Ice Network (AFIN), the International Arctic Buoys Programme (IABP) and International Programme for Antarctic Buoys (IPAB). ASPeCt is the expert group on multi-disciplinary Antarctic sea-ice zone research within the Scientific Committee for Antarctic Research (SCAR) Physical Sciences program, coordinating ship-based data collection in the Southern Ocean, data calibration and building an observational record. Building on the research Data Network Arctic Shipborne Sea Ice Standardization Tool (ASSIST) developed under the Climate and Cryosphere Project (CliC) of the World Climate Research Programme (WCRP), IceWatch has been adopted by the Norwegian Meteorological Institute, to collate and archive sea-ice observations from the Northern Hemisphere. Finally, AFIN is the Antarctic Fast Ice Network concerned with the acquisition of near-coastal ocean-sea ice-atmosphere observations.

The consolidation of sea-ice observing requirements is a GCW priority in the context of balancing the needs for weather and climate monitoring with the demand for near real-time (< 24 hours) higher spatial resolution (hundreds of metres) data. The consolidated requirements would need to reflect the needs of applications for sea-ice operational monitoring activities, for search-and-rescue and for understanding and addressing the dramatic effects of climate change on polar ecosystems, which also relates to food security, including for indigenous populations.

In parallel, well-documented observing requirements support the evolution of observing systems for polar regions, where there is a significant reliance on satellite observations. Satellite mission objectives and their implementation rely on input from user communities to prioritize investments, for instance, when satellites near their expected end-of-life and must be replaced. One example is the Call for Support, signed by over 600 scientists from more than 30 countries, to fill the anticipated gap in the polar radar-altimetry capabilities. This and other potential gaps, if materialized in practice, would introduce decisive breaks in the long-term records of sea-ice (and ice-sheet) thickness change at an extremely critical time when the continuity of climate monitoring is essential for monitoring progress under the Paris Agreement of the United Nations Framework Convention on Climate Change. This underlines the importance of WMO’s role in supporting the identification of user needs and critical gaps to inform decisions on satellite mission priorities, from forecasting weather and ocean conditions and monitoring ocean, ice and waves conditions for safety of navigation in the polar regions to the continuity of climate records.

Consistency of observing products available from diverse space missions, and their alignment with user needs, are critical. In this regard and in consultation with the international community, GCW has initiated an intercomparison of satellite products on sea-ice thickness and snow depth on sea ice. Ice thickness provides an integrated measure of changes in the energy budget, while snow on sea ice adds a key insulating layer. The latter, where sufficiently thick such as in the Antarctic, may contribute to sea-ice volume through snow-ice formation.. These parameters are critical for forecasting and navigation in polar waters as sea-ice thickness limits the use of vessels of certain ice classes, and the gluing effect of snow cover reduces icebreaking effectiveness. While a wide array of retrieval methods is available for estimating sea-ice thickness from a range of satellite observations, estimating the snow thickness on sea ice remains a challenge (IPCC, SROCC, 2019). The intercomparison is expected to provide recommendations on future space missions for addressing acknowledged gaps. GCW will provide the scientific steering of the project.

The 2019 IPCC Special Report on the Ocean and Cryosphere in a Changing Climate documented the need for a coordinated and holistic approach to observing and investigating changes in sea ice. It noted the remaining “critical gaps in knowledge concerning interactions between the atmosphere and specific elements of the polar ocean and cryosphere.” Then went on to state that these gaps “… limit the understanding of ongoing and future trajectories of the polar regions and their climate systems”. GCW is well positioned to encourage and effectively coordinate projects to fill these gaps and to foster consequent data analysis and publication of data and results.