A Good Day to Hang out the Laundry, or a 10% Chance of Rain? 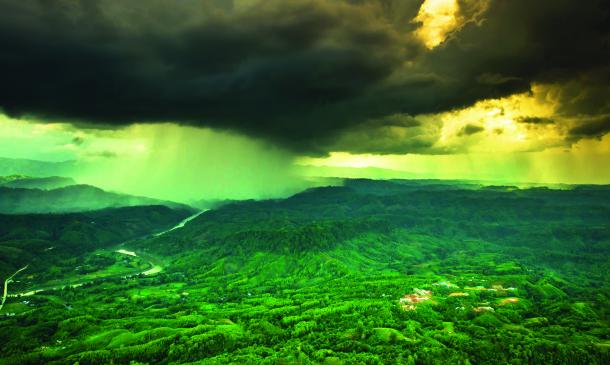 A Good Day to Hang out the Laundry, or a 10% Chance of Rain?

Historian Dr Alexander Hall is an Associate Director of the Centre for Science, Knowledge and Belief in Society at Newman University in Birmingham, UK. His 2012 PhD thesis, Risk, Blame, and Expertise: The Meteorological Office and extreme weather in post-war Britain was recently awarded the 2016 Marc-Auguste Pictet prize for the history of science by the Société de Physique et d’Histoire naturelle de Genève.

Recent media and social media clamour that we are now living in a “post-truth world” has raised concerns with some scientists; however, to take such claims at face value would paint an overly simplistic and deeply ahistorical picture. While 2016 may have had its surprises, the problems it presented for those concerned with communicating facts and figures to both specialist and general audiences should come as no real shock.

Meteorologists and climatologists have long dealt with the challenges that relate to empirically measuring and forecasting the atmosphere’s myriad dynamic patterns and to communicating such complex data to the public. In a future where the intensity and frequency of extreme weather events are expected to increase due to climate change, the ability to accurately, succinctly and convincingly relate forecasts and warnings to the public will be even more important. This article will explore some of the history of public forecast communication in the United Kingdom (UK), exposing tensions between scientific experts and the general public.

Blame it on the weatherman

One of the most infamous incidents of miscommunication in a weather forecast concerns the British Broadcasting Corporation (BBC) weatherman Michael Fish’s on-air comment prior to the Great Storm of 1987. Fish, a meteorologist for the UK’s national weather service, the Met Office, began his forecast on 15 October 1987 by remarking, “Earlier on today, apparently, a woman rang the BBC and said she heard that there’s a hurricane on the way. Well, if you’re watching, don’t worry – there isn’t.” The following morning, the country awoke to devastating scenes. With gusts recorded of over 160 km/h and sustained wind speeds of over 130 km/h, the extratropical cyclone that battered the south-east of the UK as the nation slept on 15-16 October 1987 was the most powerful storm to hit the region since the Great Storm of 1703. In the UK alone, the storm resulted in 19 deaths, the destruction of approximately 15 million trees, extensive power cuts and insured damages of
what was then a global record of £ 1.4 billion (US$ 2.3 billion at the time).

Rather than just for its severity and the destruction it caused, the storm is often remembered for Fish’s infamous forecast and the lack of clear severe weather warnings from the Met Office. The storm, its aftermath and its subsequent cultural memory present a late twentieth-century snapshot of the British public’s expectations in relation to extreme weather and their relationship with the expert scientific organisation communicating on the risks posed by such extreme meteorological events, the Met Office.

In the immediate aftermath of the storm, the media were quick to question the weather service. National newspapers led with headlines such as “Met men fail to predict ‘worst recorded storm’” and “Why didn’t they warn us?” Many criticisms, including those of how late the public warning had been issued, stemmed from a lack of understanding of Met Office procedure. The Met Office had in fact issued a warning four days earlier for severe weather on 15-16 October.

Official gale warnings for the English Channel were sent out early on 15 October, and all television and public radio broadcasts that day warned of strong winds. However, because the two different computer models operated by the Met Office produced equivocal forecasts, no warnings were issued for inland gales. Specific warnings were sent to civil agencies such as British Rail and the London Fire Brigade through the late hours of 15 October, and an emergency warning was issued to the public via radio at 1.20 a.m. on 16 October. In tempering criticisms of how late this public warning came, Professor John Houghton, then Director-General of the Met Office, highlighted that under the established emergency warning system, public warnings were only to be issued within three hours of severe weather, and only once it was almost certain to occur.

An internal inquiry into events called for revision of the content and style of television presentations and a complete review of how the Met Office dealt with the press and the media, yet it determined Michael Fish’s use of the term “hurricane” to be merely “unfortunate”. The inquiry considered such language to be “part of the style of delivery of the forecasts, aimed at making them more interesting rather than a dry repetition of the facts.” This conversational style had long been a feature of public forecasts in the UK.

This well-remembered incident was not the first time a television forecaster was blamed for an erroneous forecast, nor the first time that their language and delivery had presented a problem. Such cases go back to the very beginning of televised forecast presentations.

The face of British weather forecasts

The first-ever televised forecasts in the UK to feature a meteorologist on screen were launched by the Met Office in partnership with the BBC in January 1954. These “in vision” forecasts were an attempt to improve the visual aesthetics of televised weather and to educate the public in meteorological matters.

Yet giving the weather forecast a face led to an unexpected response from viewers.  Almost as soon as the new format was introduced, the BBC began to receive letters blaming the presenters for inaccuracies in their forecasts. Whilst criticism of inaccurate forecasts was nothing new, the manner, swiftness and volume of the blame directed specifically at the presenters was unprecedented. This was in part influenced by the fact that the person appearing on screen was no ordinary television presenter, but rather an expert meteorologist.

The Director of the Met Office personally responded to most of the letters, on one occasion stating: “I think that the meteorologist should be regarded more as an adviser than as a prophet … The difficulty, however, is to strike a balance between the professional chart with its mass of hieroglyphics [sic] and the extremely simplified version which will be intelligible to the average viewer."

The forecasters had come up against what science communication theorists were later to identify as a key weakness of the “deficit model’s” dichotomous approach, in which attempting to communicate with a broad spectrum of society with varied levels of education would always have limited success. In developing the new format, the BBC had encouraged the Met Office to embrace more engaging language rather than the dull, scientific terms of established professional practice. Thus, the new faces of the weather attempted to connect directly with the viewer: in his first broadcast, meteorologist George Cowling informed housewives that the windy weather would make it a good day to hang out the laundry. In addition to being more engaging than “there is a high probability of wind today”, such language also imparted a greater sense of certainty and personal connection.

By late 1953, the Met Office Director had already proposed putting a senior officer in charge of public services, with the duty of advising the Deputy Director of Forecasting on the nature, content and wording of all information supplied to the public. Nonetheless, the Met Office team had difficulty keeping the language engaging enough to appeal to a broad spectrum of viewers, whilst at the same time clearly communicating uncertainty, probability and reasons for errors.

Those at the Met Office who saw the new format as an opportunity to disseminate their forecasts and educate the public were surprised by instances of wanton blame-casting. They imagined that if the general public were better educated about how weather systems and the forecasting process worked, then surely their understanding of the fallibility of forecasts would increase. Such an instinctive view oversimplified the relationship between risk perception and blame, failing to account for the problems of information transfer that occur when communicating risk.

The formative technology of television allowed officials at the BBC to experiment, not only with who would present the new format, but also with how the forecast should be delivered. Now that there was a presenter, should the maps be more complex? Which elements should be printed and which should be drawn live on air? During trials in 1953, both the Met Office and the BBC put a great deal of time and effort into determining how complex weather forecasts could be visually presented so as to be understandable to the general public.

Met Office officials had already faced the difficulty of simplifying complex codified synoptic charts when producing forecasts for newspapers, and the technical limitations of television cameras had initially forced forecasters to create even simpler charts. Now, with the addition of a moving element in the form of the meteorologist drawing live on air, the process had become even more challenging. Emphasizing the development of the synoptic picture by affording yesterday’s and today’s charts as much airtime as tomorrow’s allowed the forecaster to explain any errors, which helped to mitigate blame and preserve the viewers’ trust. However, as they struggled to find a balance between a comprehensive explanation of all possible outcomes and a succinct, coherent weather picture, Met Office officials continued to be blamed for inaccurate weather forecasts.

The teams involved with the television project had a rudimentary understanding of the fact that the language, face and visual aspect of the forecasts were important. However, they did not predict that presenting probabilistic forecasts in deterministic language that viewers could relate to, would have a significant impact on the development of the public’s risk perception and their expectations of weather forecasts.

The Met Office’s position as a prominent disseminator of science communications and the challenges this position brings for a government-funded body aiming to remain objective and scientific were acknowledged in a 2012 parliamentary inquiry, conducted by the House of Commons Science and Technology Committee. The inquiry stated that:

an accurate forecast is of little use if it is not communicated well and understood by the customer. The Met Office should work with broadcasters to improve communication. In particular, the inherent uncertainty in longer-term forecasts should be clearly explained and we are keen to see broadcasters make greater use of probabilistic information in their weather forecasts.

So whilst much has changed since the early Met Office and BBC forays into televised forecasts, the tension between probabilistic forecasts and deterministic language remains. Despite changing forecast technologies and new digital media channels, the way that people interpret, understand and act upon weather forecasts and warnings has stayed largely the same. In order for the public’s potential reaction to any given forecast to be truly understandable, the manner in which the forecast is presented and communicated to the end user must be more closely analysed. In addition, the scientific activity that goes into the making of each meteorological forecast, extreme weather warning or climate scenario must be made more transparent to the public. The history of meteorology provides a compelling narrative and the physical means to open up this scientific activity to the public. Whether it is achieved through museums, the media, the classroom or new online initiatives, openness about uncertainty is essential.