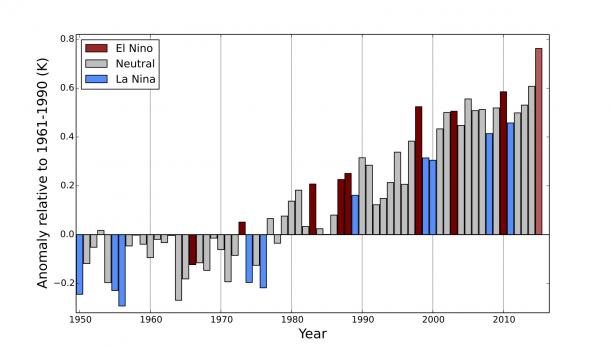 In the last few months, 2015’s status as the warmest year on record has been making headlines around the world. The WMO annual Statements on the Status of the Global Climate are an important part of the global climate monitoring that has arrived at this conclusion. Now, for the first time, WMO has issued a five-yearly Statement on the Status of the Global Climate, covering 2011–2015.

Looking at the climate on a five-year timescale allows us to gain a medium-term perspective on recent global climate.This enables us to step beyond the year-to-year influence of major drivers of interannual variability such as the El Niño Southern Oscillation, which have swung from strong La Niña conditions in 2011 to one of the strongest El Niño events on record in the second half of 2015.

The Statement allows up-to-date reporting on some key variables analysed in the Intergovernmental Panel on Climate Change (IPCC) Fifth Assessment Report. It also allows more comprehensive reporting on significant climatic events that extend over a number of years such as the severe multi-year droughts that have affected parts of Brazil and western United States of America (USA).

The warmth of the last five years has been significant almost worldwide – the period being the warmest on record for every continent except Africa, where temperatures fell only 0.01 °C short of the 2006–2010 record. Some parts of the world had cool individual years, but almost nowhere was consistently cool across the five-year period. Most continents also set annual records during this period.

Consistent with the high annual mean temperatures, significant heatwaves were a common occurrence during the five-year period. While no single event had the extreme impacts of the 2003 central European or 2010 Russian Federation heatwaves, many parts of the world still experienced heatwaves in which records were broken over large areas, sometimes by big margins.

Multi-year droughts in several parts of the world

The 2011–2015 period featured significant multi-year droughts in several parts of the world, most of which are still ongoing. Perhaps the most significant occurred in Brazil.The US southwest also experienced protracted drought during the period. In 2014 and 2015, dry conditions were exacerbated by record high temperatures. Significant multi-year drought also affected parts of eastern Australia from early 2012 onwards. A more recent, but still developing situation, is occurring in southern Africa, with poor rains in the 2014/2015 rainy season being followed by a worsening of conditions in the first part of the 2015/2016 summer.

Shorter-term droughts also had major impacts across the world. A severe drought in the Horn of Africa in 2010/2011 was a significant contributor to a disastrous famine in Somalia in late 2011 and early 2012, which caused more than 250 000 deaths. Drought in the US and adjacent areas of northern Mexico caused agricultural losses of the order of tens of billions of dollars.The arrival of El Niño in 2015 brought significant drought to a number of other areas, including Indonesia – which also suffered from severe forest fires – the islands of the western South Pacific, Central America and the Caribbean, and parts of the Indian subcontinent.

Although improved forecasts and warnings, along with improved disaster planning and emergency response, are reducing the number of events with catastrophic numbers of casualties, there were still events in which a thousand or more lives were lost in the last five years.

The other weather-related event to cause casualties on such a scale occurred in June 2013, when floods and associated landslides in the Himalayan foothills in northern India left more than 5 800 people dead or missing.

A number of events during 2011–2015 also caused large economic losses. One standout example was Hurricane Sandy, which hit east coast of the US and Canada in October 2012, causing an estimated US$ 67 billion in damage. Another was the prolonged flooding in southeast Asia, especially Thailand, between July and October 2011. In addition to claiming over 800 lives, the flooding caused tens of billions of dollars in economic losses, much of it through the disruption of industrial activities.

The Antarctic ozone hole stabilized in the period from 2011–2015, but did not show strong evidence of recovery. Over the last 20 years, there has been no clear trend in the ozone hole but there is substantial interannual variability depending on seasonal atmospheric conditions.This is consistent with expectations that reduced emissions of ozone-depleting substances, following the adoption of the Montreal Protocol, would prevent further significant deterioration, but that it would take until the mid-twenty-first century for substantial recovery to occur. Years 2012, 2013 and 2014 had relatively small ozone holes by recent standards, but 2015 had the largest hole since 2006. 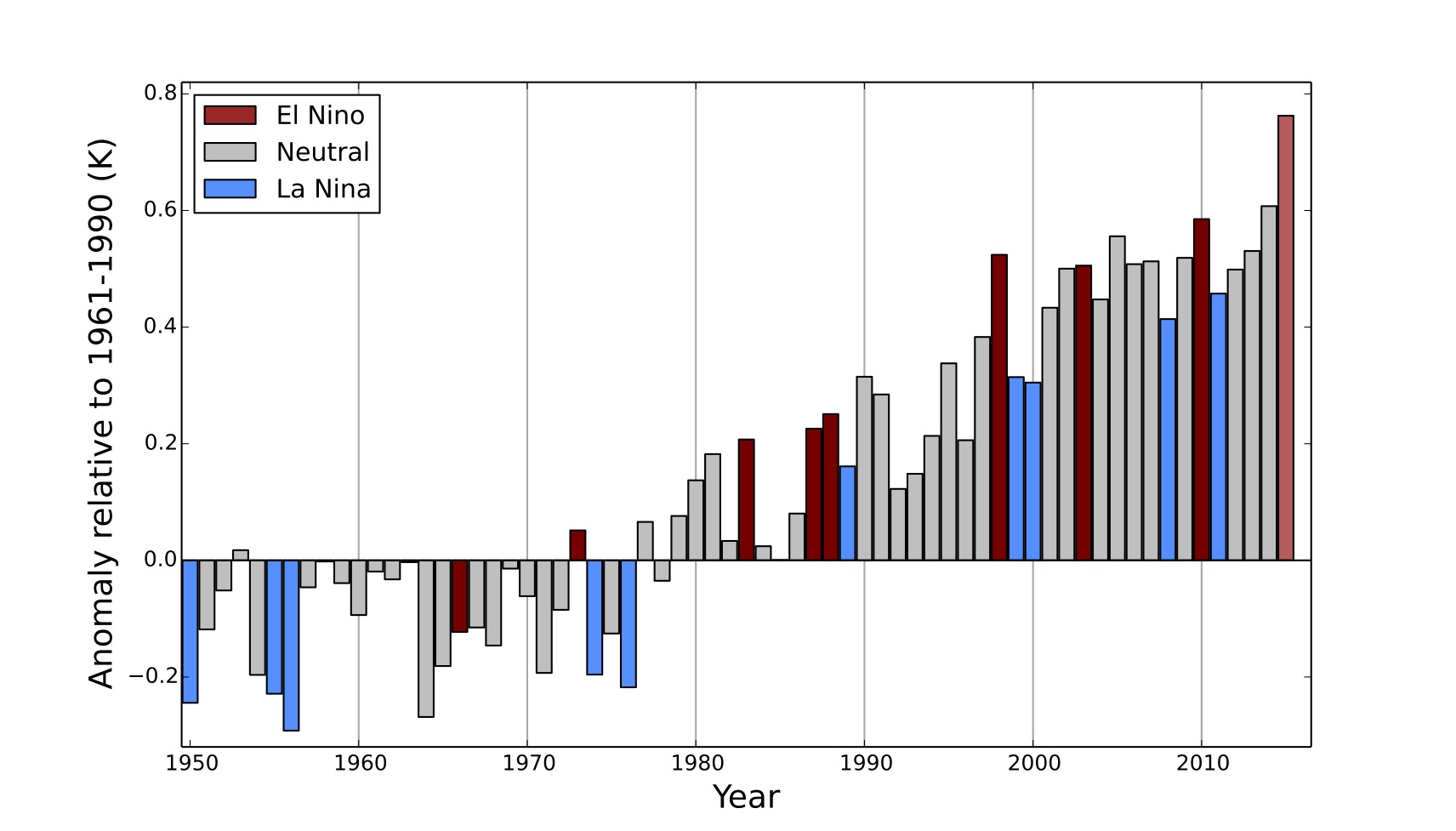 Global annual average temperatures anomalies (relative to 1961-1990) based on an average of three global temperature data sets (NOAA, Met Office and NASA) from 1950 to 2015. Bars are coloured according to whether the year was classified as an El Niño year (red), a La Niña year (blue) or an ENSO-neutral year (grey). Note uncertainty ranges are not shown, but are around 0.1°C.

Widespread melting of ice, except in Antarctic

Summer surface melting of the Greenland ice sheet also continues at above-average levels, with 2012 being a particularly extreme year. Mountain glaciers have also experienced continued decline in most continents. The picture is less clear for the Antarctic ice sheet, which has large measurement uncertainties. Different studies have all concluded that continued net ice loss is occurring in west Antarctica, but results are less consistent for east Antarctica.

In contrast, for much of 2011–2015, Antarctic sea-ice extent was above the 1981–2010 mean value, especially for the winter maximum. At times, particularly in 2014 and early 2015, sea-ice extent in the Southern Ocean was at record levels for the time of year. However, an unusually slow freeze-up in the 2015 winter saw sea-ice extent return to near-normal levels by the second half of 2015.

Global sea levels continued to rise during 2011–2015, which is consistent with the longer-term trends. The interannual variability in global sea level during 2011–2015 was high. The period began with a sea level about 10 mm below the long-term trend value in early 2011, due to the strong La Niña of that time.The period finished with a sea level about 10 mm above the long-term trend because strong El Niño conditions developed in the second half of 2015.

Scientific assessments have found that many extreme events in 2011–2015, especially those relating to high temperatures, have had their probabilities substantially increased as a result of anthropogenic climate change. It is likely that studies yet to be completed on 2015 events, and longer-term events (such as droughts) that continued into 2015, will show similar results.

There have also been events such as the unusually prolonged, intense and hot dry seasons in the Amazon basin of Brazil in both 2014 and 2015. While it cannot yet be stated with cofidence that these are part of a long-term trend, they are of considerable concern in the context of potential “tipping points” in the climate system as identified by the IPCC Fifth Assessment Report.

Raising awareness and assessing the state of the climate

The five-yearly Statement was released in provisional form on 25 November 2015, alongside the provisional annual Statement for 2015. It draws heavily on the annual Statements. It also makes extensive use of material reported by Members and related organizations (either directly to WMO, or through their own reports and websites), other WMO programmes (such as Global Atmosphere Watch), Regional Climate Centres and, and the annual State of the Climate reports published in the Bulletin of the American Meteorological Society. As final 2015 data will not be available for some elements until well into 2016, and studies on the attribution of 2015 events to climate change will also continue to be published over the next few months, the final Statement is planned for release only once all relevant information is available. This is expected to occur in late 2016 or early 2017.

WMO climate reports have been instrumental in raising awareness on the year-to-year and multi-year climate variability and trends. The participatory approach involving world-leading institutions and centres in the process of these publications and their peer review have allowed an ownership by WMO Members and ensured their authoritative status. Hence, these reports have complemented effectively the IPCC reports in providing useful and up-to date climate information for policymaking at the international level.

Since the 21st session of the Conference of Parties (COP21) of the United Nation Framework Convention on Climate Change (UNFCCC) took place in Paris in December 2015, such reports will be even more prominent in assessing the state of the climate. They will also be used for detecting possible stabilization or inflection in long-term trends and extreme events as a result of an eventual limitation of or reduction in greenhouse gas concentrations in the atmosphere. These reports should, therefore, be sustained over decades as the results of mitigation efforts will take a long time to become observable.

Robust analysis of climate variability and change is not possible without reasonably long time series data. Meteorological observations have been recorded for decades and, in some cases, for centuries. However, computers are a relatively new invention so most of those observations were recorded on paper. Preservation and digitization of paper records into computer-readable formats – data rescue – requires significant eforts. WMO recently implemented the International Data Rescue portal I-DARE to serve as a single-entry point for such activities worldwide. It ofers technical guidelines on data rescue, tools and inventories of to-be-rescued data as well as ongoing and planned data rescue projects. The latter element helps to coordinate data rescue eforts worldwide, allowing prioritization of projects and identification of gaps.

1 Blair Trewin, Lead author of the 2011-2015 Statement on the Status of the Global Climate