The HimawariCast Project: Bringing the power of new satellite data to the Asia-Pacific region 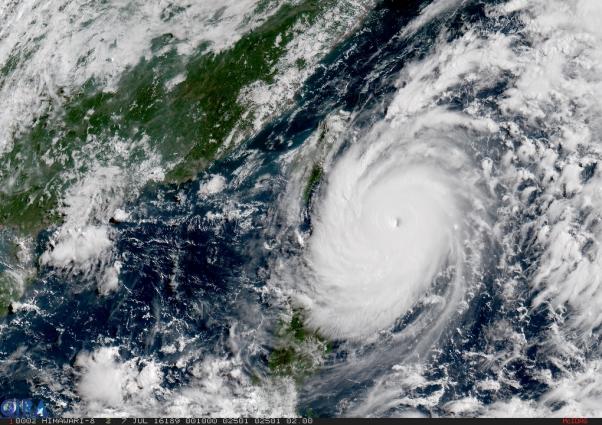 The HimawariCast Project: Bringing the power of new satellite data to the Asia-Pacific region

At 05:16 UTC on 7 October 2014, the Japanese satellite Himawari-8 atop an H-IIA rocket took off from the Yoshinobu Launch Complex Pad 1 at the Tanegashima Space Centre in Japan. The launch was flawless and the satellite arrived a few weeks later at its final geostationary orbiting position 36 000 km above the equator at 140.5°E, just north of Papua New Guinea in the Western Pacific Ocean.  It was the first of a new generation of satellites that would start operations in the 2015-2021 timeframe. These new meteorological satellites have enhanced observation capability that will bring benefits, but also challenges for the National Meteorological and Hydrological Services (NMHSs). WMO and the Japan Meteorological Agency joined forces on the HimawariCast Project in order to assist them.

Geostationary meteorological satellites provide image data for large areas of the Earth at high frequency, and are vital tool for observing the development of weather systems from space. They are useful for monitoring rapidly developing weather systems like tropical cyclones, extra-tropical storms, severe convective systems, volcanic ash clouds, and sand and dust storms. In the Asia-Pacific region, typhoons and tropical cyclones are life-threatening meteorological hazards. All NMHSs continuously strive to improve their early warning systems to better monitor and detect them. 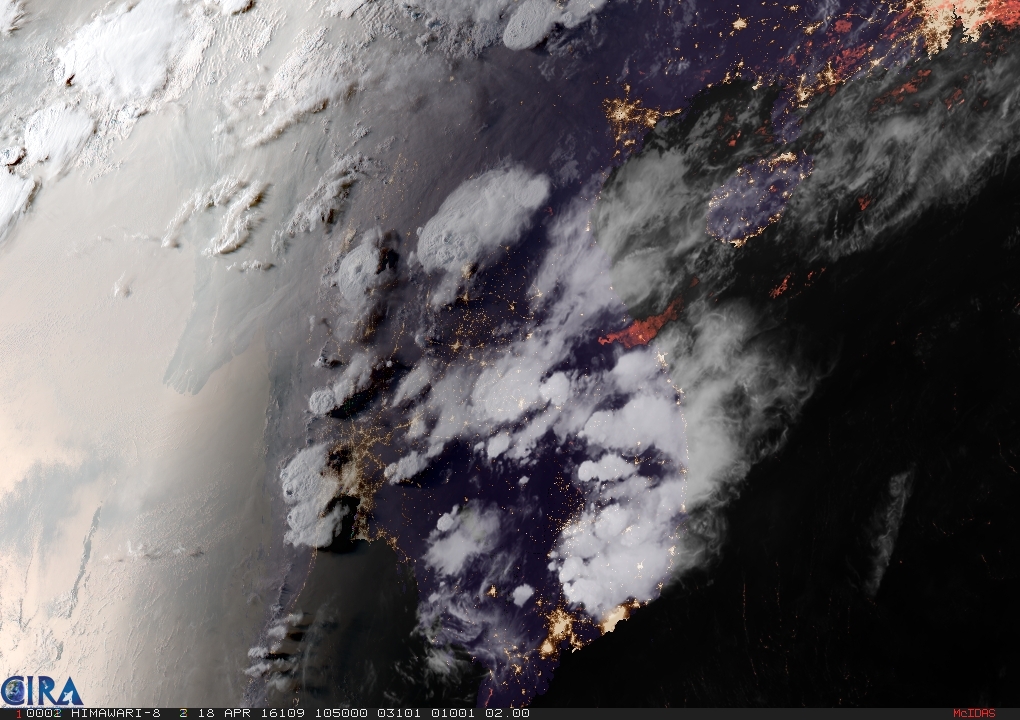 Generally, data acquired from Low-Earth orbiting satellites provide the most vital input to Numerical Weather Prediction (NWP) models for global and regional forecasting. However technological and scientific developments over the last 25 years have made it possible for geostationary image data to be transformed into quantitative products that also have positive impact on NWP models and specifically provide information for areas where other observations are sparse, like oceans and deserts.

China, EUMETSAT (the European Organisation for the Exploitation of Meteorological Satellites), India, Japan, Republic of Korea, Russian Federation and United States of America (U.S.) maintain geostationary satellite programmes positioned above the equator in what is called the “geostationary ring”.   They form an optimised global system, supervised by satellite agencies that work together in the Coordination Group for Meteorological Satellites (CGMS) and the WMO Space Programme, which standardizes processing and distribution of data to serve global users, in particular WMO Members.

The replacement of the existing global system by a new generation of geostationary satellites started with the Himawari-8 launch. With its enhanced observation capability of 16 bands (channels), Himawari-8 is expected to improve the performance of NMHSs in the Asia-Pacific region in a variety of fields, including weather forecasting, climate monitoring, disaster risk reduction and transportation safety.

With the previous generation satellite, MTSAT-2, due to be taken out of service at the end of 2015, forecasters would depend fully on the data from Himawari-8 from that time on. That left very little time to get NMHSs on board for Himawari-8. Preparation and training for the processing and use of Himawari-8 data across the region would be on a tight schedule.  But the bigger issue was the volume of data generated by Himwari-8: around 50 times that of MTSAT-2. How could the NMHSs access and use the massive increase in the data disseminated to them?

JMA wanted to ensure that the Asia-Pacific NMHSs were ready to use the image data from the new satellite under its operation. The original data plan was to use an internet cloud service. But JMA quickly recognized that the massive data volumes and the limited Internet bandwidth available in large parts of the Asia-Pacific region would make that solution impracticable for some NMHSs.

JMA decided to complement Internet access with a satellite-based distribution system, using commercial telecommunications satellite and low-cost DVB-S reception technology. The system, modelled on the highly successful EUMETCast system implemented by EUMETSAT in 2003, was named HimawariCast. It would provide a subset of Himawari-8 image data, equivalent to that disseminated directly from the MTSAT-2.

A typical HimawariCast reception system is composed of low-cost, off-the-shelf components with a moderately sized (2.4 m) reception antenna.  Even so, many NMHSs, especially the smaller ones, could not stretch tight budgets further to cover these costs. Therefore, JMA and WMO decided to initiate and fund a project to install HimawariCast receiving and processing systems in the NMHSs of 14 countries: Bangladesh, Cambodia, Federated States of Micronesia, Kiribati, Mongolia, Myanmar, Nepal, Palau, Papua New Guinea, Samoa, Thailand, Tonga, Tuvalu and Viet Nam.

To guide the project, the WMO Commission for Basic Systems (CBS) together with the Coordination Group for Meteorological Satellites (CGMS) developed best practices for achieving satellite user readiness. The WMO Development and Regional Activities Department and the Space Programme, together with JMA and project partners, were responsible for the final technical specifications of the systems, for the selection of the supplier and for overseeing the testing and deployment of the reception systems.

WMO selected Oriental Electronics, Inc. (ORI) as the supplier in April 2015 and planning of the factory testing, installation and acceptance started. ORI also performed site visits to all recipient NMHSs, to confirm the suitability of the locations where the systems were to be installed and to identify issues that could affect their installation and operation. These revealed eminent construction of a new monorail transportation system in Dhaka, Bangladesh, that would impact the Project and the need for coordination with planned relocations of NMHS offices in Mongolia, Palau, Tonga and Viet Nam. However, the main concerns related to integration of the HimawariCast with existing systems and the need to provide forecasters in other locations with access to HimawariCast system products. Time was a critical factor: that same Spring, HimawariCast had started routine dissemination of MTSAT-2 data. In July 2015, JMA declared Himawari-8 operational, after which the old and the new distribution systems continued in parallel. However, MTSAT-2 data would only continue until 4 December 2015. After that date, the satellite would no longer be able to maintain its nominal position, and for NMHSs to use its data: it was crucial that the new HimawariCast systems be fully operational by then to avoid a gap in the provision of satellite data for the NMHSs.

The strong partnerships and coordination between WMO, NMHSs, JMA and ORI yielded great results. Nine countries now have the HimawariCast system in operational use. The remaining five will have them by early 2017. In addition to the technical training provided by ORI, JMA has been carrying out expert visits to the recipient NMHSs to conduct seminars to maximize the benefits they can derive from Himawari-8 data. So far, the feedback has been very positive.

The success of the HimawariCast Project is in addressing the challenges in an end-to-end manner by providing near-real-time access to data via satellite broadcast, facilitating the acquisition and processing of data, and ensuring that NMHS staff, both engineers/technicians and forecasters, are fully trained on the new systems. As pointed out the by WMO Secretary-General Petteri Taalas, “The joint efforts by WMO and JMA to facilitate the reception and use of new generation satellite data can be a model for WMO support for other regions in coming years.”

Capacity development is crucial for a successful introduction of new satellite systems in the WMO regions. WMO and JMA will assist all recipient NMHS with the sustainable operation of HimawariCast systems for three years after the expiry of the 2-year warranty period for the systems. In addition, WMO and its partners will support the participation of NMHS representatives in the annual Asia-Oceania Meteorological Satellite Users Conference, associated training events and meetings of regional satellite user requirements groups. This will help to sustain the capacity developed in the NMHSs through the HimawariCast project.

The joint efforts by WMO and JMA to facilitate the reception and use of new generation satellite data can be a model for WMO support for other regions in coming years.

Former JMA Director-General and Japan’s Permanent Representative to WMO, Mr Noritake Nishide stated with pride, “I am convinced that the new systems installed in countries through this project will further improve capability in early detection of, and responses to, severe weather events of recipient countries.”