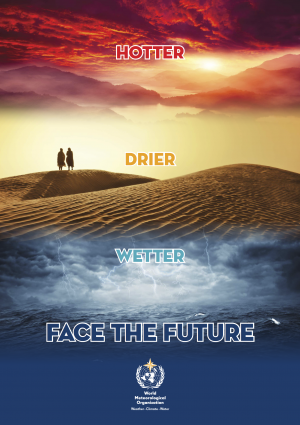 Our climate is changing. This is not just a future scenario. It is happening now. The climate will continue to change over the coming decades as more and more heat-trapping greenhouse gases emitted by human activities accumulate in the atmosphere.

Each of the past several decades has been significantly warmer than the previous one. The period 2011–2015 was the hottest on record, and the year 2015 – with an extra boost from a powerful El Niño – was the hottest since modern observations began in the late 1800s.

But rising temperatures tell only part of the story. Climate change is disrupting some weather patterns, and it is increasing the frequency and intensity of certain extreme weather events, such as heatwaves, droughts and heavy rainfall.These ongoing changes provide a foretaste of a hotter, drier, wetter future.

It is still possible to minimize the damage. In December 2015 the world’s governments unanimously adopted the Paris Climate Agreement, seeking for rapid and deep cuts in greenhouse gas emissions.This historic agreement commits all countries to undertake ambitious efforts to respond to the urgent threat of climate change on the basis of their “common but differentiated responsibilities.” It also addresses financial support to developing countries, climate resilience and adaptation, technology transfer, capacity-building, and education, training and public awareness.

The Sendai Framework for Disaster Risk Reduction (2015-2030), agreed in March 2015, and the emphasis on the need to tackle disaster risk reduction and climate change adaption when setting the Sustainable Development Goals, in September 2015, place the onus on WMO and its Members to provide more and better weather, climate and water-related services.

However, scientifc advances are making it possible to produce increasingly useful climate information and services to support climate resilience, adaptation and mitigation. As highlight throughout this issue of the Bulletin, WMO and the global network of National Meteorological and Hydrological Services of its Members have a major role to play in providing the scientific observations, research and operational climate services that society will need in order to face the future.

WMO and the global network of National Meteorological and Hydrological Services of its Members have a major role to play in providing the scientific observations, research and operational climate services that society will need in order to face the future.