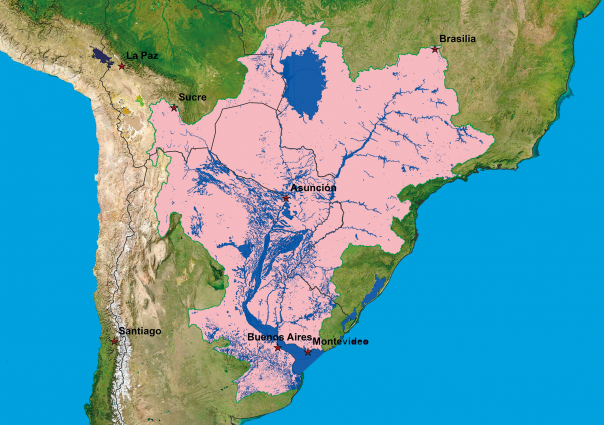 The 1969 Treaty of the La Plata Basin, the first instance of Southern South American integration, yielded important infrastructure development – in particular bridges and reservoirs – and became the framework for the sustainable management of water resources across the region. The Treaty was drawn up between 1967 and 1969, more than 20 years before the creation of MERCOSUR[1], when the International Hydrological Decade was under way. It brought a global hydrological approach to a basin of more than 3 million square kilometres, which is home to more than 100 million people belonging to 5 countries: Argentina, Bolivia, Brazil, Paraguay and Uruguay.

The Treaty established the Intergovernmental Coordinating Committee of the La Plata Basin Countries (CIC). At the time, a pluviometric and hydrometric monitoring network, which dated back to the beginning of the twentieth century, covered a large part of the La Plata Basin. Therefore, conditions were already in place to facilitate the vision of WMO and the International Hydrological Decade of a system’s approach of water resources. Increasing food and energy production and the presence of populations at risk of flooding also require a better knowledge of the Basin’s hydrometeorological regime. Nevertheless, the constant coordination among the many national institutions responsible for the Basin’s natural resources was and is a challenge, but they all seek to ensure sustainable development.

Weather forecasting and climate characterization are global activities that require access to observations well beyond the borders of countries, continents and oceans. Very early on in its history, WMO and its Members understood the importance of observation and data exchange, and their integration in models, to strengthen weather predictions and forecasts at the global, national and community levels. A milestone in the integration of the meteorological community was the establishment of the WMO World Weather Watch Programme in 1963, which developed into the WMO Integrated Global Observing System (WIGOS). Modelling also became more complex and sophisticated to the point where climate models, for example, now integrate key components such as atmosphere, oceans, land masses and the interaction between them.

However, the situation is different in hydrology. Hydrological information has a productive value, unlike data on precipitation which can only be monitored but not managed. For example, hydrological data is essential to water management for hydroelectric plants and irrigation facilities (direct intakes and reservoirs). Because of this value, producers of hydrometric data have, historically, been very reluctant to share information. Nevertheless, integration in a basin of various water uses is leading to the integration of the databases developed by different users to meet their own needs.

In the La Plata Basin hydrological knowledge and data are currently dispersed and not always easily accessible. One of the challenges is in bringing the working groups on hydrology, in particular operational hydrologists, together. It is operational hydrologists who make decisions every day concerning, for example, water supply to a population, production of hydroelectric energy and food, and protection of people’s life and belongings.

Meteorological and hydrological services are separate entities in the La Plata Basin countries of Argentina, Brazil and Uruguay. In the other two countries, Bolivia and Paraguay, they are part of the same institution, however, that does not ensure their integration. There is still a need to inculcate in both communities the advantages of thinking and working together – meteo­rologists are not simply providers of information for the hydrologists.

During a visit to the Institute of Hydrology, Meteorology and Environmental Studies (IDEAM), Colombia, the advantages of meteorologists and hydrologists working together in an integrated manner were highlighted. Here are a few:

Hydroelectric reservoirs, due to their own needs and economic value, usually have teams of meteorologists and hydrologists working together. This could be an interesting example to follow. In the La Plata Basin the coordination of the three binational reservoirs is, therefore, strategically important.

WMO Regional Association III (South America) has been a pioneer in promoting the integration of the meteorological and hydrological communities. It has already organized two joint meetings of its three working groups: that on infrastructure (which includes weather forecasting), that on climate, and that on hydrology and water resources. The Association is also promoting joint monitoring of drought in the Region, through the integration of meteorological and hydrological indicators, and joint forums on hydroclimate in addition to those of climate forecasting.

Despite these efforts, in the past 15 years, various initiatives to coordinate meteorology and hydrology within the institutional framework of the Treaty of the La Plata Basin have been left incomplete. In 2014, for example, the CIC Secretary-General attended the WMO Regional Association III session that considered the development of the WIGOS-Southern South America-Plata Basin (WIGOS-SAS-CP) programme. The main objective was to create a homogeneous hydrometeorological network in southern South America, particularly in the La Plata Basin, through WIGOS. A prototype was developed but the programme was not implemented.

Use of the WIGOS framework is essential for the integration of hydrometeorological information. The objective of integration is to make hydrological and meteorological data and products available to both communities. To achieve effective regional integration it is important that the conceptual basis of WIGOS is established in each country and that daily coordinated work is encouraged.

The CIC La Plata Basin Framework Programme (2011–2016) adopted a development methodology that is strongly based on the participation of institutions, together with their decision-makers and technical experts. Those who took part in the project learned the value of regional integration and of speaking with one voice. The advantages were also clear to USAID, which will contribute to the final implementation of the WIGOS-SAS-CP system during 2018–2019 through WMO. There will be benefits, principal among them, the possibility of extending the flood early warning system to the entire La Plata Basin.

The attempt at integration of the meteorological and hydrological communities stemming from the CIC La Plata Basin Framework Programme has not yet been institutionalized. It is expected that the continuation of technical collaboration projects will form the basis of major institutional agreements in Basin bodies such as CIC, in coordination with WMO.

Acknowledgements: I would like to thank Eng. José Luis Genta, CIC Secretary-General (2011–2015) for his contribution to this article.