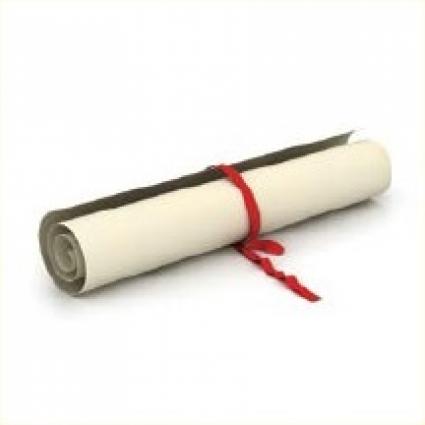 The 57th International Meteorological Organization (IMO) Prize was awarded to Professor Zaviša Janjić in recognition of his outstanding life-long contributions to the advancement of theory and practice of atmospheric modeling and numerical weather prediction, in particular, for the development of generations of atmospheric models based on his innovative numerical and parameterization schemes. Professor Janjić also took a leading scientific role in the development of the Hydrometeorological Institute and Belgrade University (HIBU) model, the NCEP Eta model, the Weather Research and Forecasting Nonhydrostatic Mesoscale Model (WRF NMM) and the new, unified, multi-scale NMMB. These have been used for research and weather forecasting all over the world, inspiring the work of many scientists and producing forecasts reaching millions of users. At the award ceremony in May 2013, Professor Janjić gave the Bulletin a brief interview.

Which of your notable achievements makes you proudest?

"There have been many challenges in my career. Some of them took me years to resolve, and some I have not yet resolved. Apart from teaching, I spent most of my career working in weather services. In such environments one is permanently exposed to problems requiring immediate responses. It was challenging, but also scientifically stimulating, and I believe very beneficial since I was in position to see a bigger picture and respond in a more coherent way to various issues I had to deal with. 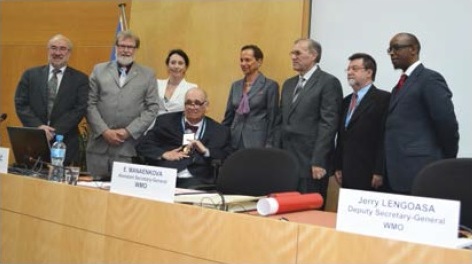 The award ceremony in May 2013

"Early in my career, I focused on numerical methods for discretization of hydrostatic dynamics. As a graduate student, I found a stable and efficient solution for the grid-decoupling problem on semi-staggered horizontal grids by targeting only the most relevant terms in the continuity equation. That was my first scientific paper in a respectable scientific journal.

"Another problem I was looking at was the pressure gradient force error in terrain following coordinate systems and transformations of kinetic and potential energy through the "omega-alpha" term of the thermodynamic equation. Here, I gave an explanation of the pressure gradient force error, proposed a method for its minimization, and developed an energy conserving scheme for the omega-alpha term in the thermodynamic equation. Unlike with conventional time splitting, I kept the advection of pressure in the omega-alpha term in the fast mode group. In this way the system was split into energy conserving subsystems.

"However, the problem that always fascinated me is the nonlinearity of atmospheric flows. My work in this area was inspired by the work of Professor Akio Arakawa. His energy, enstrophy and momentum conserving Jacobian controlling the nonlinear energy cascade is perhaps the most significant contribution to numerical methods used in atmospheric models in the twentieth century. However, when I started looking at nonlinear flows, it was not even clear whether the proper application of the Arakawa Jacobian was possible on the semi-staggered horizontal grids. The first nonlinear scheme I designed conserved energy and enstrophy, but as I soon realized, the formal conservation of energy and enstrophy on the semi-staggered grids was not sufficient to provide effective control of the nonlinear energy cascade throughout the spectral range. Studying the Arakawa Jacobian further, I noticed some of its previously unknown properties, and utilizing these properties I developed a new advection scheme for the semi-staggered grids that conserved a number of integral properties, and controlled the nonlinear cascade more strictly than any other known scheme. As I hoped, the reward came in the form of remarkable computational stability and absence of computational noise in all the models from the HIBU model on, as well as in later successful replication of the form of atmospheric spectrum that was not just a cosmetic artefact produced by numerical filters. This is the achievement that I have been most proud of.

"Later, following the feature of the Arakawa Jacobian that each grid point exchanges fluxes with eight neighbouring points, I "isotropized" all divergence and advection operators. Also, I designed a temporary "minimum" physics. All these novelties I implemented first in the HIBU model. The work on the pressure gradient force error, omega-alpha term and my first energy end enstrophy conserving scheme were subjects of my D.Sc. thesis and a paper that brought me the WMO Research Award for Encouragement of Young Scientists. For a paper describing the technique preventing the sub-grid separation in the HIBU model, I got the WMO sponsored Borivoje Dobrilovic Trust Fund Award."

"The dynamics of the NCEP Eta model followed the same principles as that of the HIBU model, but in addition allowed the option of blocking the flow by step-like mountains. There were two major challenges for me here that marked the beginning of my more than 20 years long affiliation with NMC/NCEP. One was vectorization of the dynamics, and the other, much more complex, was the development of a comprehensive physics package (except radiation). This package included then up-to-date procedures for representing turbulence, surface processes, moist convection and stratiform precipitation. Concerning the step-mountains, I made a contribution to specification of internal lateral boundary conditions. The resolution of this problem was a precondition for application of the step-mountain blocking without violating favourable features of the HIBU model. The vectorized dynamics with the step-mountain option and the comprehensive physical package would be later known as the Eta model, which underwent significant further evolution and upgrades over the years of its service. Unfortunately, the representation of topography in atmospheric models still does not have a fully satisfactory solution, and still attracts attention of scientific community.

"Even though I also developed a viscous sub-layer model for the air-sea interface and a much more advanced land surface model, in the long run, my most notable contributions to the physical package development have been in the area of turbulence parameterization and the parameterization of moist convection. Responding to problems with convection in the Eta model, I generalized the scheme for deep convection to encompass a wide range of convective regimes and to provide a smooth transition to the grid-scale precipitation. For the shallow convection, I derived the closure from the second principle of thermodynamics. The Betts-Miller-Janjić (BMJ) scheme with these extensions and generalizations has been widely used.

"The issues I encountered with the Mellor-Yamada Level 2.5 turbulence model were a tougher challenge. The main problem was a singularity in the turbulence kinetic energy production and dissipation equation in case of convectively driven growing turbulence. Here, I devised the realizability criterion and developed a non-singular, unconditionally stable method for solving the turbulence kinetic energy equation in the unstable range. In the case of stable stratification, I derived a criterion for the master length scale from the internal relationships of the turbulence model. This criterion replaced the popular criterion based on stability. With the extended Mellor-Yamada-Janjić scheme, seamless application has been possible over the entire stability range, including convectively driven growing turbulence and free convection.

What changes or new approach did you take in your non-hydrostatic models for numerical weather prediction?

"Within the Weather Research and Forecasting (WRF) initiative, I developed a non-hydrostatic model suitable for numerical weather prediction (WRF NMM). This is the model that replaced the Eta in operations at NCEP, and provided one of the two existing WRF model dynamical cores. The WRF NMM core is also driving NCEP's Hurricane WRF forecasting model.

"Over the last few years, I have been developing a unified multi-scale non-hydrostatic model for a wide range of spatial and temporal scales (NMMB). This model is based on the experiences with the WRF NMM. The polar singularity problem in the global version is addressed by filtering tendencies of the basic model variables, thereby slowing down the motions on the scales that would otherwise be unstable. The regional NMMB already replaced the WRF NMM in operations at NCEP."

What areas have you identified as requiring further scientific research?

"Modelling of atmospheric processes has made a huge progress since the first promising attempts sixty years ago. However, there are a number of issues that still need attention. Some of them I will mention here, but this will not be an exhaustive list.

"The progress in atmospheric modelling has always been closely connected to advances in computer technology. The unprecedented computer power that we now have allows operational application of horizontal resolutions on the order of 10 km on the global scale. The parallel computer architecture is here to stay, and some widely adopted modelling paradigms may need to evolve in order to productively utilize the full power of parallel processing. Namely, application of local Eulerian methods and explicit time differencing is becoming more attractive in order to minimize communications between the processors working in parallel.

"On the global scales, the treatment of spherical geometry remains an issue. The straightforward latitude-longitude grid with local spatial and explicit time differencing avoids the two-dimensional non-locality inherent to Galerkin discretizations and implicit time differencing, and also requires narrower sub-domain halos. However, the polar filtering based on conventional fast Fourier transforms requires transpositions involving extra communications. So, research aimed at finding a better way of handling spherical geometry, and/or faster parallel Fourier transforms is under way.

"Another challenge on the global scale is that the limit of validity of the hydrostatic approximation is rapidly being approached. Having in mind the sensitivity of extended deterministic forecasts to small disturbances, we may need global non-hydrostatic models sooner than we think, and that is likely to bring additional problems with computational efficiency of nonlocal schemes.

"Another area that requires further research is cloud prediction and interaction between clouds and radiation. This issue is related to both microphysics and radiation parameterizations, and since the solar radiation is the source of energy driving the atmosphere, it is particularly important for extended range forecasting and climate studies."

What challenges do you see for the young generation of meteorologists?

"Nothing can compensate for atmospheric processes that have been ignored, or for inaccurate or inadequate initial and boundary conditions. This is why in the future I expect further system integrations, such as coupling atmospheric, land, ice and ocean models, and taking into account the effects of aerosols and atmospheric chemistry with increasing complexity. However, I believe that most of future improvements in deterministic forecasting will result from further refinement of data assimilation techniques and assimilation of more data types coming from additional observed data sources. This is where I think the contributions of younger generations will be most welcome."

What external factors contributed to your scientific research?

"I have not been living and working in a vacuum. During my career, I interacted with many great scientists, including my fellow IMO prize winners Aksel Wiin-Nielsen, Lennart Bengtson and Eugenia Kalnay. Also very important, and in many respects decisive, was the favourable and productive working environment as well as the understanding and support that I enjoyed at NMC/NCEP, particularly from Drs. Ron McPherson, Louis Uccellini, Steve Lord and Geoff DiMego. Lengthy discussions with Dr. Joe Gerrity helped me clarify and develop several important ideas, and I had a lot of help from other NCEP staff. I owe a lot to numerous other people with whom I interacted and cooperated, and to whom I am making an injustice by not mentioning them by name. Unfortunately, any list that I could make now would be incomplete, and therefore even more unjust. However, my career would have been much shorter, and all this would not have been possible, without encouragement and help from my family, and especially from my wife Gordana." 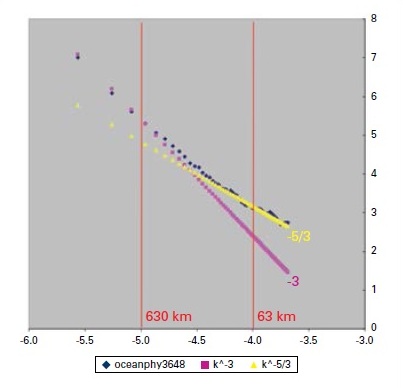 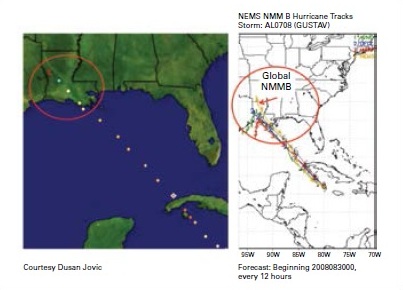 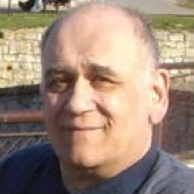 2007: American Meteorological Society Francis W. Reichelderfer Award: "For outstanding contributions to developments and implementation of NCEP limited-area weather prediction models (Eta and NMM). The numerical and parameterization schemes he developed ideally combine theoretical solutions, as well as a balance between elegance and practicality."