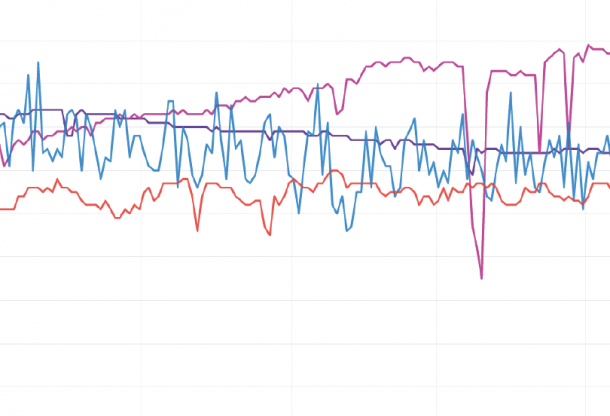 The ongoing COVID-19 crisis is impacting a broad range of activities in fields that are far from the immediate and obvious concerns related to public health. WMO activities in the areas of weather, climate and water are among them. Earlier in the year, during the first COVID-19 restrictions, the media devoted considerable attention to the potential effect on our activities. Now, a few months down the road and well into a second wave of COVID-19 and related restriction in many countries, this article provides a brief overview of the main impact on the observing systems and some – mostly speculative – discussion of the potential downstream repercussions on the quality of products and services.

The most immediate and dramatic impact has been a rapid and decline in the overall availability of aircraft-based observations (See Figure 1). Commercial aircraft measure wind speed and atmospheric temperature every few seconds as a matter of routine. They do this for their own avionics, not for meteorological purposes. However, a growing number of commercial airlines are making a subset of these measurements available to the WMO community in near-real time for operational purposes via their participation in the WMO Aircraft-Based Observing System (ABOS), one of the important networks under the WMO Integrated Observing System (WIGOS) umbrella. Over a two-week period during the early part of the crisis – late February and early March – the overall number of aircraft-based observations received by global numerical weather prediction (NWP) centres reduced to around 15% of the numbers typically received. Beyond this number, very large geographic variations in the impact were seen. Over Europe, with most national borders closed and therefore only a small minority of the flights being operated, the supply of aircraft observations essentially ground to a halt. Over the United States of America (US), on the other hand, many domestic flights continued operating. The availability of observations, therefore, stabilized at around 50% of the pre-COVID number.

Aircraft-based measurements provide profiles of meteorological variables – primarily temperature and wind speed and direction – during the ascent and descent phases of the flights. These observations complement the upper air soundings made by the radiosonde network, and are of particularly high value to NWP since, generally speaking, coincident profiles of wind and temperature tend to noticeably improve NWP skill (i.e. the quality of the resulting weather prediction). In addition to the ascent/descent profile measurements, commercial aircraft provide observations during level flight at cruising altitude. These flight-level observations are especially valuable over the ocean and in the Southern Hemisphere and other areas where in situ observations tend to be scarce. The observations provided by ABOS have a very significant beneficial impact on NWP skill.

In terms of mitigation steps, various WMO Members and their Global Data-Processing and Forecasting System Centres (GDPFS), including World Meteorological Centres (WMCs), have tried to compensate the lack of ABO by introducing additional observational data into their forecasting systems. For examples, some NMHSs, in particular in Europe, have launched additional radiosondes beyond their regularly scheduled twice-daily flights (see Figure 2), and wind measurements data from ESA’s Aeolus/ADM research satellite are now being assimilated routinely by some centres. At least two private companies made additional data freely available to certain NWP centres during the peak of the crisis in the spring of 2020. Those observations are normally available only on a commercial basis, namely so-called TAMDAR aircraft observations and a set of GPS Radio Occultation (GPSRO) soundings obtained by a constellation of small satellites operated by SPIRE Inc.

Other parts of the observing system

Beyond ABOS, other observing systems were impacted, albeit to a much smaller extent at least at the global level. Many NMHSs around the globe have had to implement shut-downs or work from home policies. Especially in the developing world, where a significant number of observing stations still rely on human intervention for reading instruments and/or for encoding and transmitting observational data, an impact could be seen (see Figure 3).

The marine observing systems have also been impacted by the crisis (see Figure 4), especially as concerns observations made by ships participating in the WMO Voluntary Observing Ship (VOS) Programme. These now seem to have stabilized at around 80% of pre-COVID levels. Shipping traffic has generally suffered less than air traffic during the crisis but the indirect impact due to COVID-19 related restrictions has nevertheless been felt. It has been difficult for Port Meteorological Officers to visit ships to repair or calibrate measurement equipment, and this is believed to be among the primary reasons for the decrease in the number of observations.

Most other marine observing systems – such as drifters, moored buoys and ARGO floats – are highly automated and autonomous and thus less susceptible to short-term COVID-19 impacts. Drifters and floats will need to be replaced over time, and moorings will need to be regularly maintained, so over a longer period of time the impact could well become substantial. Most drifters and floats are manufactured by relatively small companies, some of which may not survive an extended period without customer orders. Lost opportunities to visit moorings may result in losing the mooring altogether and, since lost ship time is a resource that cannot be easily recovered once the crisis is past, it may take years to recover any backlog that might develop as a result of an extended crisis.

Generally speaking, automated and autonomous systems have performed better during this crisis than systems relying on direct, routine human actions. Satellite systems would thus be expected to have very good initial resilience to crises of the type generated by COVID-19. Satellite systems are fully automated and autonomous, they typically have operational lifetimes of several years, and the operational systems that form the backbone of the space-based component of WIGOS are typically designed with some form of operational back-up capability in orbit. As long as program development and implementation efforts on the ground can continue rapidly enough for the system to be replenished as needed, the space-based component of the system should be able to continue to deliver its observations in spite of COVID-19. And in fact, the flow of satellite observations, which currently dominate the mix of observations both by data volume and by contribution to skill, has continued largely unaffected by the current crisis.

In terms of the effect on end-user applications of the reduced observational capabilities, the best tools for assessing this are provided by the global NWP systems operated by a number of WMO Members under the auspices of the GDPFS. All such systems include methodologies for attributing forecast skills to specific observation types and/or locations. However, one complicating factor is that the ranking of the importance of each observation type in terms of its impact on NWP skill may differ between NWP forecasting systems.

The European Centre for Medium-Range Weather Forecasts (ECMWF), a WMC, reports that aircraft-based observations (ABO) are second only to satellite data in terms of their impacts on forecasts. They represent 13% of the impact of all observations used at ECMWF averaged over 2019. For the Met Office in the United Kingdom and for the Fleet Numerical Meteorology and Oceanography Center (FNMOC) of the US Navy, the impacts on their respective global models represent 8% and 9% for the same period (2019). This provides a reasonable basis for expecting that a significant lack of ABO would adversely affect forecast performance. The decrease in the number of ABO during the pandemic is very clearly evident from time series plots, such as the one shown in Figure 1, but due to day to day variability in atmospheric conditions and in forecast quality, it is not nearly as simple to demonstrate unequivocally the impact of this decrease on forecast performance. Forecast performance varies from one day to another due to factors beyond just the number and quality of observations that are available, primarily the prevailing types and spatial scales of weather phenomena on a given day.

However, in a background, controlled data denial experiment carried out for a time period prior to the Covid-19 pandemic, the impact can be assessed quantitatively, and this may help yield some insight. ECMWF thus executed an ABO data denial experiment in 2019 by running a series of forecasts, using all available observations except ABO. The forecast quality was compared to the quality of forecasts made using all available data. The result showed that wind and temperature forecasts for the northern hemisphere are the main quantities negatively affected by the loss of ABO. The decrease in skill was found to be most significant during the first 24 hours of forecast range, and it persisted up to a range of 7 days. This altitude level is significant since it also happens to be near the maximum intensity of the polar jet stream, which plays an essential role in the steering of major weather systems. More detailed results can be found here.

Scientists from several WMCs (Bureau of Meteorology of Australia (BoM), ECMWF, National Centres for Environmental Prediction (NCEP) and the Met Office) are currently working on assessing and analyzing the impact of the reduction in different types of observations during the pandemic period. The initial hypothesis is that there may indeed be an impact, and anecdotal evidence of some impact on short-range forecast quality has been reported. However, the factors listed in the previous paragraph are making it difficult to detect an unambiguous signal. At the recent Session of its Technical Advisory Committee in October, ECMWF reported that it had seen “no clear degradation in forecast performance despite the loss of observations due to COVID-19.” Additional information will be released as it becomes available.

In summary, the COVID-19 crisis has clearly had an impact on the availability of observational data, and this impact has been very significant for some components, less so for others. While the overall effect of this on end-user products is still under investigation, some lessons can already be drawn out.

Lesson number one is that automated systems tend to be highly resilient to this type of crisis. Lesson two is that a given level of forecast skill can be attained via different mixes of observations. It has been gratifying to see various entities from both the public and private sector step in to offer additional observations to the modelling community in order to mitigate the effect of the loss of data caused by the crisis. And the most important lesson: the crisis has provided a reminder of the danger of over-reliance on observations of opportunity, such as aircraft-based observations. While these data are unquestionably highly valuable for NWP, the COVID crisis has shown that their availability is determined entirely by commercial and operational constraints of the airlines that provide them, factors that are entirely beyond the control of WMO and the NMHSs of its Members.

As the use of observations of opportunity continues to grow, it will be crucial to maintain a certain level of investment in core observations that are made for the sole and specific purpose of underpinning the weather, climate, water and environmental services provided by all Members under WMO auspices. If nothing else, the crisis has clearly demonstrated the immense value of operational robustness, a quality that is inherent in an observing system consisting of many and diverse components operated by a broad group of entities from different sectors and different nations.