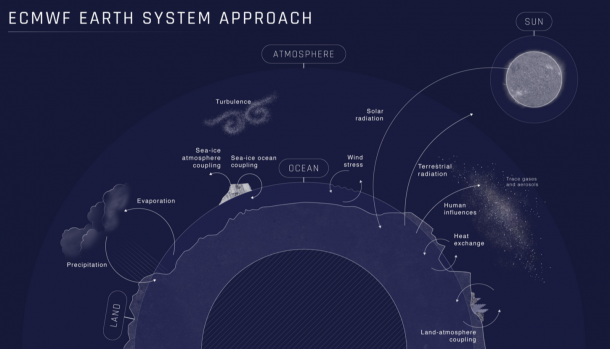 Climate change, population growth and human intervention within river channels and catchments make it more challenging than ever to provide reliable information on the current and future state of water in the world's rivers. Yet society urgently needs timely, dependable information for early warning of floods and droughts, which still today surprise and devastate entire communities. Scientific progress must accelerate to meet this challenge. This article argues that an Earth system approach to global hydrological prediction will spark the innovation and stronger interdisciplinary collaboration needed for breakthrough scientific progress.

Hydrological prediction has a rich past. Its basic principles were already well-established over 50 years ago (Nash and Sutcliffe, 1970). But since then, despite significant investment, progress has been slow and vast scientific, data and operational limitations remain.

The lack of river discharge observations around the world is a major obstacle for hydrological prediction systems (Lavers et al., 2019). But traditional prediction approaches also have limited capability to exploit the range of available, and planned, Earth system observations – for snow, soil moisture, evapotranspiration, groundwater and river discharge – especially with the proliferation of remote sensing. In addition, traditional models struggle to extrapolate predictions of extremes outside the ranges to which they were tuned. This problem is exacerbated as catchments, and their river flow, change over time in response to land-use and climate changes. Given the complexity and scale of the problem, it is pertinent to ask whether an alternative and more interdisciplinary approach would accelerate scientific progress.

The advantages of the Earth system approach

The Earth system approach, the basis of the European Centre for Medium-Range Weather Forecasts (ECMWF) Strategy 2016–2025 and the WMO governance reform which is now in implementation, models the Earth as a whole. This includes interactions between the atmosphere, oceans and land as well as the biosphere and human activities. Such an approach is inherently interdisciplinary, spanning many fields of science and demanding closer collaboration.

The advantages of exploiting Earth system modelling for the task of global-scale hydrological prediction are many. Allowing for interactions between all components of the Earth system leads to improved and consistent predictions between all variables. For example, a correct water budget1 would not only provide the optimum land surface conditions to drive surface weather, it would also provide the best freshwater influx to the ocean, which in turn would improve the atmospheric predictions which would positively impact the hydrology. This physical and technical consistency provides the basis for seamless prediction from short-to-seasonal lead times without any need for separate flood and drought systems, as is currently the case (e.g. Global Flood Awareness System (GloFAS; Alfieri et al., 2013) and GloFAS-Seasonal (Emerton et al., 2018)).

Large-scale hydrological prediction services must be sustainable in terms of scientific, technical, and computational expertise and resources. Operational numerical weather prediction (NWP) centres have already embraced the Earth system approach. Therefore, performing hydrological prediction at NWP centres allows unparalleled access to resources and expertise. These include advances in Earth system observations and data assimilation, high performance computing and cloud infrastructure, delivery of 24/7 operational predictions, and collaboration on new developments in areas such as artificial intelligence and machine learning at scale. Together, these foster collaboration and innovation and provide significant cost saving.

At ECMWF the comprehensive Earth system model, known as the Integrated Forecasting System (IFS), forms the basis for all the data assimilation and forecasting activities. Progress in the modelling of interactions between Earth system components is at the core of the ECMWF 2016–2025 Strategy (Figure 1).

The ECMWF vision is to use the Earth system approach to take global hydrological prediction to the next level. Closing the water budget in operational models remains a major scientific challenge (Zsoter et al., 2019). As stated earlier, improving the representation of hydrology would benefit the prediction of other interconnected atmospheric and oceanic components. But it will not be an easy task. It will require close collaboration between scientists from many fields. Many scientific questions remain open, and there are just as many barriers when it comes to the availability of hydrological data. However, the use of Earth system modelling for flood forecasting is a clear proof of concept. The Global Flood Awareness System (GloFAS), for which ECMWF is the computational centre, is the fully operational 24/7 forecasting component of the European Commission’s Copernicus Emergency Management Service (CEMS). GloFAS provides information to support early warning of floods around the world. Figure 2, for example, presents the GloFAS flood forecasts used in Mozambique in March 2019 during the destructive tropical cyclone Idai.

Challenges for the Earth system approach in hydrology

The spatial resolution of Earth system models is currently rather coarse for hydrological prediction in small catchments. For example, GloFAS, with its horizontal gridded resolution of approximately 10 km, is recommended for use in medium and large catchments with areas larger than 1000 km2. In comparison, where in situ observations are available, traditional models can be set up in much smaller catchments. A “hyperresolution” target in the order 1 km globally is required for Earth system based hydrological prediction to be useful at local scales (Wood et al., 2011).

It much more straightforward to reduce water budget errors in traditional hydrological models because they only seek to predict river discharge correctly. The closing of the water budget within Earth system models must be done in a way that does not worsen predictions of other components that are essential for weather and climate prediction.

The tracking of progress made by any new hydrological prediction developments, as well the ground-truthing (measuring) of new river discharge remote sensing capabilities, is dependent on access to real-time and historical hydrological observations in a standardized data framework. Initiatives such as the  WMO Hydrological Observing System (WHOS), which would make such data available, are crucial for advancement of global hydrological perdition (Lavers et al., 2019).

Making the vision a reality

The substantial progress in hydrological prediction made within the field of hydrology with traditional models cannot be ignored. It is essential that such progress continues. However, the Earth system approach is more effective for global scale prediction as it provides a clear framework and vision for closer interdisciplinary collaboration, advanced data assimilation and Earth system observation capabilities, access to high performance computing, and offers service sustainability. As we face the pressures of climate change and a growing population, it is our ambition and responsibility as a community at the service of society to be prepared and to provide prediction systems capable of meeting global challenges. The Earth system approach promises to deliver this.

With the right leadership, resources and a group of interdisciplinary scientists willing to step outside their comfort zones and embrace a different way of doing things, pushing the boundaries of hydrological prediction towards an Earth system approach is achievable. Progress has already begun, as demonstrated by GloFAS. With even more powerful supercomputers allowing ground-breaking kilometre-scale global Earth system models to be tested (ECMWF, 2020), the vision of fully coupled hydrological prediction within Earth system models is reachable within the next decade.

1 The water budget is the relationship between the inflow and outflow of water.