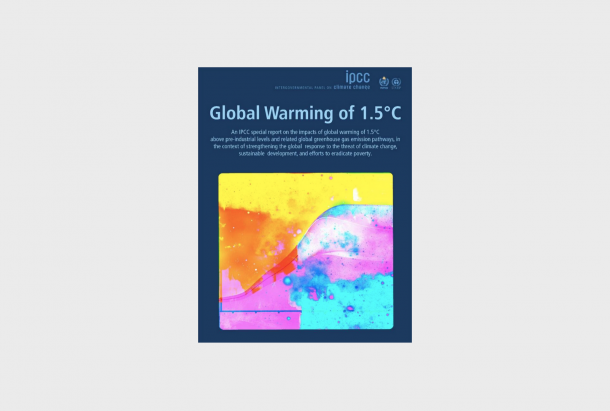 Every bit of warming matters.

It has been described as the most important report ever published in the 30-year history of the Intergovernmental Panel on Climate Change (IPCC) and an “ear-splitting wake-up call to the world.”

The new report on Global Warming of 1.5 °C made headline news around the world with its stark message that limiting warming to 1.5 °C would require unprecedented transitions in all aspects of society. The report stresses the huge benefits to human welfare, ecosystems and sustainable economic development in keeping warming to 1.5 °C compared to 2 °C, or higher.

The 33-page Summary for Policymakers and the underlying report was approved by IPCC member governments in Incheon, Republic of Korea, on 6 October. Ninety-one authors and review editors from 40 countries collaborated on the report, which cited more than 6 000 scientific references. It was produced jointly by all three IPCC Working Groups, on the physical science basis of climate change; on impacts, adaptation and vulnerability; and on mitigation of climate change.

WMO is one of the co-sponsors of the Nobel-prize winning IPCC, which was asked to prepare the report when governments adopted the Paris Agreement to combat climate change. The Paris Agreement sets a long-term goal of holding the increase in the global average temperature to well below 2 °C above pre-industrial levels and pursuing efforts to limit the temperature increase to 1.5 °C.

The report underlines that we are already seeing the consequences of 1 °C of global warming through more extreme weather, rising sea levels and diminishing Arctic sea ice, among other changes.

“This report by the world’s leading climate scientists is an ear-splitting wake-up call to the world. It confirms that climate change is running faster than we are – and we are running out of time,” declared UN Secretary-General António Guterres.

The report highlights a number of impacts which could be limited by lower temperature increases.

Sea level rise: Sea level will continue to rise well beyond 2100, when it is projected to be 26 to 77 cm higher than the 1986–2005 baseline under a 1.5 °C temperature increase, about 10 cm lower than for a global warming of 2 °C. This would mean that up to 10 million fewer people would be exposed to related impacts such as saltwater intrusion, flooding and damage to infrastructure in low-lying coastal areas and small islands. Exceeding 1.5 °C risks triggering instabilities in the Greenland and Antarctic ice sheets, which could result in multi-metre rise in sea level over hundreds to thousands of years. 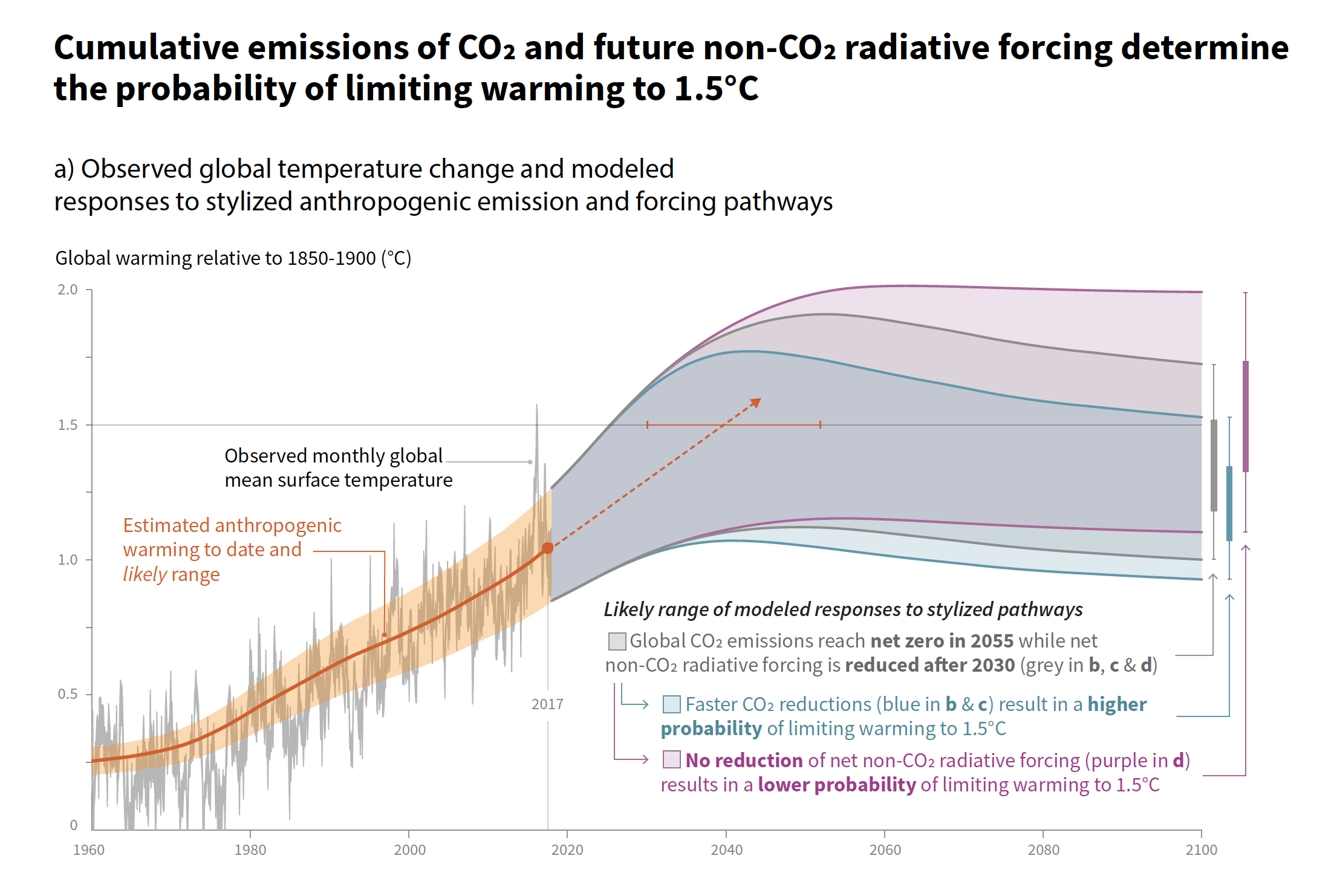 Sea ice: The likelihood of an Arctic Ocean free of sea ice in summer would be once per century with global warming of 1.5 °C, compared with at least once per decade with 2 °C.

Ocean health: Limiting global warming would slow the increases in ocean temperature and acidity and decreases in ocean oxygen levels and so would reduce risks to marine biodiversity, fisheries, and ecosystems. But with 1.5 °C, coral reefs are expected to decline by 70–90%, whereas more than 99% would be lost with 2 °C.

Extreme events:  Climate models predict increases in mean temperature in most land and ocean regions, hot extremes (increased number of days with temperature up to 3 °C higher) in most inhabited regions, increased frequency, intensity and/or amount of heavy precipitation in several regions, and increased intensity and frequency of droughts and precipitation deficits in some regions. There are big regional differences, with a particularly high risk for the Mediterranean, sub-Saharan Africa and Small Island States.

Human welfare: Climate-related risks to health, livelihoods, food security, water supply, human security, and economic growth are projected to increase with global warming of 1.5 °C and increase further with 2 °C. Limiting warming to 1.5 °C rather than 2 °C could result in 420 million fewer people being exposed to severe heatwaves.

Water: Depending on future socioeconomic conditions, limiting global warming to 1.5 °C, compared to 2 °C, might reduce the proportion of the world population exposed to a climate change induced increase in water scarcity by up to 50%. 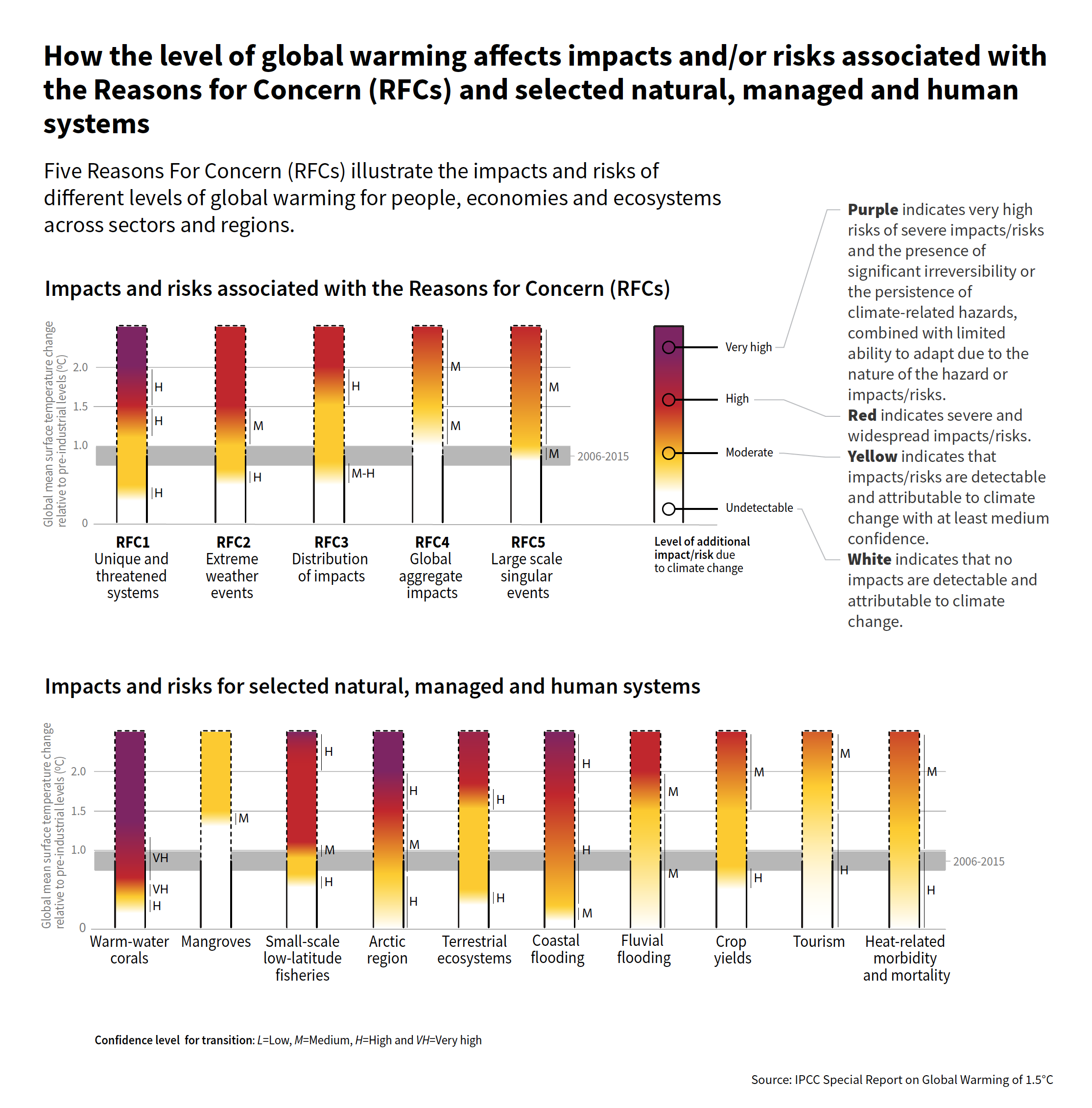 Pathways limiting global warming to 1.5 °C with no or limited overshoot in temperature above that level would require rapid and far-reaching transitions in every sector of society and the economy. These systems transitions are unprecedented in terms of scale, according to the report.

By 2050, renewable energy would have to supply half to two-thirds of primary energy, with coal dropping to 1–7%. The shift to cleaner energy would need to be matched by progress in other sectors including better land management and sustainable agriculture, transport and diets.

CO2 emissions from industry would need to be about 75–90% lower in 2050 relative to 2010, as compared to 50–80% for global warming of 2 °C. Such reductions can be achieved through combinations of new and existing technologies and practices, including electrification, hydrogen, sustainable bio-based feedstocks, product substitution, and carbon capture, utilization and storage.

Existing and potential CO2 removal measures include afforestation and reforestation, land restoration and soil carbon sequestration, direct air carbon capture and storage.  Most of these could have significant impacts on land, energy, water, or nutrients if deployed at large scale. Afforestation and bioenergy may compete with other land uses and may have significant impacts on agricultural and food systems, biodiversity and other ecosystem functions and services. Effective governance is needed to limit such trade-offs and ensure permanence of carbon removal in terrestrial, geological and ocean reservoirs.

The effectiveness of new techniques such as solar radiation modification is unproven at large scale and some may carry significant risks for sustainable development, the report notes.

The full title of the report is “Global Warming of 1.5 °C: an IPCC special report on the impacts of global warming of 1.5 °C above pre-industrial levels and related global greenhouse gas emission pathways, in the context of strengthening the global response to the threat of climate change, sustainable development, and efforts to eradicate poverty.”

The title reflects the importance of a coordinated, holistic support for the 2030 agenda on sustainable development, disaster risk reduction and climate change.

A mix of adaptation and mitigation options implemented in a integrated manner can enable rapid, systemic transitions in urban and rural areas. There are multiple synergies and benefits for sustainable development (particularly for SDG 3  - health, 7 - clean energy, 11 - cities, 12 - responsible consumption and production, 14 - oceans), although trade-offs are possible.

The report will be a key scientific input into the Katowice Climate Change Conference in Poland in December, when governments review the Paris Agreement to tackle climate change, in a process known as the Talanoa Dialogue.

One of the underlying conclusions is that limiting global warming to 1.5 °C compared with 2 °C would reduce challenging impacts on ecosystems, human health and well-being, making it easier to achieve the UN Sustainable Development Goals and reduce poverty.

“Climate change adaptation is no longer an option, it is a necessity. This report makes it clear that the longer we delay, the more difficult and costly it will be,” said WMO Secretary-General Petteri Taalas.

WMO is intensifying efforts to further strengthen early warning systems to protect lives in the face of more extreme events. Improved climate services are helping to increase resilience in our food and health systems, urban and coastal planning, energy and infrastructure and water management, he said.

Global Warming of 1.5 °C is the first in a series of Special Reports to be produced in the IPCC's Sixth Assessment Cycle. Next year the IPCC will release the Special Report on the Ocean and Cryosphere in a Changing Climate, and Climate Change and Land.

WMO will continue to provide support to the IPCC throughout the Sixth Assessment Cycle and is intensifying its scientific support for climate change mitigation and adaptation through a new strategy entailing fully integrated, “seamless” Earth-system approach to weather, climate and water domains.

Over the last two decades, climate science has made unprecedented progress in better understanding of the functioning of the climate system and in assessing consequences of human interference. Now, more than ever before, we need science to support adaptation to climate extremes and climate change, and to help to guide transformations needed for sustainable development of the planet.