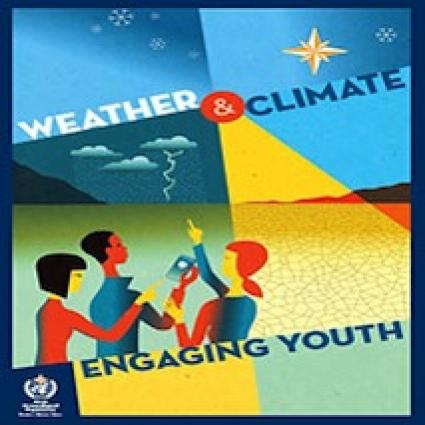 During 2014, WMO will reach out to young people and seek to engage them in weather and climate issues. In January, the Organization launched a new web-based Youth Corner. In February, it issued a new edition of Careers in Meteorology aimed at young people who are deciding what to study or what kind of work to pursue. In March, over 100 students were invited to WMO headquarters in Geneva to celebrate World Meteorology Day with the theme “Weather and Climate: Engaging Youth.”

While weather and climate issues affect the lives of young people today, they will have increasingly dramatic impacts in the future. What are some of the biggest environmental concerns that future generations will face? The health of the oceans, the impacts of desertification and the growth of megacities are three important issues that will have to be addressed. “Hot, Sour and Breathless – Oceans Under Stress,” “The Future of the Aral Sea lies in Transboundary Co–operation” and “Towards Integrated Urban Weather, Environment and Climate Services” provide some insight into those issues.

Then follows a series of contributions from young people. “Junior Professional Officers” at WMO feel an urgent need to address the threats and opportunities of climate change. They share their passion with readers and urge others to consider careers in sciences. Along that career path can come some rare perks as shown in “Meteo-Volunteers for Sochi Olympic Games 2014.” For those taking a different path, there are other avenues for them to act on climate issues. Landry Ndriko Mayigane provides examples in “How African Youth are Participating in Global Climate Change Politics.” The final article in the series is by a student from the Ferney-Voltaire International School, reporting on the WMO-supported “Model United Nations” event on climate change, which took place in January.

WMO Members and others in the meteorology community “engage” youth as part of their mandates. Space only permits us to present a few of our community’s efforts, including those of the LaMMA Consortium in Italy, the Met Office and the Royal Meteorological Society in the United Kingdom of Great Britain and Northern Ireland (UK), the American Meteorological Society (AMS), the Agency for Meteorology, Climatology and Geophysics of the Republic of Indonesia (BMKG), and the Caribbean Institute for Meteorology and Hydrology in Barbados. WMO Members all over the world are implementing similar initiatives, and readers are encouraged to contact their national meteorological and hydrological services for more information. The WMO website contains links to the websites of the national meteorological and hydrometeorological services of its Members where more information can be obtained on local activities and young people can see how they can get involved.

The new WMO Youth Corner also contains direct links to youth websites and materials created by Members. The two final articles focus on efforts by WMO and its partners to fill the gaps in observation systems in the polar regions to respond to growing scientific understanding of the critical role these regions play in the global weather and climate system.