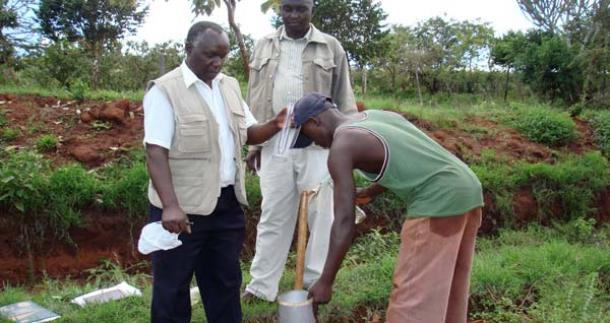 Some 842 million people worldwide cannot afford to eat adequately and are chronically hungry. The links between food insecurity and poverty are clear. Factoring weather and climate information into agricultural decision-making has optimized agricultural production in many countries. However, in developing countries – where most smallholder farms are rain-fed – access to weather and climate information to guide decision-making is limited. Governments should view such information, crucial to farmers, as a means of alleviating poverty and hunger.

The situation persists because National Meteorological and Hydrological Services in developing countries, including the Kenya Meteorological Department, do not receive sufficient funding to cover the cost of providing such services.  This could be due to a lack of government awareness of the contribution of meteorological services to national socio-economic development. This lack of awareness exists even though governments face major challenges and constraints in agriculture, water resources management, health and disaster risk reduction, among others, all of which are heavily influenced by weather and climate.

Despite occurrences of drought with attendant crop failure and occasional famine, flooding with the attendant loss of human life and destruction of property and the impacts of other phenomena on socio-economic development, there has been very limited research done to quantify the benefit of weather and climate information and services. The Kenya Meteorological Department took a step to fill this research gap by conducting a pilot project between 2008 and 2009 to investigate the socio-economic benefits of using weather and climate information and services in agriculture, specifically maize production.

Agriculture is key to the development of Kenya, contributing directly and indirectly to over 50% of the Gross Domestic Product (GDP). A significant fraction of government revenue is allocated to achieving food security in the country, thus, agriculture is given special emphasis in national development policies and strategies, including the Poverty Reduction Strategy Paper and Kenya Vision 2030.

The pilot project included workshops to brainstorm on implementation; involvement of stakeholders in the implementation and discussion of the results of the study; a baseline survey; training for farmers; and monitoring and evaluation of the project activities on the demonstration plots (experimental and control plots). Data-capture tools were developed in a multi-disciplinary and participatory process, and they were pre-tested to ensure good quality. The site selection criteria was based on:

The two demonstration farms chosen for the pilot project were in Nakuru, a sub-humid agro-climatic zone, and Machakos, a semi-humid to semi-arid zone. Each farm had a control and experimental plot of one acre. In the control plots, the farmers continued their normal practice, devoid of weather information, whereas meteorological information and services from the Kenya Meteorological Department were included in decision-making processes in the experimental plots. The farmers received updated weekly, monthly and seasonal weather and climate forecasts.

Workshops and site visits by the Project Research Team improved the farmers’ ability to interpret and use weather information for maize crop production. The farmers were instructed to keep records of times of planting, weeding, plant stages of reproduction and yields. Various forms and registers for capturing information were availed to them.

Results of the baseline survey

The baseline survey was conducted in three regions of Kenya: Kakamega, Nakuru and Machakos where the source of household income is crop farming (62%). The majority of the 397 respondents (61.1%) indicated that they were willing to spend money on weather information, including on value-added products.

Some 51% indicated that they used seasonal weather forecasts, while 32% used daily forecasts. This suggests that easy access and timely provision of accurate weather and climate forecasts is an essential service for 83%, hence the need for awareness creation to attract more government funding for such services.

Results of the pilot

The pilot quantified the socio-economic benefits of the meteorological information and services provided to the maize producers using a Cost-Benefit Ratio (CBR) technique.

The analysis indicated that the project posted an overall profit of 39% in Machakos county and 110% in Nakuru county.

At the plot level, the Cost-Benefit Ratio values, representing the benefit of using weather information and services, were 1.64 for Machakos and 2.38 for Nakuru. This, in effect, indicates that for every shilling (Sh) invested, a return on investment of between Sh. 1.6 and 2.4 could be realized in maize farming in the study areas, implying that the use of weather information was beneficial to the project farmers. Studies in other countries have shown that the cost-benefit ratio of a national meteorological service is around 1:4 to 1:6.

These results clearly indicate that there are socio-economic benefits derived from using meteorological information and services in the agricultural sector in Kenya.

Since the end of the project in 2009, several benefits have been realized. The agriculture sector continues to be fully involved in post-project activities. One of the major impacts of the project is the continuous interactions and involvement of this sector with the National Meteorological Service. This is contributing to the growing confidence in the use of meteorological information for planning and operations within the agriculture sector in Kenya.

The farmers that were involved in the project have become user-community weather-information champions in their local areas. Through their informal networks, they are influencing other farmers to regularly use meteorological information and services in their decision-making.

Over the last five years, the project team has been sharing its experiences and project results in conferences and assisting with the implementation of similar projects in other countries. The project has enhanced operational research knowledge and benefit quantification skills at Kenya Meteorological Department.

As a result of the project, a sustainable network of collaborating stakeholder institutions, experts and users was established to promote and sustain the beneficial use of weather information in Kenya.

The project findings indicate that weather and climate services have the potential to significantly enhance agricultural production, improve food security and contribute further to the GDP of developing countries. This is in line with the aspirations of the Global Framework for Climate Services (GFCS). But more research on the quantitative nature of the weather forecasting processes is necessary. Further investigation would confirm the socio-economic benefits of providing weather and climate products and services in the structured decision-making of farmers. Climate-smart technologies to enhance operational climate risk management in agriculture and other economic sectors need to be adopted and the GFCS offers the opportunity to do just that. 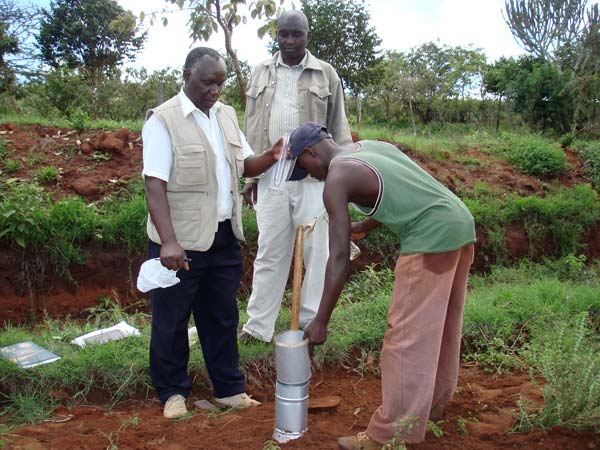 Rain gauges and measuring jars were installed in the demonstration plots 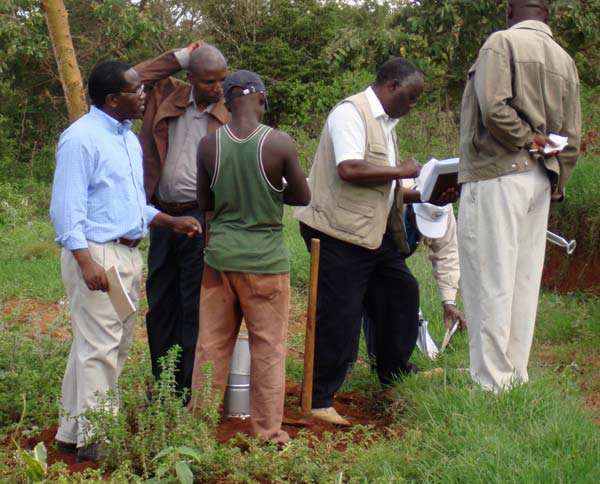 Training on how to complete a rainfall register

2015 marks the target date for achieving the Millennium Development Goals and a post-2015 sustainable development agenda is expected to be adopted by United Nations Member States at the Special Summit on Sustainable Development in September. It is envisaged that the post-2015 agenda will tackle many issues, including ending poverty and hunger, improving health and education, making cities more sustainable, combating climate change, and protecting oceans and forests. Improved quantification and understanding of the socio-economic value of meteorological products and services will contribute to enhanced use of such products and services to better address all the post-2015 agenda issues, particularly food security.

The pilot project was sponsored by WMO through the Finnish Trust Fund and the Kenya Government. It was steered by the Kenya Meteorological Department (KMD) in collaboration with the Department of Meteorology - University of Nairobi, Ministry of Agriculture, Ministry of National Planning, Kenya Agricultural Research Institute (KARI), IGAD Climate Prediction and Applications Centre (ICPAC), Ministry of Environment and Mineral Resources, among others. All these institutions are acknowledged for the roles they played in making the project a success and for their continued support and collaboration with KMD in operational research. All the individuals, especially members of the Project Steering Committee (PSC), the Project Research Team (PRT) and Report Writing Team are appreciated for dedicating their time and efforts to the success of this project. Special thanks go to all the research Assistants, Project farmers as well as members of the public who assisted the research teams in one way or the other. All the members of KMD who may not have been directly involved in the project but facilitated the project teams in whatever capacity are highly appreciated.

Special thanks go to Dr. Joseph Mukabana, MBS the immediate former Director, KMD and Mr. James Kongoti the Director, KMD. Last but not least, WMO is acknowledged for facilitating the funding without which this project would not have been a reality.