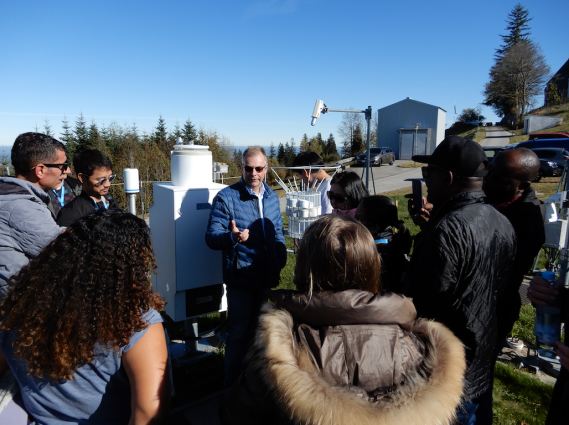 The Earth’s atmosphere's main cleansing mechanism removes chemicals from the air and deposits them onto land and water surfaces. While the effects of these removal processes are mostly beneficial, some can have negative impacts on human health, ecosystems and food security. For example, acid rain – the acidification of rainwater due to nitrogen and sulfur emissions – damages forests, kills insects, corrodes industrial metal structures, etc. Such adverse impacts of deposition are of great interest to society as a whole and more particularly to policymakers, thus, WMO decided to undertake the Measurement-Model Fusion for Global Total Atmospheric Deposition Initiative.

With changes in emissions of atmospheric pollutants, atmospheric deposition has changed dramatically over the past decades. Without a proper understanding and assessment of the amount of atmospheric pollutants deposited onto land and water surfaces, atmospheric deposition could have even more detrimental unknown effects on the well-being of society and ecosystems and the functioning of the atmosphere-land-ocean system. In view of this, many global and national scientific, ecosystem, human health and food security stakeholders have a keen interest in better understanding atmospheric deposition at all spatial scales in order to better assess its deleterious effects and devise the necessary mitigation measures. The Measurement-Model Fusion Initiative proposed by the WMO Global Atmosphere Watch (GAW) will overcome the limitations and maximize the benefit of existing approaches to mapping deposition on a global scale.

The Earth’s atmosphere, composed primarily of nitrogen and oxygen, is a complex medium. Besides these two main constituents, it is the carrier of a diverse range of additional trace gases and particles, some emitted by natural sources, others emitted by human activities, and still others created by chemistry within the atmosphere. Many of these trace species are considered “pollutants” due to their negative impacts on human health or on the natural or built environment. Pollutants are removed from the atmosphere and deposited onto the Earth’s terrestrial and aquatic surfaces through a process known as atmospheric deposition. Atmospheric pollutants can be removed by either wet deposition – precipitation – or dry deposition. Dry deposition can include gravitational settling of particles, or diffusion and turbulent transfer to the surface and subsequent uptake by plants or adsorption to surfaces.

Atmospheric deposition is the primary removal process for most reactive chemical compounds in the atmosphere. In many regions, it is the primary mechanism for pollutants to enter an ecosystem, representing a key process in the Earth system.

The rates at which atmospheric pollutants are deposited onto the Earth’s land and water surfaces are determined by meteorological factors such as temperature, precipitation, humidity and wind, the deposited gas or particle’s properties (both physical and chemical), and the characteristics of the surfaces onto which these compounds are deposited. The combination of all of these factors determines how long a given atmospheric pollutant will remain in the atmosphere, how far away from its source it will be transported by the wind and how much of it will be removed from the atmosphere.

Relevance to the Sustainable Development Goals

Ozone deposition to vegetation, for example, seriously affects the sustainable provision of food, feed and fibres worldwide (SDG 2 - Zero Hunger). In addition to its direct contribution to radiative forcing, ozone can also affect radiative forcing indirectly through damage to vegetation, which reduces plant productivity, thereby leading to decreased carbon dioxide uptake resulting in more carbon dioxide in the atmosphere (SDG 13 – Climate Action) (IPCC, 2013; WMO, 2018). Ozone damage has been estimated to cause worldwide economic losses in the range of US$ 10–20 billion due to its deleterious effects on staple food crops such as wheat, soybean and maize (Avnery et al., 2011). The estimated annual yield loss due to ozone (ozone yield gaps, mean of 2010–2012) is by 12.4%, 7.1%, 4.4% and 6.1% for soybean, wheat, rice and maize, respectively, adding up to 227 Tg of lost yield (Mills et al., 2018). An example of ozone-induced plant damage and how it gets worse over time is shown in Figure 1. The older leaves on a plant will show more damage than the younger ones as the former will have been exposed to ozone for a longer period.

Similarly, atmospheric deposition of reactive nitrogen has a direct effect on ecosystem health, agricultural production on both managed and unmanaged lands, and climate change. High levels of nitrogen deposition have been shown to cause soil and surface water acidification, water quality degradation and eutrophication and to affect vegetation growth and plant and animal species diversity. Cumulative nitrogen deposition can lead to nitrogen saturation of soils, which in turn can lead to biodiversity loss, soil acidification, water degradation and forest growth reduction. Thus, understanding and mapping atmospheric deposition on a global scale is extremely important, particularly since atmospheric deposition is linked to 7 of the 17 United Nations’ SDGs.

Measurements of atmospheric deposition and the Measurement-Model Fusion technique

Wet deposition of atmospheric pollutants is measured by collecting precipitation samples and measuring the concentrations of the targeted pollutants and the depth of the precipitation (Figure 2). Dry deposition is commonly estimated by measuring the concentrations of gases and particles near the Earth’s surface and using computer models to calculate their associated dry deposition velocities, that is, the speed at which these pollutants are deposited to the Earth’s surface.  Both methods require expensive and sophisticated measurement networks that operate over large areas, such as those coordinated by GAW. Wet and dry deposition are also estimated by chemical transport models (CTMs), which combine emission inventories with meteorological and atmospheric process models over regional and/or global scales. Both the measurement and modelling approaches have specific advantages and disadvantages but neither is perfect.

Current maps of atmospheric deposition on a global scale are based on a limited set of measurements or the predictions of CTMs. Both types of maps contain large uncertainties: Deposition measurements are sparse or non-existent in large areas of the world, that is, Africa, Asia, Australia and South America and over the oceans, and chemical transport models are necessarily reliant on assumptions and simplifications in their emission budgets and parametrizations.

In order to overcome the limitations and maximize the benefit of both approaches, a new method of creating deposition maps, called Measurement-Model Fusion (MMF), has been developed. MMF merges best-available measurements of both wet and dry deposition, including atmospheric concentrations, with best-available CTM estimates of deposition using statistical methods. The technique “nudges” or adjusts model estimates closer to true values by incorporating or “assimilating” measurement values, much in the same way that observations of meteorological variables, such as temperature, wind speed, wind direction and relative humidity, are assimilated into numerical weather prediction (NWP) models in order to improve the accuracy of weather forecasts. Unlike NWP, however, atmospheric deposition measurements cannot be incorporated into deposition models in real or near-real time as deposition-related measurements need to be processed and analysed post-collection. Instead, observations are assimilated at a later stage or retroactively.

The result of this process are maps of atmospheric deposition that provide more accurate estimates of both wet and dry deposition than could be achieved with either observation or model estimates alone.

MMF methods have been developed and applied successfully in several countries including Canada, Sweden and the United States but have yet to be applied on a global scale. Figures 3 (a-b) and Figure 4 show examples of high-resolution MMF deposition maps produced by Canada, the United States and Sweden, respectively. These methods provide the scientific and methodological basis for expanding deposition maps from national and regional scales to global scales.

Currently, many countries lack the capability and knowledge to account for atmospheric deposition in their scientific, policy-making and planning decisions related to the United Nations SDGs.  MMF maps of deposition on a global scale, formulated from best-estimates of measurements and models, will serve to inform and support this decision-making processes.

Global high-quality deposition and concentration maps, and their associated data files, will allow government agencies and other stakeholders to assess the impacts of atmospheric deposition of chemicals on population health, land and ocean ecosystems, agricultural land surfaces and climate change.  Their decision and actions would be based on the best-available scientific data. GAW already plays a central role in the data collection and quality control of surface measurements of deposition.  In the framework of  the MMF-GTAD , it will also play a key role in advancing the operational production of MMF maps of atmospheric deposition on a global scale (and, additionally, on regional scales in areas of the world with poor measurement coverage) and in providing authoritative results and knowledge to the UN and its member states.  This is reflected in the following Vision Statement for the MMF-GTAD Initiative:

Stakeholders will be able to access high-resolution, high-quality, global-scale maps of total atmospheric deposition to meet societal needs as they relate to the environment and global sustainable development.

Implementation of the MMF-GTAD Initiative

The MMF-GTAD Initiative will implement a comprehensive operating system that incorporates the gathering of measurement data and modelling output, the application of MMF techniques, and the development and delivery of products and services. The Initiative will require a highly integrated and coordinated approach to activities that span several different atmospheric science fields. The list includes atmospheric composition and deposition measurements (such as GAW stations, regional and national measurement networks), chemical transport modelling (regional, national and global scales), emission inventories, data assimilation/measurement-model fusion, database management and product dissemination and delivery.

To meet the objectives of the MMF-GTAD Initiative, all services and products provided by the Initiative will be driven by user needs.  This will be achieved through consultation and feedback in meetings and workshops aimed at defining their specific needs.

The MMF-GTAD Initiative was launched in February 2019 by an Expert Meeting with members from the fields of observations and modelling of atmospheric deposition, aerosols and reactive gases, MMF techniques to food security and ecosystems – at WMO Headquarters in Geneva. The meeting defined the technical and financial aspects related to the implementation of the initiative and work was started on its implementation plan.

Many of the technical and scientific elements are currently in place. The Initiative is now seeking funds to move forward with the production of global deposition maps. GAW welcomes both in-kind and financial contributions from WMO Members and partners to the MMF-GTAD Initiative. Several scientific, societal and policy-based organizations are awaiting the routine production of global MMF-GTAD maps under this initiative.