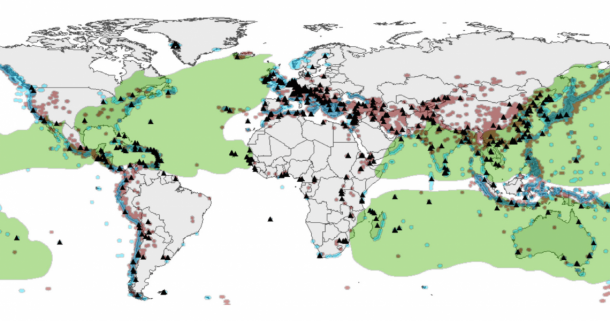 “Neither snow nor rain nor heat nor gloom of night stays these couriers from the swift completion of their appointed rounds.” This phrase, engraved on the side of the James A. Farley Post Office Building in New York City, has become the unofficial motto for the reliability of postal services. Yet, by virtue of their extensive networks and reliance on critical infrastructure, postal services can be profoundly affected by disasters, especially those related to natural meteorological hazards and extremes.

Postal services must maintain facilities and employ staff across the territories they cover in order to provide universal service to the population. These facilities sometimes operate seven days a week, 24 hours a day. It is more than likely that postal operations will be affected whenever an emergency occurs anywhere on their territory; however, this article will focus on risks related to meteorological hazards. Through highlights of recent events in the Philippines, Bosnia-Herzegovina and Vanuatu, it will illustrate the disruptive effects that extreme weather can have on postal operators. A case study from the United State Postal Service (USPS) will also be used to demonstrate the importance of meteorological information to day-to-day postal services.

The Universal Postal Union (UPU), the specialized agency of the United Nations that serves the global postal sector, leads international efforts aimed at helping postal services deal more effectively with the increasing frequent and ever more intense natural weather events that are occurring in the context of climate change.

The personnel and assets of postal services can be jeopardized by high intensity weather such as severe storms, high-speed winds, heavy rain, snow or other precipitation and extremes such as tornados and hurricanes. Their impacts – including extreme temperatures, wind, flooding, landslides and mudslides – may pose health and safety risks to postal employees and cause damage to critical infrastructure. This is true regardless of the size of the postal sector in a given country.

A modern postal service cannot function without basic infrastructure and networks for electricity, communications and transport – ranging from motor vehicles to railways and airlines. When storms result in blackouts or cancelled flights, it is challenging to deliver mail on a normal schedule. Weather and climate impacts threaten the continuity of postal operations and the performance of essential duties by public agencies even during emergencies.

The long-term impacts of climate change, such as sea level rise or drought, are also concerns for postal services located on flood-prone coastlines or exposed to, for example, the risk of forest fires. These slow onset events can destroy roads and postal facilities, making the processing and delivery of mail impossible. Climate scientists expect the frequency and severity of weather extremes to increase due to climate change, making disaster risk reduction planning at the national and international level more important for postal services.

Recent disasters offer an overview of the kind of damages postal operators need to cope with due to extreme weather events. In November 2013, Typhoon Haiyan struck the Philippines, taking upwards of 6 000 lives and displacing millions. Described as the worst natural disaster in the country’s history, it left devastation in its wake. Postal facilities were not spared. In the Eastern Visayas region, where the storm hit hardest, post offices and equipment were damaged or destroyed. In the City of Tacloban, the post office that serves as a regional distribution centre for about forty towns required a complete renovation after hurricane-force winds and surging waters knocked down walls, smashed windows and tore apart the roof.

In May 2014, several Balkan countries experienced flooding and landslides following heavy rainfalls. Bosnia-Herzegovina saw 25 killed and 90 000 displaced by the storm. The flooding also caused an estimated 1.9 million Euros (US$ 2.1 million) in damages to 19 Pošte Srpske buildings that were either completely or partially destroyed.

In December 2014 and January 2015, heavy seasonal rainfall resulted in large flooding in Malawi, which caused extensive damage to crops, livestock and infrastructure, including the postal network. Four post offices, two from the Southern Region and two from the Northern Region, were destroyed and postal operations were suspended in the affected areas.

In each case, and in many more, the UPU supported the affected postal services through its emergency assistance policy. But these examples show that there is also need for advance preparation in order for postal operators to avoid the worst consequences of natural meteorological hazards.

Postal services rely on meteorological information to prepare and react to severe and extreme weather. At the beginning of each day, the USPS, for example, issues a weather report to its operations managers based on official National Oceanic and Atmospheric Administration (NOAA) National Weather Service, as well as other open source, weather information. Beyond providing an overview of general conditions, the focus is on severe weather that could potentially impact operations such as a thunderstorm that could cause flooding that may disrupt USPS transportation systems. In summer months, areas with high temperature are highlighted for letter carriers who work outdoors in such conditions. In winter, extreme low temperatures are emphasized for the same reason.

Potential tropical cyclones are also highlighted. If a potential extreme weather event will impact employees and infrastructure, additional detailed and location-specific forecasts, with mapping using GIS, are provided to operations managers on site. Based on this information, operations managers take preparatory steps such as ensuring that employees are advised of emergency procedures, that infrastructure is secure and that any operational and network adjustments are carried out.

Due to the continuing drought in the western part of the United States, preparations for wildfire response are also regularly updated to improve the handling of such threats. USPS also takes account of meteorological information, both historical and forecasts for longer-term changes in weather patterns, in determining facility location and construction.

In the framework of its disaster risk reduction management policy, the UPU is helping its 192 member countries to prepare for, react to and recover from disaster that relate to natural hazards and extremes. The use of climate and weather information and predictions by postal operators in planning, policy and practice is a key component to improve the resilience of postal networks and for disaster risk reduction. Postal operators would most certainly benefit from better access to targeted and tailored weather and climate information to inform their decision-making on disaster risk reduction efforts to reduce economic losses and build resilience.

The vision and objectives of the Global Framework for Climate Services (GFCS) respond to that need. Postal networks could facilitate access to weather and climate information at local levels and be partners in early warning mechanisms and systems as is already the case in several countries such as Japan.

A cooperation agreement between WMO and UPU is currently in preparation on addressing postal sector disaster risk reduction challenges through weather and climate information and on the opportunities that the postal networks offer to reach out to people and communities when disaster strikes. This could enable the postal sector to further benefit from weather and climate data to increase their level of preparedness in the face of difficult times.

Predictability of postal services is important to customer satisfaction in a time of booming e-commerce. Weather conditions can be disruptive to the smooth handling of shipments along the postal supply chain. This is particularly relevant for international postal exchanges that go through a much higher number of facilities and locations as they transit from their places of origin to their destinations, using various networks, such as international airlines. In these circumstances, international transportation and handling contribute to greater volatility in the end-to-end quality of service performance of postal operators as they are particularly sensitive to weather conditions.

The prEDI algorithm in development by UPU is being designed to estimate delivery dates and times by using billions of international tracking events, available through UPU’s POST*Net electronic data interchange or EDI system. Weather data is expected to play a critical role in the algorithm.

Given that extreme weather conditions cannot necessarily be predicted when a customer orders online, prEDI will be programmed to reassess all probabilities in real time as soon as the occurrence of a major meteorological disturbance is confirmed. The customer, as well as any partner in the postal supply chain, could then be immediately informed about the new predicted arrival day and time. With greater variation in weather conditions and increases in extreme weather occurrences, integrating weather data into the UPU’s prEDI system could play an important part in managing customers’ expectations and increasing predictability of international postal services.