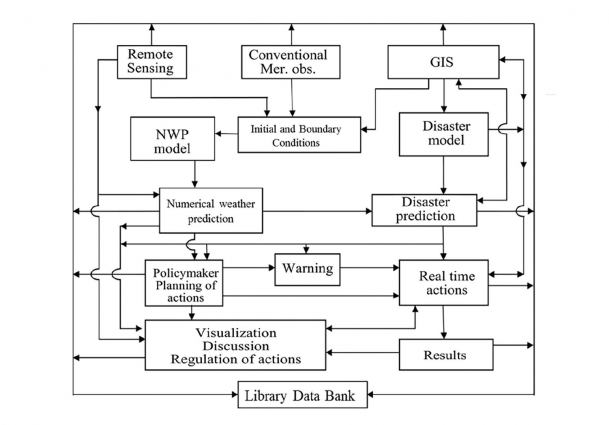 Protecting people’s lives and property against weather, climate and water-related disasters has been, and continues to be, a critical task in global sustainable development. It is especially important to meteorologists because nearly 90% of natural disasters are due to or are triggered by meteorological hazards.

China is located in a monsoon zone, where the weather and climate are highly variable, and where severe weather and climate disasters occur frequently. Chinese people have long suffered from such disasters, and have therefore gained experience in disaster mitigation and in the development of meteorological sciences. As far back as 2200–2100 B.C., records show that Emperor Yu helped the Chinese people by devising methods to combat floods and tame rivers. The mitigation of weather, climate and water-related disasters remains a high priority of the China Meteorological Administration (CMA) and associated research activities.

One cannot minimize the significant efforts of WMO in this area. WMO coordinates observations, monitoring and exchange of data worldwide and promotes research to improve predictive skill for extreme meteorological events. For example, the WMO Global Data-Processing and Forecasting System (GDPFS) facilitates data sharing as well as the sharing of numerical weather and climate prediction capabilities. Chinese meteorologists benefit from WMO activities, and, in turn, make efforts to contribute to them, thus ensuring the common welfare of humankind.

Scientists have made significant progress in monitoring, predicting and managing weather, climate and water-related disasters over the last century. This has been due to application of satellite remote-sensing data, numerical weather/climate prediction and data processing using high-performance computers, which started in the 1960s and matured in the 1990s.

The following now exist: a complete set of meteorological satellites capable of monitoring every weather system occurring at any time and in any place; sophisticated meteorological models capable of predicting weather from several hours to several days ahead and climate anomalies from months to years ahead; and supercomputers capable of processing “big data” quickly.

In 1900, no warning was given when Hurricane Galveston (1900), one of the worst natural disasters in the history of the USA, made landfall in Galveston, Texas, because no monitoring and prediction were available at that time. The hurricane completely destroyed the city, and some 6 000 to 8 000 people lost their lives.

In 1992, meteorological satellites provided continuous monitoring for Hurricane Andrew. But the effective warning was given only 24 hours before the hurricane made landfall, because numerical weather prediction (NWP) was not sufficiently advanced at that time.

A mere 20 years later, warning that Hurricane Sandy (2012) would make landfall was issued 5 days before it reached the coast of the USA, despite the storm’s unusual trajectory. This was the result of advancements in NWP modelling with assimilated meteorological satellite data. Interestingly, NWP models without assimilated meteorological satellite data predicted that the hurricane would move continuously eastward without turning to the coastal zone and making landfall.

In 2014, Chinese FengYun-2 and FengYun-3, as well as American and Japanese, geostationary satellites followed the development and trajectory (12–20 July, Figure 1) of Super Typhoon Rammasun. Figure 2 shows the trajectory of the centre as predicted by various NWP models on 16 July 2014 (3 days before landfall on Hainan Province).

The satellite data and NWP models permitted the CMA to issue warnings to ships and fishermen before Rammasun entered the South China Sea, and warnings of landfall in Hainan Province 36 hours in advance. Provincial and city governments could make plans and take immediate actions to mitigate damage with such early warnings. When Rammasun made second and third landfalls on Hainan and Guangdong Provinces, respectively, it brought strong winds (maximum of 60–63 m s−1), heavy rainfall and flooding (3 m) to the coastal zone and high ocean waves (13 m). These caused serious damage.

There was no loss of human life in Guangdong Province from Rammasun, because of the continuous monitoring, accurate prediction, strategic planning and appropriate responses. However, economic losses were substantial, due to the strength and complicated asymmetric structure of the typhoon. These are still difficult to predict and require further investigation.

WMO set up the World Climate Research Programme (WCRP) in 1983, after routine NWP was established in several developed countries. It published a 10-year plan for the development of dynamical (numerical) climate predictions (DCPs).

During the implementation of WCRP in China, experiences in 1989 showed that it might be possible to extend DCPs to two seasons and even to a 1-year time frame. Extra-seasonal prediction (for two seasons) using a DCP model (IAP-DCP) became one of the operational schemes in routine climate prediction at CMA in 1994.

Taking the summer (June, July, August (JJA)) rainfall anomaly prediction as an example, IAP-DCP consists of three parts: ensemble predictions initiated as of every February; a correction system to remove model bias by statistics based on hindcasts; and a final (formal) prediction, which consists of three components as shown in Figure 3 (A–C). The figure shows real-time prediction of precipitation anomalies for summer (JJA) 1998 by IAP-DCP, initiated from 1 to 28 February.

In the example in Figures 3-4, the climate prediction indicated floods might occur in the middle to low reaches of the Yangtze River and along the Nen River (north-east China). Thus, a warning report was submitted at the beginning of March to the central and provincial governments, to begin preparation for flood prevention.

The floods subsequently occurred with unusual severity. The Yangtze River bank collapsed suddenly at Jiu Jiang, in an unexpected location. Emergency responders had to mobilize workforce and materials from across China. Chinese President Jiang Zemin went to Jiu Jiang to lead efforts on mitigating the flood damage and sealing the collapsed bank. Subsequent satellite monitoring and NWP were very helpful for engineers tasked with sealing the bank. Numerical climate prediction was therefore useful for early preparation to manage the flood, and satellite monitoring and NWP were important during management of the disaster.

Some shortcomings of the predictions were that the predicted summer rainfall was not strong enough and that sufficient attention was not paid to the prediction of disaster situations (especially the affected area, depth of floods, and the time and place of bank collapse, which was a serious problem).

In summary, the following steps are important in the management of disasters risks during extreme meteorological events:

Every step in the process of disaster management and mitigation should be improved to address specific scenarios and demands, especially steps (2), (4) and (5). Close cooperation among meteorologists and scientists of other disciplines is necessary for continued success.

The following are some suggestions for the way forward, based on Chinese experiences, plans and thinking.

The WMO Integrated Global Observing System (WIGOS) is comprehensive and essential for continued improvements in the integration and sharing of observational data. China will make contributions to the space component of WIGOS by launching an early morning polar-orbiting satellite in the FengYun-3 series and new-generation geostationary satellites, the FengYun-4 series, with high spatial and temporal resolutions and enhanced monitoring capabilities (e.g. vertical profiles of temperature and humidity, finer cloud structure and lightning).

WIGOS will have three polar-orbiting satellite sets (FengYun-3 early morning, NPP afternoon and Metop mid-morning) in its space component in the future. This will constitute an orbit fleet for observing the entire globe and providing the data needed for NWP data assimilation every 6 hours (Figure 6).

The FengYun-4 satellite series will be helpful for monitoring and predicting tropical weather systems such as typhoons, Madden–Julian oscillations, strong thunderstorm activity, heavy rains or floods over Pacific and Indian ocean regions. Preliminary results of monitoring thunderstorm and lightning processes using FengYun-4A (the first experimental satellite of FengYun-4, launched in 2016) have already demonstrated their usefulness.

Chinese scientists are also considering new applications of small satellites and high-resolution satellites to explore and monitor weather systems. Preliminary results obtained by a Chinese scientific research satellite, Gao Fen-4 (launched in 2016), showed that Typhoon Nepartak (2016) had an eye with very fine structure. In contrast, the eye of a typhoon has been considered to be a region of calm weather in the past.

CMA is building the Longmen Integrated Ground-based Station in Guangdong Province for observing cloud and rain microphysics, their vertical profiles, and droplet spectra provided by radars, lasers and other methods. The purpose is to develop observational- and physical-based parameterization schemes to improve NWP.

China has a network of surface automatic stations with very high resolution, providing a nearly continuous meteorological dataset in space and time. For example, there are 5 256 automatic surface meteorological stations in three provinces of southern China: Guangdong, Guangxi and Hainan. Assimilating these very useful but inhomogeneous data into NWP models is a problem yet to be solved. Some schemes have been experimented with, but further improvements are necessary to enable routine application.

Design numerical models for disaster prediction, and models for optimal management of disasters and real-time regulation

Meteorologists can currently make routine predictions of disaster situations based on past experiences and case studies of previous events. However, this is not purely objective, and big data need to be processed, especially those obtained from geographical information systems (GIS).

A prediction (priori estimation) of losses may be made using digital data or maps to represent disaster situations and data from GIS to represent the social situation. Then, the predicted disaster situation and priori-estimated losses can be provided to policymakers for management of disaster risks. Real-time management of disaster events is conducted by policymakers according to their experiences and collective discussions.

It is desirable to carry out these activities objectively, using supercomputing to help meet future demands. The design of numerical (quantitative) models for predicting disaster situations and models for optimal management of disasters and real-time regulation is necessary and important.

Flooding models, slide models and other models are currently under development, but they require additional improvements so that they may be applied in the near future. This can be accomplished by combining supercomputing and relevant science and technology.

Optimal management means that the management plan should be made according to some principles, for example, minimum workforce and financial consumption for the actions and minimum losses due to the mitigated disaster. Actions consist of evacuation of residents, mobilization of workforce and materials, assessment of labour and engineering required, transportation, control and regulation of water levels and flow (for flooding cases), and so on. Optimal management is therefore associated with complicated mathematical problems, which can be solved only using supercomputing.

Data communication and visualization are important during real-time regulation of actions. Using such methods, techniques and facilities, the evolutionary processes of weather and disaster situations, as well as the results of actions, can be visualized in real time, and policymakers can make their decisions.

There is a need to build a bridge – a scientific platform – to accelerate research through to routine application, to address the required improvements listed above. Such platforms have been already established in Europe, Japan, Germany, United Kingdom and USA.

China is developing a scientific platform, the Earth Numerical Modelling System (ENMS), through cooperation of the Chinese Academy of Sciences, CMA and several Chinese universities.

The goals of ENMS are to:

China has been producing and accumulating large amounts of data and valuable datasets (big data) during long-term meteorological observation, prediction and management of related disasters. Developing methods and technologies for treating big data will be important and helpful, especially for prediction and management of disasters in certain areas. Scientists are developing new theoretical and practical methods, in addition to existing statistical methods. These new methods include so-called rigorous and quantitative causality analysis methods. It will be interesting to try these innovative methods in practice.