My vision: An interview with the new WMO Secretary-General 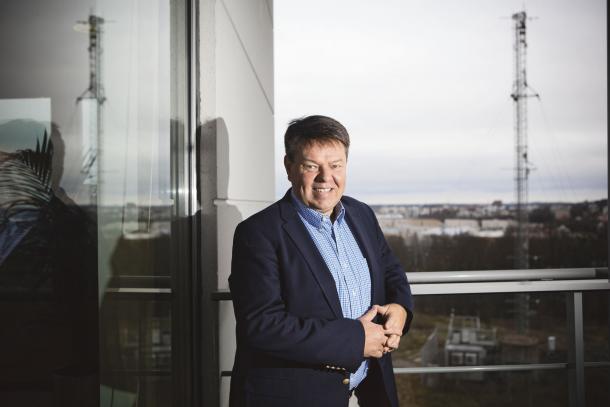 My vision: An interview with the new WMO Secretary-General

WMO welcomed its new Secretary-General, Petteri Taalas, on 1 January. He came to the Organization following a tenure as Director of the Finnish Meteorological Institute (FMI) from 2002 to 2015, which was interrupted from 2005 – 2007 when he served as Director of the WMO Development and Regional Activities Department. His career at FMI started in 1986, where he was, in turn, head of research, scientist, leader of ozone research and research professor of remote sensing, before taking on his role at the helm of the Institute. While in that role, he became known in the Finnish media as “Mr Climate Change.”

The Secretary-General has been active on the international scene throughout his career. Since 2008, he has participated in the coordination and implementation of WMO programmes as a Member of its Executive Council. He was also on the European Centre for Medium-Range Weather Forecasts (ECMWF) Council from 2002 to 2005, then from 2007 to present. From 2010 to 2014, he chaired the EUMETSAT Council, which he had been a member of from 2003 to 2005. Mr Taalas was Finland’s delegate of to Intergovernmental Panel on Climate Change 2007 to 2015.

Secretary-General Taalas comes to the Organization with a clear mandate from the World Meteorological Congress. The Bulletin interviewed him on the road ahead at the end of his first month in office.

What are your priorities as you take office?

My priorities are as defined by the World Meteorological Congress in May 2015: Eight priorities were approved that will shape decision-making over the next four years. Congress designated specific areas, for example, aeronautical meteorology – a source of income for many Meteorological Services – as priorities. Disaster risk reduction, climate services and capacity development were also prioritized. The role of WMO is also paramount in coordinating the scientific research and safety services needed for the Arctic regions.

However, three important international agreements were reached last year that we will also respond to: A major climate change agreement was reached in Paris at COP212 in December; earlier, in Spring, the Sendai Framework for Disaster Risk Reduction3; and in September, the UN General Assembly approved the Sustainable Development Goals (SDGs).

These three agreements will also guide our work, and WMO and its Members have an important role in their implementation.

I see capacity development as a major challenge for WMO. The majority of our Members need help to enhance their service capabilities. By transferring know-how from one person to another, between national hydrological and meteorological services and related institutions, from country to country, we will strengthen all our Members and enhance and develop capacity worldwide.

We need to find resources for such highly important work. We need to more actively develop closer cooperation with donor organizations and other institutions, such as the World Bank, European Commission, regional banks and other organizations, in order to get resources owing to assist our Members. We also have to be more interactive with governments and ministries in order to improve the profile of Met Services so that they can get the support and visibility they need to ensure that there is a proper level of governmental resources for their work. That’s the big picture.

How can WMO best work and coordinate with Members and the other key players in the areas of meteorology, climatology and hydrology, whether information providers, intermediaries or end-users?

I think partnership is a very high priority issue. We are still a fairly small Organization, so we need to partner with other players. I am highly interested in building win-win partnerships with other international institutions as well as other UN agencies like FAO4, UNEP5, WHO6, UNESCO7 and UNDP8. In addition, we must have closer relationships with donor organizations to attract resources for our work at the WMO Secretariat, but especially for our Members.

To attract these partners, we need higher visibility, particularly outside of our community. We deal with many highly interesting and attractive elements such as climate adaptation, disaster risk reduction and food security. Besides these, there are new services we can offer, for example, to the energy sector to optimize the use of solar-, wind-and hydropower-based energy production. We also monitor air quality, a worrisome issue in many big cities worldwide, especially in Asia. With urbanization, many cities are also more exposed to flash flooding and coastal ooding, and other weather, climate and water related impacts. In all of these areas, there are opportunities to provide new services at the national level that will further enhance the socio-economic value of resources invested in the national hydrological and meteorological services.

WMO and its Members have know-how and services of very high importance. These skills should be advertised to decision-makers and potential new customers for those services.

Your goal then is to extend the reach of the Organization by increasing services from the Secretariat?

The primary group with which I would like to reinforce services is our Members. The majority of the work of WMO is done by Members, the Secretariat acts to a large degree as a coordinator and facilitator for them. This is reflected by the excellent people and staff in-house at WMO.

However, the know-how required for the concrete work of the Organization rests with Members. We must motivate them to allocate their best expertise for the global common good. This was also emphasized in the WMO Technical Commissions’ Presidents meeting recently. If we can make it attractive for Members to dedicate their experts to the work of WMO on priorities they set at Congress that will ensure the best services in return to all Members.

In what area can WMO make the most impact on the global scene? And how?

In the global arena, the scientific work of WMO makes it an important player in climate mitigation, but even more so in climate adaption. Disaster risk reduction is a WMO and a UN priority as defined in the Sendai Framework. In the next 50 years, we will see more frequent and intense disasters related to weather phenomena. Thus, WMO will need to invest to further develop early warning services – a very powerful adaptation tool in practical terms. This will require strengthening the service capabilities of the meteorological and hydrological services in several Members.

National meteorological and hydrological services are the backbone of disaster risk management as they provide early warnings to other national safety authorities, private enterprises and to the general public. That role can be further enhanced when it comes to planning for the future. We must adapt to the changing climate and I would like to see the National Met Services – in partnership with other national institutions – play a role in adaptation planning.

There is a growing need to communicate scientific findings to decision-makers and to general public. The WMO Members with their agencies form the backbone of physical climate science. WMO also hosts the IPCC9 Secretariat. Climate change impacts and greenhouse gas concentrations need to be monitored as the Paris Climate Agreement moves forward. Mitigation measures are urgently needed to limit warming to two degrees.

The public wants more and better information on environmental issues and the actions they can take. What is the role of WMO in this area?

We have to stick to scientific facts, what has been measured with the WMO observing systems or has been calculated in prediction models, for example, based on various emission scenarios. We are not a political player but the importance of the fact-based scientific communication we produce cannot be underestimated.

We also need to strengthen our Members’ capacity to communicate climate science. The developed countries are fairly good at delivering such information to their citizens and decision-makers, but most of our Members need support in this area. We can provide some basic materials to assist them with this kind of communication. We should support and strengthen communication skills in the national hydrological and meteorological services and related national institutions, so that they are recognized as important contributors to the well-being and sustainable development of their countries.

Can you provide an example?

When the IPCC Fifth Assessment Report (AR5) was finalized in 2014, National Met Services based their communications on the graphical information and facts in the report. We could have helped them form better messages.

The next COP meeting in Morocco later this year will offer another opportunity for communication. WMO and the national meteorological and hydrological services should be highly visibility there. We should help the National Met Services and research institutions to deliver clear, concise messages to their governments in anticipation of the event. That is one example of work that we could be doing.

From your point of view, what are the key challenges the Organization is facing? What in your background supports your present function as the Secretary General?

There is a need to update some structures and working practices in the Organization. We have excellent, highly qualifed, staff but some internal working practices, how meetings are run – our participation in them – and how we assist our Members, need to be revised. We are planning to conduct a stakeholder survey on how satisfied they are with our functions and structures.

I have been happy to notice that the WMO staff is highly motivated to reshape working practices to offer better value for money to the Members. I’m also personally convinced that it is feasible. WMO is regarded as a good UN Agency.There is an opportunity to become an excellent one. WMO is also in a unique position thanks to the close global spirit of co-operation among the National Meteorological and Hydrological Services.

My past experience has prepared me for this task. I have a science background and have been working on climate change issues for many years. Under my leadership, FMI enhance its service capabilities and was recognized nationally for its excellence: every year for the past 10 years, it was ranked the best public sector organization. FMI actively assisted several National Meteorological and Hydrological Services in all WMO Regions. Finland is one of the most active countries in development cooperation and in sharing know-how with others. I was also the Chairman of the Board of a fairly big university and sat on the Board of Directors of an international energy company. And, of course, I worked here at WMO as the Director of Capacity Development and was a Member of the Executive Council for the last eight years.

Within the human and financial resources approved by Congress, where should emphasis be placed to optimize their use?

We were happy to get a slight budget increase at the last Congress, which shows confidence of the Members on WMO. There are also possibilities to attract external resources to enhance our service capability and help our Members improve theirs.

By enhancing our internal processes and revisiting our work practices, we could be more effective in our everyday work. The well-being of staff is also of great importance to me. We are also planning to conduct a satff satisfaction survey to see where we are today. We will analyse the results to see how we can improve. I like to see people who are running fast with a smile on their face.

You are just starting this job, but looking to the future, how would you like WMO to be recognized at the end of your term?

I would like WMO to be doing more for its Members, especially their National Meteorological and Hydrological Services so that they are more satis ed with the services that we are providing to the outside world. I would like to see a WMO with greater visibility in climate and disaster issues and to be seen as a credible partner among international players. Mostly, I would be happy to see that we had contributed to the well-being of the peoples in all WMO Member states and territories. 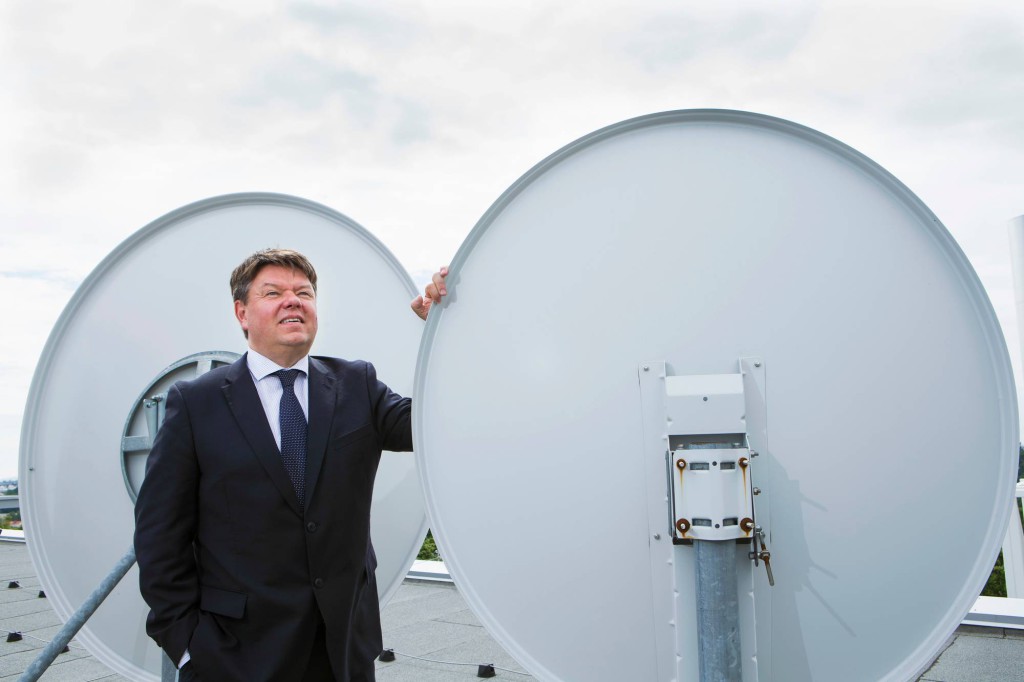 Secretary-General Taalas on the roof at the Finnish Meteorological Institute (FMI) with geostationary satellite receiving antennas.