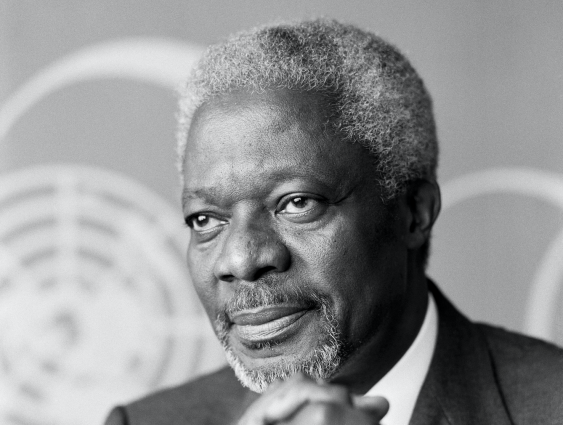 It was a shock to learn of the unexpected passing away of Kofi Annan. I had the privilege to interact with him and to learn from him for more than 20 years.

Kofi Annan was the ultimate incarnation of a true Statesman, always looking at the big picture. His perspective would stretch as far as possible into the future and with a remarkable skill for linking complex issues in very different fields. Although there are innumerous illustrations of this, I shall always remember his decisive role in the development and adoption of the Millenium Development Goals, without which it would have been impossible to reach the universal consensus on the Agenda for Sustainable Development and the associated SDGs a few years later. He was a true believer in multilateralism.

His personality was exceptional. Despite raising to the highest possible responsibilities, he remained himself, never showing any trace of arrogance and with a disarming humility. He had a unique way of making people interacting or working with him feel special. Invariably, he would ask the most thought provoking questions. When thinking about him, many words come to the mind: vision, wisdom, courage, elegance, compassion… When faced with a difficult situation, one would often reflect and ask oneself: what would he have done in such a situation?

From the WMO perspective, so many things come to mind that it is not possible to pay tribute to all. I remember in particular the first Chief Executive Board (ACC at the time) meeting of the United Nations, that WMO hosted in its new (still unfinished) headquarters building in April 1999. He referred to WMO as “the original networker.” WMO will also always be grateful for the outstanding support he provided to the fight against climate change and natural disaster risk reduction in particular. His personal support for the 3rd World Climate Conference organised by WMO in Geneva in 2009 was decisive. On this occasion he stressed that the WMO “mission was now more important than those who established it 60 years ago could ever have imagined...” The Conference led to the development of the Global Framework for Climate Services (GFCS), which he actively supported. WMO was also privileged to benefit from his advice and support in other critical areas. For example, when WMO engaged to strengthen its approach on administrative and ethical issues. We should also very grateful to Kofi Annan for the attention he paid to water issues, in particular, his critical role in the establishment of UN-Water, one of the most effective coordination mechanism in the UN system. Just a few months ago he addressed WMO Executive Council with powerful words stressing the important role of WMO in the water area.

I had the privilege to attend, in different capacities, CEB (or ACC) meetings under three UN Secretary Generals. Kofi Annan was unique in the way he listened to all point of views, accepted different opinions and led in a quiet, but firm way. He was highly respected by all his CEB colleagues as the “primus inter pares.” He was always passionate for the UN to demonstrate it could make a difference and contribute to make the world a better place. He was never discouraged by the many obstacles encountered. He was in many respects the voice of the voiceless and he relentlessly put his power at the service of the powerless.

We at WMO have lost a true friend. We shall miss him greatly, but at the same time he will continue to inspire us.