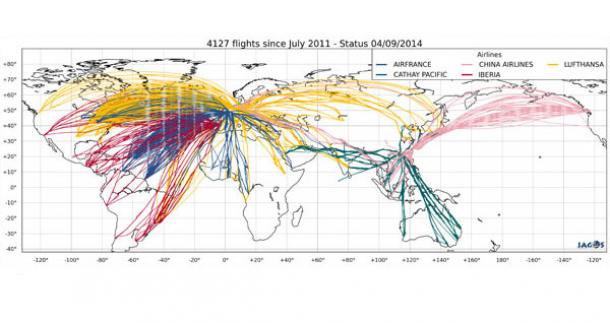 The In-service Aircraft for a Global Observing System (IAGOS) uses commercial passenger aircraft as a platform for the measurement of the composition of the atmosphere. It is one component of the European Research Infrastructure for gathering long-term, routine in-situ observational data on the state of the atmosphere.

Global aviation offers a cost effective and efficient way of collecting such information, and optimizes use of existing infrastructure. By deploying a set of autonomous instruments aboard passenger aircraft of internationally operating airlines, IAGOS collects crucial atmospheric data – most notably in regions poorly, or never, sampled by other means and in the critical upper troposphere and lower stratosphere region – at a global scale and in high resolution. In addition, vertical profiles of trace gases and particles are gained during each single landing of instrumented passenger aircraft. Therefore, IAGOS perfectly complements groundbased networks and satellites instruments and makes a valuable contribution to the Global Atmosphere Watch (GAW) Programme.

The European MOZAIC (Measurement of Ozone and Water Vapour on Airbus In-service Aircraft) programme initiated the use of in-service aircraft platforms for probing atmospheric state parameters and chemical composition in the early 1990s. Airbus A340-300 passenger aircraft were equipped with compact sensors for water vapour, ozone and carbon monoxide. Almost in parallel, the European CARIBIC (Civil Aircraft for the Regular Investigation of the Atmosphere Based on an Instrument Container) project pushed for the monthly deployment of a cargo container equipped with instrumentation for a larger suite of components than aboard the Airbus A340-300 aircraft. It would combine in-situ measurement methods, remote sensing techniques and the ollection of samples for post-flight analysis in the laboratory.

IAGOS combined the two complementary approaches and extended them to cover a broader set of atmospheric constituents and a larger fleet of deployed aircraft. IAGOS-CARIBIC pursues the CARIBIC project, while IAGOS-CORE continues the MOZAIC initiative, which will include operation of autonomous instruments on up to 20 long-range aircraft after full implementation for continuous measurement of climate-relevant reactive gases and greenhouse gases as well as aerosol particles and clouds. In May 2014, the MOZAIC programme celebrated its 20th anniversary at Airbus headquarters in Toulouse, France.

The suite of instruments operated on board of IAGOSCORE aircraft consists of one unit (Package 1), which measures ozone, water vapour, carbon monoxide and the number concentration of cloud particles. In addition, there is a second unit (Package 2) with several options (a, b, c and d), targeting specific chemical substances and properties such as nitrogen-containing compounds, greenhouse gases or aerosol particles, which will be installed in aircraft at the end of 2014. The fully equipped IAGOS-CORE instrument rack weighs approximately 120 kg and is mounted in the avionic bay of Airbus A340/A330 aircraft.

IAGOS-CORE has started its operation with the Lufthansa A340-300 “Viersen” in July 2011 out of Frankfurt Airport. The second Airbus A340 went into service in July 2012, operated by China Airlines from its home base in Taipei, China. In 2013 instruments were installed on an Air France (out of Paris) and an Iberia (based in Madrid) aircraft, and on an Airbus A330 operated by Cathay Pacific (Hong-Kong, SAR China).

In 2010, the CARIBIC container was fully revised and recertified and returned to operation aboard a Lufthansa A340-600 with a deployment of four flights per month. Thus, in 2014, the fleet counts five IAGOSCORE (Air-France, Lufthansa, Cathay Pacific, China Airlines and Iberia), one IAGOS-CARIBIC (Lufthansa) and one MOZAIC (Lufthansa) aircraft (until the end of year 2014). Destinations covered by CARIBIC are globally distributed, with the majority of flights heading to North America and the Far East and a few to South Africa and South America. A map of recent destinations is accessible at www.caribic-atmospheric.com.

The data set which has emerged so far from the IAGOS project and its predecessor programs are freely accessible for the global scientific community on request via the IAGOS database hosted by the French joint venture ETHER (CNRS/CNES) atmospheric data centre.

The WMO Aircraft Meteorological Data Relay programme (AMDAR) and IAGOS both use civil aviation aircraft for observations, but they cover different aspects of the atmosphere.

AMDAR uses predominantly existing onboard sensors, computers and communications systems to collect, process, format and transmit meteorological data to ground stations via satellite or radio links. AMDAR collects and distributes data on wind speed and direction at airports, on meteorological variables from airplanes at cruise level, on turbulence, and on water vapour and humidity (from suitably equipped aircraft) and provides accurate measurements of coordinates (time, latitude, longitude and pressure altitude). The main focus of AMDAR is temperature and wind speed and direction measurements.

IAGOS is designed for global coverage and a lifetime of at least 20 years. It builds on 20 years of scientific and technological expertise gained in MOZAIC and CARIBIC. IAGOS was included on the “European Strategy Forum on Research Infrastructures” (ESFRI) roadmap in 2006. It is listed among ESFRI success stories.

IAGOS has secured a sustainable funding through international observing initiatives, such as the Global Earth Observation System of Systems (GEOSS) and its European component, the Copernicus Programme, and from national funding institutions. In early 2014, it implemented a sustainable governance structure, IAGOS-AISBL (Association Internationale Sans But Lucratif – not-for-profit organization), in order to ensure long term operation and continuous data provision.

The value of IAGOS

IAGOS provides observations of high quality – using identical systems with identical and regular Quality Assurance procedures including calibration against reference nstruments, based on GAW standard procedures – that is inherently better than that from many stations operated by different institutions using different instrumentation. This data is essential for climate research, emissions monitoring, weather prediction and air quality forecasting.

This valuable information on atmospheric composition is improving understanding of global and regional air quality as well as of the potential impact of greenhouse gases on climate. MOZAIC (see list of publications) and CARIBIC data have led to the publishing of important findings on global distribution and trends of ozone, water vapour, nitrogen and carbon oxides. Several of them are used in the recent Task Force on Hemispheric Transport of Air Pollution (2010) report and the Intergovernmental Panel on Climate Change Fifth Assessment Report (AR5, 2013). The Copernicus Atmosphere Monitoring Service uses the data for air quality forecasting demonstration tool. It is also employed for carbon cycle models for the verification of CO2 emissions and Kyoto Protocol monitoring. Regional air quality models assimilate IAGOS near real-time (NRT) data to improve forecasts. More specifically, IAGOS data is of particular interest for: 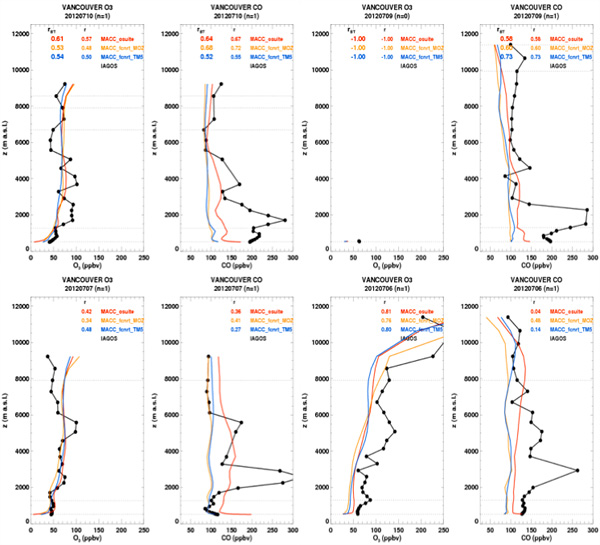 IAGOS builds on previous European initiatives with novel technological developments and a strong emphasis on expanding the network in the Pacific, North America and the Southern Hemisphere. Success relies on the willingness of airlines to support the operation. In the coming years, IAGOS will provide the accurate knowledge and long-term surveys of global atmospheric chemical compositions required to improve understanding of the changing climate system, to reduce the uncertainty of climate predictions and to mitigate climate change along with its impact on air quality.

Ozone and CO profiles from IAGOS (black line) compared to different versions of the MACC model (color lines). This data was recorded in July 2012 over Vancouver. They highlight the impact of Siberian biomass burning plumes as shown by high CO mixing ratios in the lower troposphere. (Note: IAGOS observations are averaged to match the model vertical resolution.) Such profiles and additional information may be found in the IAGOS-MACC dedicated website

Visit www.iagos.org for further details on the status of the fleet, upcoming meetings and other news.

IAGOS wishes to recognize the financial support received during its preparation, implementation and operation phases from the European Commission, national research programs in Germany (BMBF), France (INSU-CNRS, MESR, CNES) and the UK (NERC), in addition to institutional resources in Germany (Helmholtz Association, Max-Planck-Society, Leibniz Association), France (Université de Toulouse, Météo-France) and the UK (University of Manchester, University of Cambridge). It is most grateful for the continuing support of participating airlines (Lufthansa, Air-France, Iberia, Cathay Pacific and China airlines).