Ocean Observations Programmes to Monitor Climate and Address Societal Needs: The Role of the OOPC 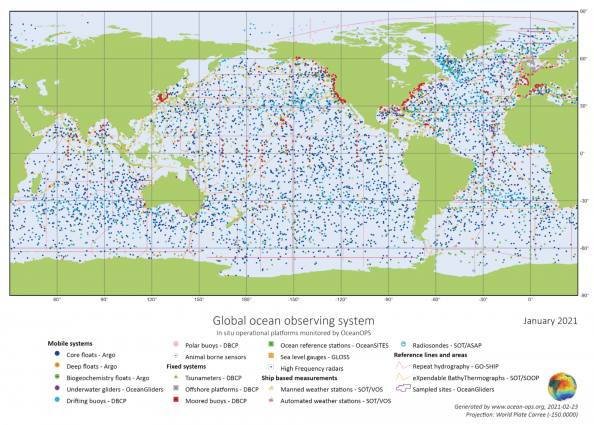 Ocean Observations Programmes to Monitor Climate and Address Societal Needs: The Role of the OOPC

The ocean absorbs, transports, redistributes and stores heat in such a way that it acts as a regulator of climate. More than three billion people rely on the ocean for their livelihoods. The ocean also provides a wealth of socio-economic, environmental and cultural benefits to all mankind. Understanding the ocean is key to harnessing and sustaining those benefits, while at the same time preserving its health.

But the ocean is vast. While many nations have ocean monitoring programmes in place, these are often limited to the area within their respective Exclusive Economic Zones (EEZs). Large expeditions and experimental campaigns into remote ocean basins have collected invaluable data that have changed our understanding, not only of the ocean, but of the whole Earth; however, they have not provided a comprehensive picture of all its surface. Satellites changed this to a great extent, but only for the upper layers of the ocean. Whilst humanity has mapped the surface of Mars extensively using a range of orbiting space probes, only 20% of the seafloor has been mapped.1 Even after decades of oceanographic campaigns, experimental platforms and satellites – as well as other technological headways like the revolution of autonomous sensors – the picture is not complete, we have obtained snapshots, not a comprehensive view.

The design of an observing system to monitor the ocean in all its width and depth in a sustainable, continuous way, is fundamental challenge that requires a global approach. In 1996, the Ocean Observations Physics and Climate (OOPC) panel was formed under three United Nations programmes – the Global Ocean Observing System (GOOS), the Global Climate Observing System (GCOS) and the World Climate Research Programme (WCRP) – to address this challenge.2 Established in 1991, 1992 and 1993 respectively, these three programmes have the same co-sponsors: WMO, the Intergovernmental Oceanographic Commission of UNESCO (IOC-UNESCO), and the International Scientific Council (ISC)3.

The OOPC was given three goals:

These goals have evolved with time and the initial focus on physical variables has expanded. This article will describe the achievements and progress of OOPC over the last 25 years.

The initial focus of OOPC was the open ocean, while other GOOS panels and groups were in charge of the enclosed and shelf seas and near-shore coastal seas. In its first years, OOPC produced a number of reviews prompted by the arrival of new technologies and observing capabilities. Two fine examples are the Global Sea Level Observing System (GLOSS) in view of new satellite capability and the Ship-of- Opportunity Program (SOOP). The panel was also involved in forming the Global Ocean Data Assimilation Experiment (GODAE, 1997), which placed new demands on the ocean observing system, and in developing the concept for the very successful and still operational Argo program4.

OOPC’s early work culminated in the First International Conference on the Ocean Observing System for Climate, held in San Rafael, France, in October 1999 (OceanObs’99). OceanObs’99 cemented the foundations of what we now know as the sustained ocean observing system for climate. From OceanObs’99, there emerged a consensus within the ocean observing communities to undertake an internationally coordinated sustained global ocean observing effort for ocean physical and carbon variables with respect to climate applications.

During the 2000s, OOPC worked with various partners to support the establishment of several sustained observing networks, building on the OceanObs’99 recommendations. These include the establishment of the OceanSITES moored time-series initiative in 1999, and development of the International Argo array of profiling floats in 2000. OOPC’s involvement was critical to brokering data agreements and incorporating these new networks into existing programmes, such as the SOOP and the global eXpendable BathyThermograph (XBT) network, and in connecting to the growing number of satellite missions. In 2001, OOPC conducted a review of the Tropical Moored Buoy Array. During this period, OOPC partnered with WCRP in the Climate and Ocean: Variability, Predictability and Change (CLIVAR) project and collaborated with other WCRP panels, ensuring both the development of a sustained ocean observing system and providing input to regional and basin process-studies. Building on its input to the establishment of GODAE, OOPC’s indirect sponsorship was vital to bringing climate change considerations into the plan for the development in 2002 of what is now the Group for High Resolution Sea Surface Temperature (GHRSST) project.

The second International Conference on the Ocean Observing System for Climate (OceanObs’09) was held in Venice, Italy, in September 2009, with OOPC as one of its leaders. OceanObs’09 recognized the utility of ocean observations beyond climate and the need to expand beyond physical variables to include biogeochemical and ecosystem variables within the ocean observing system. Thus, a key recommendation from OceanObs’09 was for international integration and coordination of interdisciplinary ocean observations. To this end, there was strong engagement with the various ocean communities involved in ocean observations and with end-users. The OceanObs’09 sponsors also commissioned a Task Team to respond to this challenge, leading to the release in 2012 of A Framework for Ocean Observing (FOO) (Lindstrom et al., 2012; Tanhua et al., 2019).

2010-2019: Beyond physical variables and towards societal needs

The FOO applied a systems approach to sustained global ocean observing. It used Essential Ocean Variables (EOVs) as the common focus and defined the system based on requirements, observations, and data and information as the key components. Notably, it incorporated both coastal and open ocean observations. The assessment of feasibility, capacity and impact for each of the three system components was based on readiness levels, that is to say concept, pilot and maturity. The FOO provides guidelines for evolving the observing system in the service of a broad range of applications and users. To support expansion of the ocean observing system, GOOS expanded to include three disciplinary panels: OOPC became the physics and climate panel, International Ocean Carbon Coordination Project (IOCCP) provided oversight of ocean biogeochemistry, and a new biology and ecosystems Panel (BioEco) was formed. OOPC retains the dual roles of ocean panel of GCOS and physics panel of GOOS. Delivery to GCOS requires OOPC to work across all components of GOOS, coordinating ocean input and interacting with its sibling Terrestrial (TOPC) and Atmosphere (AOPC) GCOS panels.

The OceanObs’19 conference sought to further align science, technology and human capacity in ocean observing to address growing and urgent societal needs. It emphasized the importance of ocean observations as the key source of information on natural hazards – from harmful algae and bacteria blooms, tsunamis, storm surges, marine heatwaves and storms to other extreme weather events – ecosystem health and biodiversity, ocean pollution, and sea level change. It highlighted the need for observations to support ecosystem-based management, marine and weather forecasting, climate predictions and projection, marine safety and navigation, decision support for climate adaptation, deep-ocean exploration, and seafloor mapping, among many other areas. The need to integrate ocean observation and research agendas to meet societal needs is becoming more important than ever (Visbeck, 2018).

After 2020: The future of ocean observations and coordination efforts

In this article we have described the history and some successes of OOPC, with its multiple responsibilities towards GCOS, GOOS and WCRP. Given the increasing complexity of the mix of observing platforms and sensor technologies, and the ever-expanding users, and their differing and sometimes divergent requirements, OOPC faces new challenges. To address these challenges, the questions that OOPC will need to consider are (Sloyan et al., 2019):

In January the UN Decade of Ocean Science for Sustainable Development 2021-2030 was launched. It offers a once-in-a-life-time opportunity to seek solutions to improve the knowledge of the ocean and transform its status according to the Sustainable Development Goals (SDGs). The focus of the Decade is on science and several directions for research and development have been put forward. However, theoretical knowledge is not sufficient. It is necessary to identify who must do what and to stimulate a move from scientific knowledge to actionable solutions. In seeking to answer the questions above, OOPC will continue to support GOOS, GCOS and WCRP in connection with the ocean observing community and other stakeholders to engage in transformational programs in the framework of the Decade, to advance a fit-for-purpose ocean integrated observing system to serve society across all requirements.

1 The mapping the entire ocean seabed is the very ambitious goal of the Nippon Foundation-GEBCO (General Bathymetric Chart of the Oceans) Seabed 2030 Project.

2 The OOPC superseded the Ocean Observing System Development Panel (OOSD, 1990–1994), which had been charged with the design of an ocean observation system for climate.

3 GOOS and GCOS have an additional sponsor: the United Nations Environment Programme (UNEP).

5 Unlike satellite observations (which rely on public funding, as well as funding from the industry) and marine meteorological observations (integrated in the operational, sustained observation programs carried out by the National Meteorological and Hydrological Services), in situ ocean observations are mostly funded by research projects of a limited duration (the longest commitment is typically 5 years), with serious risks for the continuity of the time series.