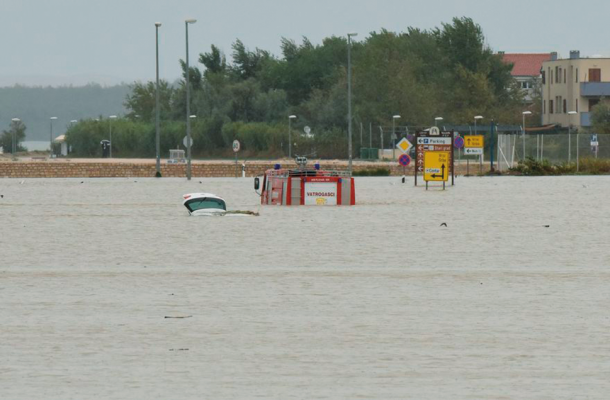 It is important to note that in all instances, forecaster evaluation of FFGS output products is required prior to issuance of any early warnings that may potentially affect life and property. Therefore, the systems were designed and developed for interactive use by meteorological and hydrologic forecasters throughout the world, to provide real-time informational guidance products pertaining to the threat of small-scale flash flooding throughout a region. They provide the necessary products to support development of warnings for flash floods from rainfall events through use of satellite-based rainfall estimates and hydrologic models.

A memorandum of understanding between WMO and the United States America (US) – specifically USAID[1], NOAA[2] and the HRC[3] – supports this cooperative initiative to implement FFGSs worldwide. The FFGS programme is a public benefit effort on behalf of its partners.

Croatia is located in south-east Europe along the Adriatic Sea. It is not a large country (56 594 km²), but its topography is impressive as it adjoins several large European relief forms. The three main ones are lowland Pannonian, mountainous Dinaric, and the Adriatic Sea with more than a thousand islands and islets. Because of its steep mountains and hilly areas with cascades and torrents as well as its wide valleys of lowland watercourses, the country and its numerous valuable assets are vulnerable to floods and flash floods.

This case study examines an event that took place on 11 September 2017 in the cities of Zadar and Nin when about 190 mm of rain fell in less than 2 hours, damaging property and leaving the two communities in difficulty.

Weather situation: A low surface pressure above Scandinavia was stretching its frontal system over western Europe. During the night of 9–10 September, a secondary low formed in the Gulf of Genoa and remained quasi-stationary over the Tyrrhenian Sea for most of the day. In the upper levels of the atmosphere, a deep trough with a cut-off low was visible at 500 hPa and 300 hPa, with a left jet stream exit region entering into the Adriatic. The trough axis extended from north to south and changed its direction to a NW–SE orientation.

The upper level trough was also visible at 850 hPa. On its leading side, a strong south-westerly flow brought warm, moist and unstable air towards Croatia. This flow, together with wind shear, caused intense convective processes on 11 September. The potential energy available and shear (between 0 and 6 km) showed mostly a moderate possibility for intense convection.

The airmass red–green–blue (RGB) composite image (below) from Meteosat 9 showed a mesoscale convective system over Croatia with a horizontal dimension greater than 400 km. It defined weather conditions not only on the Adriatic coast, but also in the inland mountainous and central regions of Croatia. The highest cloud top temperature was about −65 °C. This indicated deep moist convection and strong updrafts that brought water droplets to very high altitudes (about 12 km over the Zadar region).

Conclusions: On 11 September, stationary convective activity persisted over the cities of Zadar and Nin for several hours. This resulted in devastating flash flood events with extensive material damage, but without loss of human life. Out of the 276 mm of rainfall recorded by the Zemunik Meteorological Station, 265 mm fell in only 6 hours. Similarly, the Zadar Station measured 213 mm in 24 hours, while 188 mm was recorded in 6 hours.

The effects of the flash flood events could have been even worse, but they were well forecasted, and warnings were issued in advance. The National Meteorological and Hydrological Service issued several flash flood warnings to the National Protection and Rescue Directorate and also via Meteoalarm to the public and media. The SEEFFG system was very precise, showing the exact locations of flash floods.

The hydrologic response of the small torrential streams to large precipitation amounts was very quick due to high soil saturation. Because flash floods mostly occur in urban areas, it is important to note that urbanization can have a significant effect on surface-runoff patterns. The flash flood warning verification in Croatia revealed that the probability of occurrence of urban flash floods in its coastal region has increased appreciably in recent years. This makes flash flood forecasting not only more important, but also more challenging. Other countries that are using FFGSs should be advised to collect flash flood reports as much as possible. They should also conduct verification studies that can help to understand uncertainties in forecasting models and ways in which they could be improved.

The experience in operational work with the SEEFFG system proved valuable for disseminating warnings in Croatia. It also highlighted the potential for enhanced collaboration with response agencies in disaster risk reduction and for raising community awareness. As time is the most critical factor, collaboration and involvement is necessary for effective “end-to-end” flash flood and flood forecasting early warning systems.

Zimbabwe is a landlocked country, covering an area of 390 754 km2, in southern Africa. It is geographically divided into 10 provinces. South Africa bounds the country to the south, Zambia edges it to the north-west, Botswana borders it to the south-west and Mozambique edges it to the east. The country spans a large and elevated inland terrain that decreases in elevation to the north towards the Zambezi basin. This is the area where Zambia shares the boundary with Zimbabwe. The terrain elevations also decrease in the south towards the Limpopo River basin and the border with South Africa. 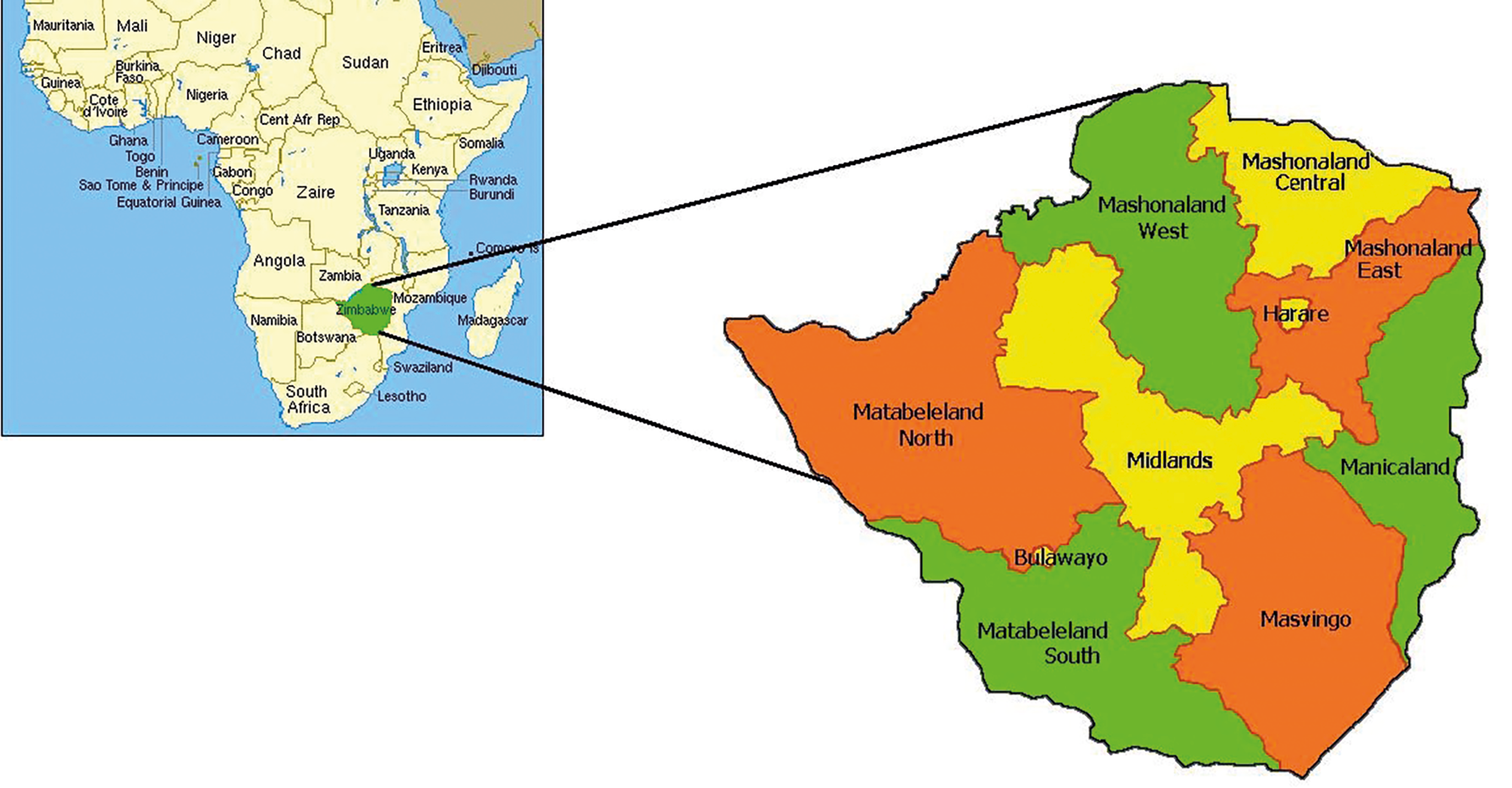 The Zimbabwe Meteorological Services Department has the national mandate of saving human life and property, which includes providing warnings for flash floods.

This case study focuses on a flash flood incident that occurred on 14 November 2016 in regions situated south of Manicaland province. It examines how the SARFFG system depicted regions of intense heavy rainfall as well as regions of saturated soils.

Weather situation: In the week that preceded the incident, there had been widespread rainfall activity over the country, with parts of Manicaland, Mashonaland East, Mashonaland West, Matabeleland South and eastern Midlands experiencing heavy precipitation. The automatic weather systems in the regions were down during this period. Such systems are important as they provide the time or rate of the greatest precipitation intensity and would have been very helpful for use in this study had they been available.

Significant rainfall totals reported in a 24-hour period were at Harare Airport (67 mm) and Mvuma (64 mm), on 11 November. Mukandi also had a significant precipitation total of 64 mm reported on 14 November.

It was deduced from weather charts that there was a trough situated in the Indian Ocean and extending inland onto Mozambique and Zimbabwe. As the region of flash flooding has a high relief and there was a lot of moisture as a result of the rains that had been received prior to this event, coupled with high temperatures, there was a good chance that the resulting thunderstorm activity could be due to a combination of all these factors. This thunderstorm activity was responsible for hail, which was reported in parts of these flash flood regions.

SARFFG system analysis: To gain a good understanding of the rainfall distribution since the start of the wet season, accumulated rainfall totals over the country were studied. This suggested that relative to other regions of the country, the regions that received the highest precipitation totals were likely to have had high levels of soil moisture. This result was supported by the SARFFG average soil moisture product, which demonstrated that some basins in the country, where incidences of flash flooding were reported, had upper soil saturation fractions of at least 75% (as a result of the accumulated precipitation noted previously).

The SARFFG product showed that at 1200 UTC, the eastern parts of the country only needed precipitation amounts in excess of 30 mm within the next 6 hours to reach bankfull. It was during this period that significant amounts of precipitation fell in these regions and flash flooding occurred.

Conclusion: As a result of its ability to predict (with reasonable accuracy) regions likely to be affected by flash floods, the SARFFG system is a useful tool to help the Zimbabwe Meteorological Services Department to meet its national mandate of saving human life and property.

Both studies show that FFGS builds capacity and results in effective early warnings for flash floods. The National Meteorological Services of other countries could use the FFGS. The FFGS partners – WMO, USAID, NOAA and HRC – aim to broaden its implementation worldwide.

[1]       US Agency for International Development

[2]       US National Oceanic and Atmospheric Administration