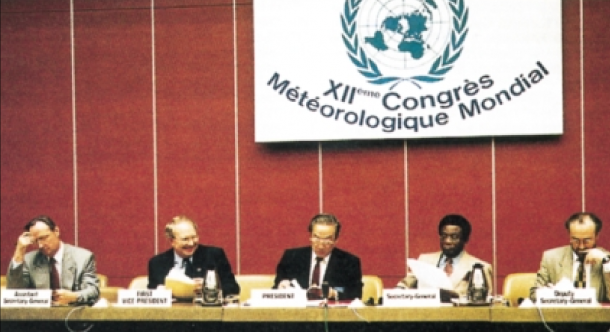 The adoption of Resolution 40, WMO Policy and Practice for the Exchange of Meteorological and Related Data and Products including Guidelines on Relationships in Commercial Meteorological Activities, by the Twelfth World Meteorological Congress in 1995 (Bautista Pérez, 1996) remains a watershed event in the history of WMO. In some respects, it marked the end of what has been called the golden age of international cooperation in meteorology. That period extended from the early nineteenth century (Daniel, 1973) to the origin of the International Meteorological Organization (1873) and its successor WMO (1950), and the remarkable achievements of the WMO World Weather Watch (WWW) and the Global Atmospheric Research Programme (GARP) from the 1960s through to the 1980s (Davies, 1990).

By the mid-1980s, the century-long tradition of universal international cooperation and data exchange was coming under severe pressure. Governments in several parts of the world sought to implement market mechanisms for the provision of many public services that had previously been provided by the public sector. The application of the new commercial approach to the work of government-funded National Meteorological Services (NMSs) soon led to competition and conflict among previously closely cooperating NMSs, and tensions among formerly complementary public, private and academic sectors. Most seriously of all for meteorological service provision at the national level, it led to various kinds of restrictions on the free exchange of observational data and products among WMO Members. By the early 1990s, international meteorological cooperation was in crisis, and WMO was on the verge of an international data war (Zillman, 1997).

The Eleventh Congress in 1991 and sessions of the WMO Executive Council in the early 1990s attempted to find a solution through the introduction of new concepts such as “basic” and “special” meteorological services. However, deep divisions opened up within the Executive Council. Some Members supported the maintenance of free exchange while others favoured, or saw no politically viable way of averting, the commodification of meteorological data and the wholesale commercialization of meteorological service provision. An Executive Council Working Group struggled to achieve sufficient consensus on a way ahead to present the 1995 Congress with a policy framework for averting the feared global data war. It came up with a range of possible compromises, but none could bridge the deepening philosophical gulf within the WMO community.

When the Twelfth Congress opened on 30 May 1995, the data exchange issue was almost immediately passed to an offline open subgroup. This group worked late into the night for the first few weeks of the Congress to attempt to reach consensus on the essential elements of a solution. The basic principles and details in the wording of possible Congress resolutions were hugely sensitive for some countries. Most Permanent Representatives carefully considered how the wording in each proposal would affect their own NMSs in ongoing conflicts over data exchange with their neighbouring NMSs or with their domestic private or academic sectors. At one stage, it seemed likely that the debates and negotiations would run out of time and that the Twelfth Congress would witness the end of the free and unrestricted international data exchange that had underpinned global cooperation and national meteorological service provision for more than a century.

Eventually, with time and delegations’ stamina running out, the group drew together a single draft resolution on policy and practice, supported by four annexes, into a “Pink” document (remembered by those who were there as “Pink 64”) to go straight through the group’s parent Working Committee without discussion for direct consideration by Plenary. When Pink 64 came up for discussion in the Plenary on the afternoon of 21 June under President Zou Jingmeng, the atmosphere was electric. When the President invited interventions, everyone looked around to see which delegation would ask for the floor to shatter the fragile consensus on the draft resolution – none did. Then, just as the President brought down the gavel to declare the resolution adopted, and delegates rose in standing ovation, New Zealand (Dr Neil Gordon) asked for the floor, but it was too late. When the applause eventually subsided, Dr Gordon spoke, not to challenge the resolution or puncture the euphoria of its adoption, but to engage in the whimsical award of bottles of New Zealand wine to several of the principal protagonists in the preceding years of divisive debate.

The sense of relief across the assembled WMO community was immense. Without really understanding all the implications of what they had adopted, the Congress recognized that the international meteorological community was again united and that it had re-established “free and unrestricted international exchange” as the fundamental policy foundation for international cooperation through WMO. At social events that evening, everyone agreed that WMO must never again allow itself to get so near to collapse.

Resolution 40 consisted of two pages of text and three pages of annexes. Its core was an unambiguous reaffirmation of free and unrestricted international exchange as a fundamental principle of WMO coupled with a new distinction between what would become known as “essential” and “additional” data and products. The statement of policy read: “As a fundamental principle of the World Meteorological Organization (WMO), and in consonance with the expanding requirements for its scientific and technical expertise, WMO commits itself to broadening and enhancing the free and unrestricted international exchange of meteorological and related data and products.”

The supporting text defined the free and unrestricted concept, and spelled out the critical distinction between essential and additional data in three short statements of how Members should, in practice, deal with various types and categories of data. The annexes provided important, though somewhat ambiguous, guidance on various aspects of commercial relations among NMSs and relations between NMSs and the private sector. Delegations returned to their countries proud that they had saved international cooperation through WMO, but with substantial challenges still facing them in the interpretation and implementation of Resolution 40.

Much of the following decade was taken up with clarifying and bedding down Resolution 40 and gradually extending the basic concept of free and unrestricted exchange to related hydrological and oceanographic data exchange. It also found its way into the design of the Global Climate Observing System and the United Nations Framework Convention on Climate Change, and helped inspire the Geneva Declaration of the Thirteenth Congress in 1999. Later, it helped shape data policies for the Global Earth Observation System of Systems.

Unfortunately, fear of reopening the basic issue of free exchange dissuaded many of those who had been deeply involved in 1995 from attempting to build the essence of Resolution 40 into the WMO Convention. Then, as international cooperation gradually returned to something approaching the stability of its golden years (Zillman, 2018), the Resolution 40 generation gradually faded from the scene and the traumas of the 1990s were largely forgotten.

Now, with new tensions emerging over international data exchange (Blum, 2019) and a new Geneva Declaration from the Eighteenth Congress in 2019 calling for new initiatives to strengthen the global meteorological community, it seems timely to revisit some of the issues addressed and lessons learned from the Resolution 40 experience.

As one of the survivors of the traumas of those times, I continue to believe that the basic philosophy of Resolution 40 remains central to the effectiveness and stability of the evolving public–private–academic–media partnership on which the integrated global system for provision of weather and climate services in every country depends. I also believe that the uniquely public good character of most essential public forecasting, warning and information services makes the voluntary cooperative provision of the underpinning global meteorological infrastructure a fundamental responsibility of national governments and free and unrestricted international exchange of data and products is a continuing global imperative for meteorology in the twenty-first century.

A more detailed brochure on the Resolution 40 story will be released in 2020.

Bautista Pérez, M., 1996: Resolution 40 (Cg-XII)—WMO policy and practice for the exchange of meteorological and related data and products, including guidelines on relationships in commercial meteorological activities. WMO Bulletin, 45(1):24–29.