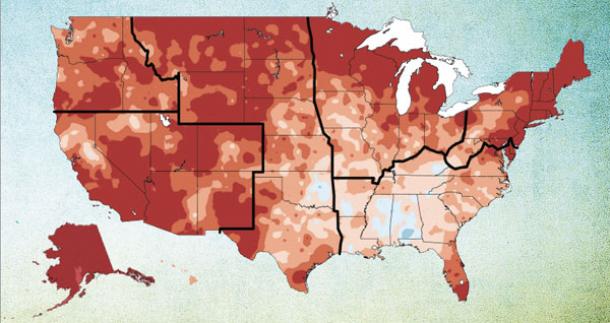 By Audrey Resutek and Erwan Monier, MIT Joint Program on the Science and Policy of Global Change

How severely will climate change affect different regions the United States? It depends on climate policy, says new research by the MIT Joint Program on the Science and Policy of Global Change. 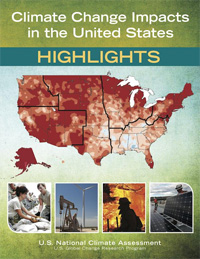 The US National Climate Assessment, released this spring by the White House, describes a troubling array of climate woes, from intense droughts and heat waves to more extreme precipitation and floods, all caused by climate change. The report also describes how climate change is expected to impact regions across the United States in the future, yet it notes that exact regional forecasts are difficult to pin down. At the larger scale, it is clear that climate is changing, but local predictions can disagree on the extent to which temperatures will increase, and what regions will be hit the hardest by precipitation changes.

Researchers at the MIT Joint Program on the Science and Policy of Global Change examined four major factors that contribute to wide-ranging estimates of future regional climate change in the United States, with an eye toward understanding which factors introduced the most uncertainty into simulations of future climate. They find that the biggest source of uncertainty in climate modelling is also the only one that humans have control over – policies that limit greenhouse gas emissions.

In this context, the term “uncertainty” does not mean that there is a lack of scientific consensus that climate is changing. Instead, uncertainty refers to the fact that using different assumptions for the variables that go into a climate model – for example, the amount of greenhouse gases emitted over the next century, or how sensitive the climate is to changes in carbon dioxide levels – will produce a range of estimates. Overall, these estimates indicate that the Earth will be a warmer and wetter place over the coming century, but there is no single universally agreed on amount of climate change that will take place.

In fact, estimates that point to a single number for changes in temperatures and precipitation may be misleading, precisely because they do not capture this uncertainty. It is more useful to think of estimates of future climate change as a range of possible effects. The range of potential warming, for example, follows a bell curve, with the most likely change in temperature falling at the highest point of the curve. The farther you travel from the curve’s peak, toward the tails, the more unlikely the temperature change. While the extreme temperature increases at the curve’s tails are unlikely, they still fall within the realm of possibility, and are worth considering because they represent-worst case scenarios. 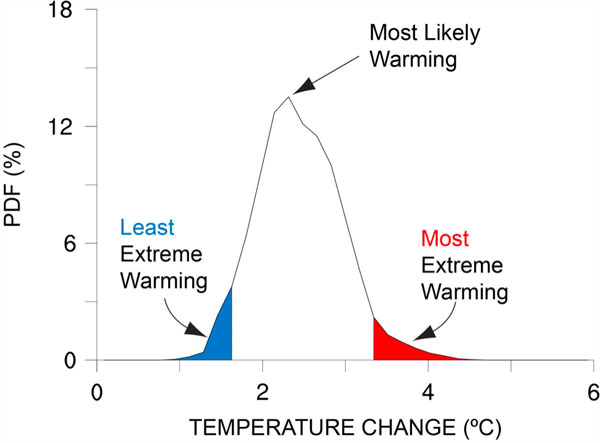 Example of a range of potential change in temperature.

The biggest source of uncertainty

The MIT study1 published this spring in a special edition of Climatic Change, looked at how different sources of uncertainty affect estimates of future regional climate change in the United States – in other words, how do different factors affect the width of the range of estimates? The study concludes that lack of information about future climate policy is the biggest source of uncertainty over the next century for simulations of both temperature and precipitation change. Climate policy introduces uncertainty into the mix when researchers must try to predict what regulations will affect emissions in the future, leading to varying levels of global greenhouse gas emissions.

Not knowing the details of a future emissions policy, including the timing or magnitude of reductions, makes it difficult to estimate climate change – especially in certain regions. For example, the MIT team found that temperature increases in the Pacific Northwest and New England could range from 1°C to 6°C, depending on the policy studied. When climate policy to control greenhouse gas emissions was in place, no region experienced more than 3.5°C warming.

The MIT team used an Integrated Assessment Model, the MIT IGSM2, to study the effects of different climate policies. The Computer Model links a simulation of the global economy with a simulation of Earth’s climate. This makes it possible to study how climate policies affect activities that contribute to greenhouse gas emissions, such as electricity generation, transportation, industry and changing land use. The model then calculates the effect of the resulting changes in emissions on climate.

Such models are particularly useful for studying the effects of climate policy because they use one modelling framework to consistently take into account interactions between the climate and economic factors like population growth, economic development and changes in energy and land use. They can also be used to study the opposite relationship – how changes in climate impact economic activity, including what regions and areas of the economy are most likely to be affected.

The specific polices used in this study were selected based on the researchers’ participation in the Climate Change Impacts and Risk Analysis (CIRA) Project, an effort led by the US Environmental Protection Agency (EPA) to understand the benefits of emissions mitigation. The EPA wanted to know how reducing greenhouse gas emissions would affect climate change impacts and damages in different regions of the country. Would stabilizing emissions produce the largest benefits compared to policy costs? Would a more drastic cut in carbon emissions lead to even bigger benefits, or just increase the costs associated with cutting emissions?

To study the scenarios identified by the EPA, researchers built three emissions scenarios, achieved through different climate policies, into the IGSM. In the first, nothing is done to slow global greenhouse gas emissions. In the second, global emissions are stabilized by enforcing a carbon tax. In the third, even more stringent checks on emissions are in place. The policies used are described in detail in a second article3 published in Climatic Change. The policies were then combined with the other sources of uncertainty to produce over 100 simulations of climate change through 2115. 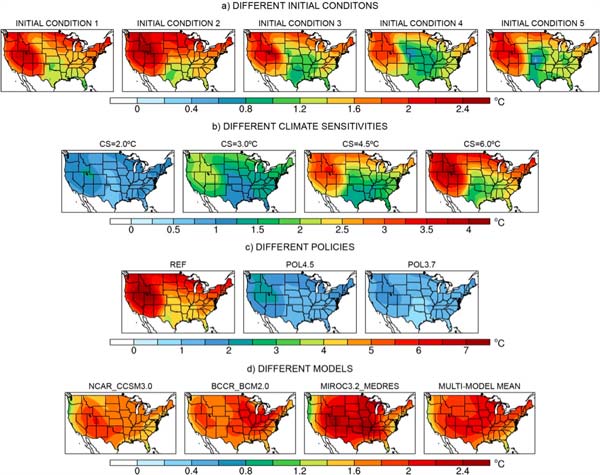 Other sources of uncertainty

Though the choice of climate policy is the biggest source of uncertainty in simulations of climate change by the end of the century, it actually plays a much smaller role in influencing estimates for the immediate future. This is because once they are released into the atmosphere, greenhouse gases stay there for decades or even hundreds of years. So, past emissions continue to influence climate for decades after a climate policy is in place. Because of this lag time other sources of uncertainty, like the climate’s response to changes in greenhouse gases levels (also called climate sensitivity), or the natural variability of the Earth’s climate, introduce more uncertainty into near-term simulations.

Natural variability plays a big role in differing regional simulations of future climate change, at least through 2050. Basically, the Earth’s climate is a complex system made up of many related processes – some of which, like circulation of currents in the deep ocean, take thousands of years to run from start to finish. On top of this, climate naturally varies from year-to-year, so it is normal for some years to be exceptionally hot or cold.

Climate processes and natural year-to-year variability are chaotic by nature and difficult to predict, complicating the process of climate modelling. Small errors in the initial conditions used in a simulation, such as temperatures, humidity or wind, can result in different paths for the entire climate system. This is reminiscent of the fabled butterfly effect analogy – where a butterfly flapping its wings in one part of the globe leads to a hurricane weeks later, thousands of miles away. To work around this problem, climate scientists run the same model with different starting conditions, which helps to identify the natural variability in the climate system and quantify its uncertainty.

Mean range of temperature change over time. Lines represent how large the range in estimates of change is for each source of uncertainty. Lines show averages of two different modelling methods used to create regional forecasts.

Using different starting conditions leads to surprisingly different regional simulations, especially when it comes to regional patterns of precipitation, the MIT study found. It can even cause conflicting projections about whether a region will become wetter, or drier. For example, in the Pacific Northwest two of the five starting conditions the researchers studied resulted in simulations of a much drier climate by 2100; two in somewhat drier climate for the area; and one actually led to an increase in precipitation.

The estimates of regional climate change in the United States varied according to the specifics of each scenario, but a clear pattern emerged: the population can expect more intense and frequent hot days and heavy precipitation. Just how hot and wet depends more on what climate policy is in place than any other source of uncertainty. Accompanying the findings on extreme heat, researchers found that extremely cold days will decrease. As a result, it’s likely that more areas of the country will remain frost-free year-round.

While these patterns did differ from region to region based on the representation of natural variability and climate sensitivity, policy again emerged as the driver of the largest differences in estimates of regional climate change. These findings show that none of the sources of uncertainty related to specific aspects of climate modelling has a bigger effect on simulations than the actual amount of emissions humans generate over the next century. This underscores how important it is, if we want to avoid the worst effects of climate change, to implement a global policy aimed at stabilizing greenhouse gas concentrations in the atmosphere.