The Polar Challenge: Pushing the Boundaries of Observations for Climate Research and Services 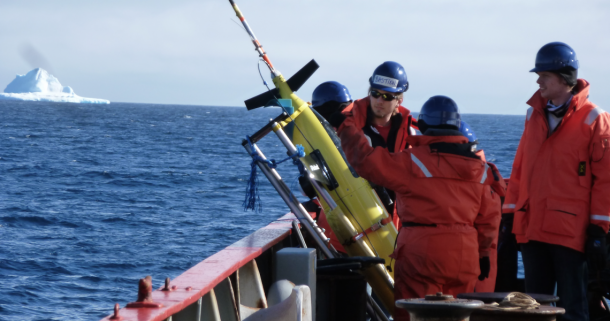 The Polar Challenge: Pushing the Boundaries of Observations for Climate Research and Services

The cryosphere is a major indicator of global climate change and plays a fundamental role in the climate system. Despite advances in numerical modelling, the reliability of long-term climate change predictions in the Arctic and Antarctic are severely limited by the lack of systematic in situ observations of and beneath the sea ice. For this reason, the World Climate Research Programme (WCRP) and the Prince Albert II of Monaco Foundation are sponsoring a Polar Challenge that will reward the first team to complete a 2 000 km mission with an Autonomous Underwater Vehicle (AUV) under the Arctic or Antarctic sea ice. Bonus awards will go to the team that has taken regular measurements of sea ice thickness and to those who successfully transmit their under-ice position and environmental data to operational networks.

In situ ocean observation networks in the polar regions are sparse and conducting such observations is inherently expensive and risky, even more so under the sea ice. A new paradigm is required to complement remotely sensed Earth observations. WCRP and the Foundation promote AUV technology for under ice observations due to its potential scalability, limited risks and cost-effectiveness.

The challenges of under-ice observations

Different types of AUVs are already operating in ice-free zones around the world, surfacing regularly to obtain a GPS (Global Positioning System) fix and to transmit near real-time environmental data. They are able to collect high-quality oceanographic observations – temperature, salinity, chlorophyll concentration, pH levels and more – at a much lower cost compared to ship-based and other conventional observing systems. Operating range, positioning and data transmission represent major challenges for AUVs under sea ice, but the integration of some recent innovations – for example in power systems, navigation and communication techniques – could expand the range of their application.

WCRP and the Prince Albert II of Monaco Foundation aim to stimulate AUV technological innovation in order to build a cost-effective and scalable observing network for regions covered by sea-ice. The goal is to achieve what ARGO has accomplished for the open ocean.

Registration for the Polar Challenge competition will open at the beginning of 2016 when the details of the prize will be announced and the competition itself will start. Competitors are responsible for mobilizing their own resources for attempting the Challenge. The prize will represent a significant incentive for teams with adequate capabilities to attempt the Challenge missions, taking into account the costs of engineering developments, operations and the AUV itself.

Detailed rules of the Challenge are currently being developed. Subject to further refinements, however, they are as follows:

All competitors will have to demonstrate that they made best efforts to minimize environmental impacts. The full science data sets will have to meet expected quality standards and be made freely available to the scientific community. Completion of the missions is subject to final validation by the Challenge Committee. Challengers will retain the intellectual property rights to the knowledge that they have developed in the framework of the challenge.

Some competitors may decide to leverage in situ field experiments planned within the “Year of Polar Prediction” from 2017-2019 (see http://www.polarprediction. net/yopp.html), but other options could be considered at their own discretion.

This initiative is co-sponsored by the European Space Agency (ESA), the Global Climate Observing System (GCOS), the Group on Earth Observations (GEO), the Intergovernmental Oceanographic Commission (IOC) of UNESCO and the Scientific Committee on Oceanic Research (SCOR) and endorsed by the International Arctic Science Committee (IASC), the Scientific Committee on Antarctic Research (SCAR) and WMO. It is aligned with WCRP research priorities, in particular the Grand Challenge on Melting Ice and Global Consequences, and the Grand Challenge on Regional Sea Level Rise. It contributes to WMO polar initiatives such as the Global Cryosphere Watch (GCW) and the Global Integrated Polar Prediction System (GIPPS) and the Global Framework for Climate Services (GFCS).

If successful, this initiative will make a tremendous impact by shaping climate research in the polar regions. New collocated multidisciplinary data sets of sea ice and under-ice properties at unprecedented temporal and spatial resolution far into unexplored territories could revolutionize our knowledge of climate change, for example, in the areas of heat fluxes and storage, fresh water exchanges, carbon sequestration and ocean acidification, in those regions.

Once the concept is proven, it could be scaled up into a game-changing ocean monitoring network for the poles with wide-ranging benefits for climate research and services as well as for other sectors such as environmental protection, weather forecast, tourism, safety, security, transport, energy, biodiversity, fisheries and insurance.

Additional contributions from the public and private sector are most welcome to support this effort and to complement the Prize money award. For more information, please visit www.wcrp-climate.org/polarchallenge) or contact us at polarchallenge@wcrp-climate.org. 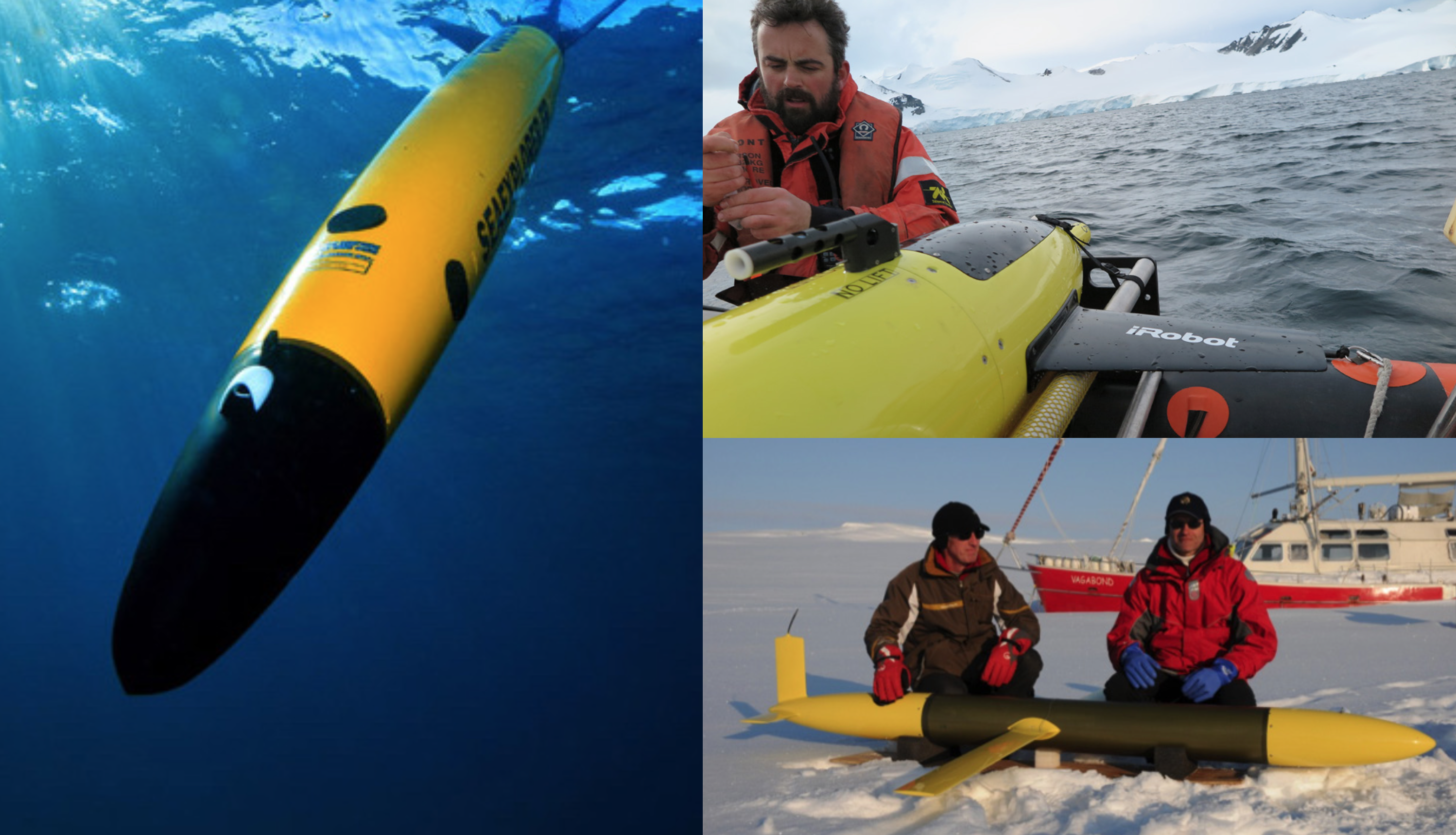 The Polar Challenge does not impose restrictions on the type of autonomous underwater vehicle (AUV), as long as it complies with the Challenge rules – in particular, autonomous operation and navigation. However, its ambitious objectives narrow down the range of candidate AUV types.

The class of AUV that quite naturally lends itself to the Challenge is the underwater glider. Such AUVs can effect gentle changes in their own buoyancy and orientation (attitude), which permit them to move forward when not in neutral buoyancy. Thus, they can traverse oceans in sawtooth-like patterns from the surface down to 1 500 metres and beyond with minimal energy requirements.

The idea of operating fleets of underwater gliders to conduct ocean measurements at a global scale was widely disseminated through a visionary article by H. Stommel in 1989. Today, several different designs and vendors exist, and glider missions have become standard elements of ocean research portfolios around the globe. Common to all glider types are the core functional elements of buoyancy modification, methods for pitch and roll modification, GPS and satellite data transceiver (active when surfacing), dead-reckoning equipment and data storage (active during dives), plus payload sections for scientific sensors.

Notable recent landmarks in glider development and deployment include the first transatlantic crossing (7 400 km in 221 days) in 2009; and the introduction of thermally-powered gliders, which use ocean temperature changes, instead of battery power, to control buoyancy and minimize energy requirements. For the upcoming Polar Challenge, competing teams will need to implement technological innovations for GPS-less under-ice navigation during potentially the entire mission. This constitutes a major scenario change from open-ocean glider operations, where GPS fixes at the surface can correct dead-reckoning estimates at regular intervals. For the Challenge's two bonus demonstrations, novel

setups of measurement and communication technology will be required as well. Successful approaches to these technological challenges will be invaluable steps for making autonomous glider fleets truly global.