Progress in Observing and Predicting ENSO 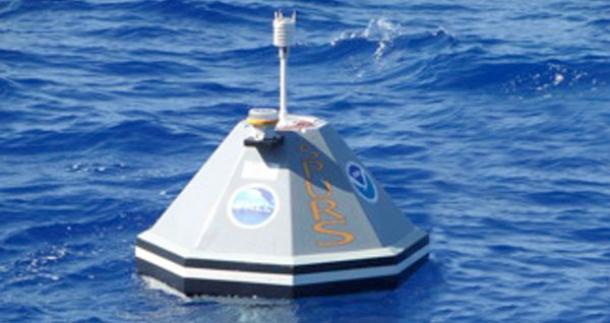 Progress in Observing and Predicting ENSO

Governments, private companies and individuals are demanding ever more sophisticated climate services, as manifested by the Global Framework for Climate Services (GFCS). But parts of the ocean observation network – paramount to the delivery of climate services – are at risk, and the evolution of climate prediction systems is not keeping pace in terms of accuracy and reliability.

We are at a critical stage in observing and predicting the El Niño-Southern Oscillation (ENSO). This presents an opportunity for scientists, technological experts, engineers, and operational climate services to re-engage and achieve major change, change that will have profound benefits for WMO and the GFCS.

ENSO: A problem worth solving

ENSO refers to the alternation between the El Niño climate phase in the tropical Pacific Ocean and its opposite phase, La Niña. The Southern Oscillation index captures the east-west surface atmospheric pressure differences that accompany these changes. ENSO is accompanied by changes in ocean temperature and a dislocation of atmospheric circulation, some aspects of which are believed to be predictable. That means that given observations of the climate state, in particular for the tropical Pacific Ocean, and models that encapsulate our understanding of climate variability, we can then predict ENSO conditions with some skill and provide outlooks for air temperatures or rainfall in other regions.

Understanding and forecasting the onset and duration of the phases of ENSO has provided a basis for routine delivery of seasonal climate outlooks and associated information and services for regions impacted by ENSO. While the predictability of ENSO has strong scientific foundations, the prediction of its global impacts is significantly more challenging since those often occur on regional scales and may be influenced by regional and/or local effects.

ENSO remains a problem worth solving – there are few if any natural semi-regular climate signals whose prediction can have such widespread impact – but we are not there yet. We continue to be surprised by the diversity of ENSO events. Regular oscillations in the 1960s and 1970s shaped early understanding of ENSO. The 1980s and 1990s were dominated by El Niño phases – including the large 1982/83 and 1997/98 events. The recent period has been accompanied by changes in the mean state, reduced variability and the so-called “Modoki” El Niño. 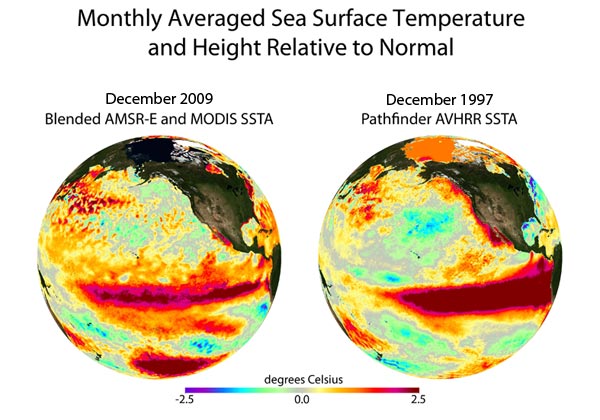 Anomaly during an Eastern Pacific versus a Central Pacific El Niño

From 1985 through to 1994, a major international project, the Tropical Oceans-Global Atmosphere (TOGA) Experiment, established an observing system. The primary rationale was to enable the prediction of large-scale interannual climate fluctuations, in particular El Niño and its global effects. The Pacific component of the TOGA observing system, completed in 1994, is now known as the Tropical Pacific Observing System (TPOS) and continues to support routine forecasting systems and research.

Corresponding networks were developed in the tropical Atlantic and Indian Oceans during and after TOGA, contributing to seasonal forecasts and to improved knowledge of climate variability in these regions.

Over the 20 years since TOGA, new in situ and satellite observational technologies have been added to the TPOS, and a profound evolution has taken place in the sophistication of analysis, modelling and predictions systems. Moreover, the understanding of Tropical Pacific variability and predictability has advanced to the point where a fresh articulation of observational requirements and system design is needed.

Uncertainty about recent ENSO events, as in 2014, occurs in the context of substantial changes in the entire Pacific Ocean and throughout the northern  hemisphere. By March 2014, several operational centres predicted an El Niño to rival the 1982/83 and 1997/98 events based on a range of forecast models that had hitherto demonstrated skill. By mid-year, it was clear that such a large event would not happen. Instead, the tropical Pacific sea-surface temperature anomaly followed a much cooler trajectory, though still positive. Meanwhile, substantial sea-surface warming occurred over a large area of the North Pacific, accompanied by, but perhaps only coincidently, large anomalies of northern hemisphere circulation. Do these hemispheric and ocean-wide patterns fit together, and how do they affect ENSO? Perplexed by the apparent failures of ENSO forecasts in 2012 and again in 2014, several researchers ask whether changes in ENSO reflect larger shifts or changes in the planet-wide climate system.

A number of models continue to raise the possibility of a small-to-modest warm event beyond May – around 50-60% as of February 2015. It remains unclear whether the weaknesses of present prediction systems derive from fundamental model deficiencies or from missing observations of key ocean variables. It is also possible that the forecast systems were simply unlucky – most forecast models had some ensemble members that were close to the observed trajectory.

Birth of the TPOS 2020 Project

The deterioration of some of the TOGA-based elements of the network in recent years – and with it the associated international collaboration – highlights the risks to a system that underlies the capability for seasonal forecasting around the globe, requiring a renewed international effort to evaluate and redesign the system. This effort is challenged to first consider the underpinning scientific understanding and rationale for the TPOS and its implications for a more modern consideration of requirements, observing techniques and data products. Second, we must forge a fresh international agreement, not only on the form of a rebuilt system, but also on developing the governance structures required to ensure an efficient, effective and sustainable observing network for the next decade and beyond. 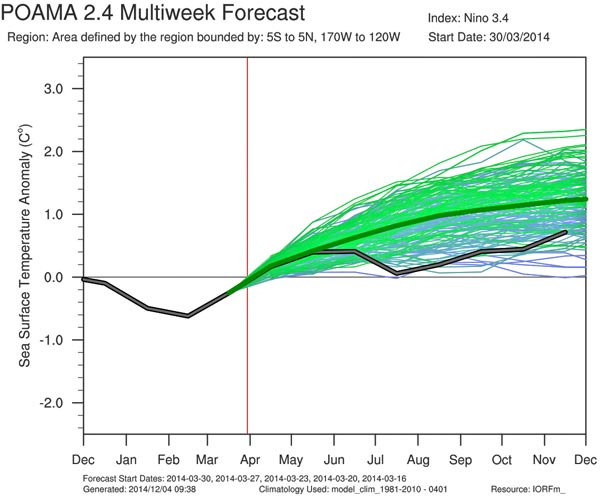 In January 2014, the National Oceanic and Atmospheric Administration (NOAA) of the United States of America and the Japanese Agency for Marine-Earth Science and Technology (JAMSTEC), in collaboration with the Ocean Observations Panel for Climate (OOPC), convened a review of the TPOS through a workshop and associated white papers. These deliberations considered immediate actions to address the deterioration in the observing system as well as those that would be required to create a more robust and sustainable system. Together, these formed the basis of the goals for the TPOS 2020 Project.

A 15-member TPOS 2020 Steering Committee met for the first time in October 2014 to re-affirm those goals and plan Project steps. It agreed to create Task Teams to support the activities needed, including:

The TPOS 2020 sustained sampling network is the “backbone” of the system. This term is used to emphasize that the backbone anchors and underlies all other pieces of the observing system, some of which may only be implemented for a limited time. The backbone will be designed to maintain consistent and well-understood sampling rates and scales that allow for the detection of climate variability and climate trends.

Since much of the use and benefit of TPOS data products will be achieved through model assimilation and syntheses, the model and data assimilation development community and operational modelling centres must be considered key partners. TPOS 2020 efforts, including embedded process studies, will be designed to address phenomena related to systematic errors in models or to situations where detailed observations are needed to guide model design. The initial meeting of the Steering Committee highlighted approaches for greater involvement of modelling centres in the development of process studies to better answer these questions. Among potential studies will be those geared toward a greater understanding of the relationship between ocean near-surface conditions and convective rainfall in the tropics and of the mechanisms that communicate surface fluxes into the subsurface ocean.

The initial TPOS Review, and subsequent in-depth discussions at the TPOS 2020 meeting, resulted in a number of recommendations that will define the approach to the six-year project. Beyond the matters already highlighted above, these include:

TPOS 2020 must be managed and implemented within the context of existing and planned ocean observation activities, in particular the Global Ocean Observing System, the Global Climate Observing System (GCOS) and the WMO/IOC Joint Technical Commission for Oceanography and Marine Meteorology (JCOMM), which coordinated the implementation of many of the oceanographic community’s existing networks.

Other critical partners include the World Climate Research Programme (WCRP) core project Climate and Ocean: Variability, Predictability and Change (CLIVAR) as well as the Global Ocean Data Assimilation Experiment (GODAE) OceanView.  WCRP supports a number of research activities and projects relevant to TPOS 2020, particularly with respect to modelling and process studies. The work of GODAE OceanView is relevant to the planned ocean prediction and observing system studies of TPOS 2020.

TPOS 2020 is a project for change. It will operate independently and work through its sponsors to ensure all dependencies and links are appropriately managed. As such, four primary elements are included in the governance of the Project:

It is through these partnerships and governance structure that TPOS 2020 will design a modern, sustained tropical Pacific observing system that meets both the scientific and societal needs of the future.

It is worth repeating: We are at a critical stage in observing and predicting ENSO. In order for the GFCS and WMO to respond to the increasing demand for more sophisticated climate services, we need accurate and reliable observations and climate prediction models. Technology has much to contribute – the next decade promises exciting advances in the technology, autonomy and platforms that the observing and prediction community may be able to take advantage of. Scientists, experts and engineers need to seize the opportunity to improve and make more efficient observations and models and to propose novel approaches to the challenges of observing ENSO.

“The overall warming trend is more important than the ranking of an individual year,” said WMO Secretary-General Michel Jarraud. “Analysis of the datasets indicates that 2014 was nominally the warmest on record, although there is very little difference between the three hottest years,” he continued. “Fourteen of the fifteen hottest years have all been this century. We expect global warming to continue, given that rising levels of greenhouse gases in the atmosphere and the increasing heat content of the oceans are committing us to a warmer future.”

Around 93% of the excess energy trapped in the atmosphere by greenhouse gases from fossil fuels and other human activities ends up in the oceans. Therefore, the heat content of the oceans is key to understanding the climate system. Global sea-surface temperatures reached record levels in 2014. However, it is notable that the high 2014 temperatures occurred in the absence of a fully developed El Niño, which has an overall warming impact on the climate.

“In 2014, record-breaking heat combined with torrential rainfall and floods in many countries and drought in some others – consistent with the expectation of a changing climate,” said Mr Jarraud.

The WMO analysis is based, amongst others, on three complementary datasets maintained by the Hadley Centre of the Met Office  and the Climatic Research Unit, University of East Anglia, United Kingdom (combined); the U.S. National Oceanic and Atmospheric Administration (NOAA) National Climatic Data Centre; and the Goddard Institute of Space Studies (GISS), operated by the National Aeronautics and Space Administration (NASA).