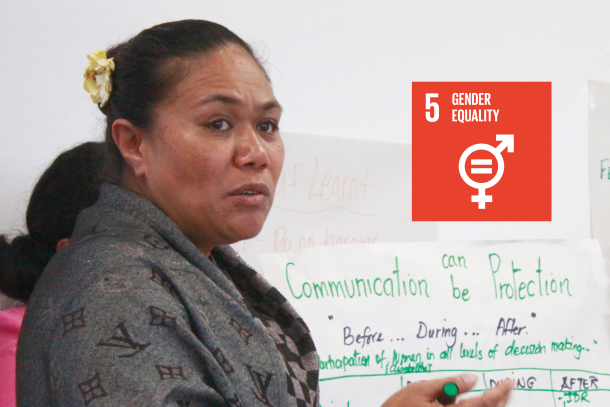 The Sustainable Development Goals will shape the international development agenda and transform the course of the 21st century through action to end poverty, inequality and violence, particularly against women. Achieving gender parity and women’s leadership are indisputable prerequisites for addressing these global challenges. The standalone Goal 5 on Gender Equality and Women’s Empowerment was conceived to focus attention on, and accelerate efforts to achieve, gender parity and many other SDGs by 2030.

Women have a right to equality in all areas. The principle of equality must be embedded across institutional processes and legal systems and upheld in both laws and legal practices. Law and policy play an important role in addressing gender inequality and preventing gender discrimination and Sexual and Gender-Based Violence (SGBV) in disasters. All efforts must be made to cut the roots of gender discrimination wherever they appear and to allow for equal opportunities for all women and girls, notably in terms of accessing information, job opportunities, funding mechanisms and influencing decision-making.

Women are still too often absent from the development of disaster risk reduction strategies and decision-making processes. When present, their voices are seldom heard. The fact that women are often under-represented in politics is a clear indication of their absence in the development of national priorities, including those related to disaster risk reduction and climate change adaptation. Only 22.8% of all national parliamentarians were women as of June 2016, a slow increase from 11.3% in 1995.[1] The SDGs offer the opportunity to galvanize the support needed to finally achieve women’s full, equal and meaningful participation in public and political affairs.

The Sendai Framework for Disaster Risk Reduction 2015-2030 supports an inclusive approach to disaster risk reduction. It recognizes the indispensable role of women in risk reduction efforts. The Framework emphasizes both their distinct gender-specific capacities to prevent, prepare, confront, and recover from disasters and their vulnerabilities. Promoting and mobilizing women’s leadership and gender equality in building resilience is critical to the sustainability and achievement of risk-reduction priorities and sustainable development goals at all levels. Gender equality in the context of disaster risk reduction is thus not only an issue of rights, but also an issue of effectiveness.

Consistent advocacy over the past years has resulted in significant progress in recognizing the need for gender equality and parity and in empowering and acknowledging women’s and girls’ role and leadership in disaster risk reduction.  Good examples include Vietnam, where the contribution of women has been recognized through a Government decree that gives the Women’s Union an official space in decision-making bodies. Lives were saved in the 2013 storm season by involving women in disaster planning and the identification of dangerous areas through local flood risk mapping. Mothers also received swimming classes that allowed them to teach their children and community members how to swim during floods.

In Nepal in 2016, over 100 women from 14 earthquake-affected districts jointly issued a 15-point Kathmandu Declaration that calls for a gender-responsive reconstruction approach. It includes programmes that offer economic empowerment opportunities to women affected by the earthquake, a special package for women with disabilities and those from marginalized communities, and a 50% representation of women in the National Authority.

In the Philippines, the National Disaster Risk Reduction and Management Act of 2010 emphasizes a whole-of-society approach to all aspects of disaster risk reduction, including decision-making. It outlines climate change measures that are gender-responsive and sensitive to indigenous knowledge.

At the global level, the discussions of the Open-Ended Intergovernmental Working Group (OEIWG) on Indicators and Terminology relating to disaster risk reduction (November 2016) resulted in concrete recommendations to member states to strengthen the collection of data on disaster loss, disaggregated by income, sex, age and disability. It also recommended that countries start reporting on these disaggregated data. This is a major step forward.

The 2017 Global Platform for Disaster Risk Reduction[2] provided policy and implementation guidance to facilitate gender integration as part of national and local disaster risk reduction policies and plans by 2020 (Target E of the Sendai Framework). It called for enhanced and sustained efforts in women’s empowerment and leadership in disaster risk reduction, to be supported, reviewed and monitored. Guidelines currently under development will integrate strong recommendations for member states to monitor progress on gender achievements. They will also foster reporting based on sex-disaggregated data.

Significant efforts were made over the past few years to increase gender parity in international conferences. Figures show an overall increase in women’s participation in substantive discussions from 31.7% at the Third World Conference on Disaster Risk Reduction (March 2015, Japan) to 37.2% at the 2017 Global Platform on Disaster Risk Reduction (May 2017, Mexico). A major improvement has also been achieved in fostering women as speakers, with rates passing from 31.2% in 2015 to 40.7% in 2017.

Gender parity and mainstreaming is also recognized as a critical element in technical arenas such as early warning systems and climate risk management. Some operational guidance on gender-sensitive programming for early warnings, for instance, has been developed. The aim is to ensure that the Climate Risk & Early Warning Systems (CREWS) initiative[3], through its investments, contributes to the ability of relevant national and local institutions to provide gender-sensitive early warning systems and climate risk information.

From normative commitments to concrete action

More effort, however, is still required. More predictable resources are needed to bring women’s empowerment, leadership and gender parity up to speed in order to achieve gender parity by 2030. In particular, governments’ commitments and actions must be scaled up without delay to provide adequate capacity building, skills-enhancement opportunities and equitable access to basic education to empower and build all women’s and girls’ skills. This is critical to allow them to take an active and leading role in the design, planning, programming and resourcing of gender-responsive disaster risk reduction strategies, governance and decision-making processes at the national and local levels.

Support must also be provided to governments to systematically collect and report progress using data disaggregated by sex, age and disability. This will make it possible to keep track of women’s needs and achievements in disaster risk reduction. This is critical in order to build inclusive and broader disaster risk management strategies and systems. Without this, women’s challenges and needs will remain ignored and thus unaddressed, and their contribution to making their communities safer and resilient to disasters will remain unleveraged.

There is a vital need to strengthen the operational frameworks and move from normative commitments to concrete action with lasting results for women, men, girls and boys. Innovative partnerships and transformative models that put gender equality and women’s leadership at the center stage are essential to guide and support member states, women activists and other relevant stakeholders in building long-term resilience to disasters.

In this spirit, UNISDR, UN Women and IFRC have jointly launched a Global Programme Towards a Gender-responsive Sendai Framework for Disaster Risk Reduction Implementation: Addressing Gender Inequalities of Risk. This programme will provide an effective mechanism to support countries in operationalizing their gender commitments and accelerating efforts towards a gender-sensitive implementation of the Sendai Framework and the SDGs by 2030. It will address core gender gaps and barriers, advance gender parity and women’s empowerment and secure space for women’s leadership in disaster risk reduction and resilience-building.

[2] More information on CREWS is available at http://www.unisdr.org/we/inform/events/45032