Regional trends in extreme events in the IPCC 2021 report 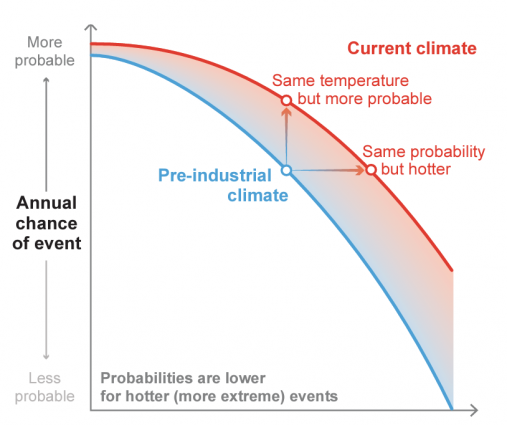 Regional trends in extreme events in the IPCC 2021 report

This summary is based on the Intergovernmental Panel on Climate Change (IPCC) Working Group 1 contribution to the 6th Assessment Report (AR6): “Climate Change 2021: The Physical Science Basis.” Around 1/3 of the report is dedicated to regional climate information, with an assessment of observed and projected changes in climatic impact-drivers which are physical climate system conditions (e.g., means, events, extremes) that affect an element of society or ecosystems. This is the physical science contribution to the assessment of climate-related risks, without anticipating whether their impacts provide potential opportunities or are detrimental (i.e., as for hazards). More detailed information on extreme events in a changing climate is available in the full report, especially in Chapter 11 (Weather and climate extreme events in a changing climate), Chapter 9 (Ocean, cryosphere and sea level change), Chapter 12 (Climate change information for regional impact and for risk assessment), and the Technical Summary as well as in the AR6 online interactive atlas. Syntheses of regional changes are also available in 2-page summaries for large regions (regional fact sheets).

During the last decade, the increase in global surface temperature has reached around 1.1 °C above 1850–1900 level. This observed warming is the best estimate of human caused warming. It is now unequivocal that human influence has warmed the climate system.

The evidence for observed changes and attribution to human influence has strengthened for many types of extreme events since the previous IPCC assessment was published in 2013 (AR5). This is particularly the case for heatwaves, extreme precipitation events, droughts, tropical cyclones, marine heatwaves, extreme sea levels, and compound extremes (Table 1).

Understanding about past and future changes in weather and climate extreme events has increased due to better observation-based datasets, physical understanding of processes, a greater proportion of scientific literature combining different lines of evidence, and improved accessibility to different types of climate models. New techniques and analyses drawing on several lines of evidence have provided heightened confidence when attributing changes in regional extreme events to human influence.

In particular, event attribution is now an important line of evidence for assessing changes in extremes on regional scales. The attribution of extreme events has emerged as an important field for climate research with a growing body of literature. It provides evidence that greenhouse gases and other external forcings have affected individual extreme events by disentangling anthropogenic drivers from natural variability. The regional extreme events that have been studied are geographically uneven. A few events, for example, extreme rainfall events in the United Kingdom, heatwaves in Australia, or Hurricane Harvey that hit Texas in 2017, have been heavily studied. While many highly impactful extreme events have not been studied, particularly in the developing world where event attribution studies are generally lacking for various reasons, including the lack of observational data, of reliable climate models and of scientific capacity. Though the events that have been studied are not representative and results may also be subject to selection bias, the large number of such studies provide evidence that changes in the properties of these local and individual events are in line with expected consequences of human influence on the climate and can be attributed to external drivers.

Some recent hot extremes observed over the past decade would have been extremely unlikely to occur without human influence on the climate system. While cities intensify human-induced warming locally, no-till farming, irrigation and crop expansion have attenuated increases in summer hot extremes in some regions, such as central North America (medium confidence).

Marine heatwaves have approximately doubled in frequency since the 1980s, and since at least 2006 human influence has very likely contributed to most the increasing frequency.

The frequency and intensity of heavy precipitation events have increased since the 1950s over most land areas for which observational data are sufficient for trend analysis (in particular, North America, Europe and Asia), and human-induced climate change is likely the main driver (Figure 2).

Human-induced climate change has contributed to increases in agricultural and ecological droughts in drying regions due to increased land evapotranspiration (Figure 3).

It is likely that the global proportion of major (Category 3–5) tropical cyclone occurrence has increased over the last four decades, and that the latitude where tropical cyclones in the western North Pacific reach their peak intensity has shifted northward. These changes cannot be explained by internal variability alone. Confidence in long-term (multi-decadal to centennial) trends on the frequency of all-category tropical cyclones is low. Event attribution studies and physical understanding indicate that human-induced climate change increases the heavy precipitation associated with tropical cyclones (high confidence) but data limitations inhibit clear detection of past trends on the global scale.

Human influence has likely increased the chance of compound extreme events since the 1950s. This includes increases in the frequency of concurrent heatwaves and droughts on the global scale (high confidence); fire weather in some regions (e.g. southern Europe, northern Eurasia, the USA, Australia); and compound flooding in some locations, including the US coastlines (medium confidence).

Global mean sea level rose around 0.20 metres from 1901 to 2018, and the rate of rising has accelerated since the late 1960s. Regional sea-level change has been the main driver of changes in extreme still water levels across the quasi-global tide gauge network over the twentieth century. High tide flooding events that occurred five times per year during the period 1960–1980 occurred on average more than eight times per year during the period 1995–2014 (high confidence) (Figure 7).

Projected changes in extremes are larger in frequency and intensity with every increment of global warming. Every region will increasingly experience concurrent and multiple changes.

Future emissions cause future additional warming. A level of 1.5 °C of global warming (averaged over 20 years) relative to 1850–1900 is expected to be reached in the near term (2021–2040). If greenhouse gas emissions stay close to current levels for a few more decades, or increase, a level of 2 °C of global warming would be crossed in the mid-term (2041–2060), but reaching such a level of warming could be avoided with rapid and strong reductions in emissions of CO2, methane and other greenhouse gases.

With additional global warming, the frequency of marine heatwaves will continue to rise (high confidence), particularly in the tropical ocean and the Arctic (medium confidence) (Figure 7).

There will be an increasing occurrence of some extreme events unprecedented in the observational record with additional global warming, even at 1.5 °C of global warming. Projected percentage changes in frequency are higher for rarer events (high confidence) (Table 2). Many regions are projected to experience an increase in the probability of compound events with higher global warming (high confidence). In particular, concurrent heatwaves and droughts are likely to become more frequent. Concurrent extremes at multiple locations become more frequent, including in crop producing areas, at 2 °C and above compared to 1.5 °C global warming (high confidence). Some compound extreme events with low likelihood in past and current climate will become more frequent, and there will be a higher likelihood that events with increased intensities, durations and/or spatial extents unprecedented in the observational record will occur. The probability of compound flooding (storm surge, extreme rainfall and/or river flow) will continue to increase due to both sea-level rise and increases in heavy precipitation, including changes in precipitation intensity associated with tropical cyclones (high confidence) (Figure 8).

It is virtually certain that global mean sea level will continue to rise through 2100 and for centuries thereafter, and will remain elevated for thousands of years. The likely range of sea-level rise above 1995–2014 is from 0.15 to 0.30 m by 2050. Sea-level rise by 2100 strongly depends on future emissions, reaching around 0.40 m for very low emissions (global warming close to 1.5 °C), or around 0.8 m for very high emissions (global warming above 4 °C), and 1 m more if ice-sheet instability processes associated with deep uncertainty are triggered.

It is very likely to virtually certain that regional mean relative sea-level rise will continue throughout the twenty-first century, except in a few regions with substantial geologic land uplift rates. Approximately two-thirds of the global coastline has a projected regional relative sea-level rise within ±20% of the global mean increase (medium confidence), with projection data available at https://sealevel. nasa.gov/ipcc-ar6-sea-level-projection-tool. Due to relative sea-level rise, extreme sea-level events that occurred once per century in the recent past are projected to occur 20 to 30 times more frequently by 2050 and 160 to 530 times more frequently by 2100, and at least annually at 20-30% of tide gauge locations by 2050, and at 60 to 80% of all tide gauge locations by 2100 (high confidence). Relative sea-level rise contributes to increases in the frequency and severity of coastal flooding in low-lying areas and to coastal erosion along most sandy coasts (high confidence).

Based on paleoclimate and historical evidence, it is likely that at least one large explosive volcanic eruption would occur during the twenty-first century. Such an eruption would temporarily affect many climatic impact-drivers (medium confidence). Such natural drivers and internal variability will modulate human-caused changes, especially at regional scales and in the near term, with little effect on centennial global warming. These modulations are important to consider in planning for the full range of possible changes.

In the future, unprecedented extremes will occur as the climate continues to warm. Those extremes will be more intense – of greater magnitude – and will occur more frequently than previously experienced. Extreme events may also appear in new locations, at new times of the year, or as unprecedented compound events. Moreover, unprecedented events will become more frequent with higher levels of warming, for example at 3 °C of global warming compared to 2 °C of global warming (Table 2, Figure 9).

In the case of low or very low greenhouse gas emissions, compared to the case of intermediate, high or very high greenhouse gas emissions in the coming decades, changes in climatic impact-drivers would be substantially smaller beyond 2040. By the end of the century, the increase in the frequency of extreme sea-level events, heavy precipitation and pluvial flooding, and exceedances of extreme heat thresholds dangerous for agriculture and health (see Figure 5) and the number of regions where such exceedances occur would be more limited.

This summary highlights the current state of knowledge on specific extreme events, and the importance of preparing for such changes, through the distillation of regional climate information. It is a co-production between scientists, practitioners and users to support adaptation and risk management decisions.