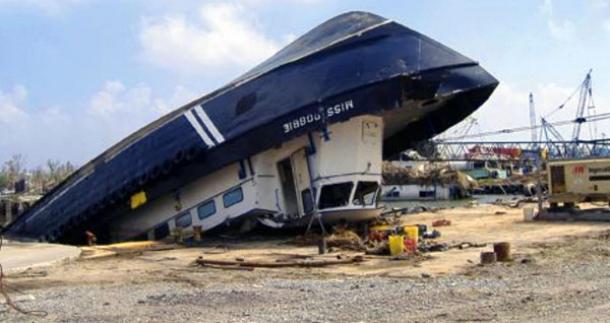 Assessing ex ante disaster risk is inherently a probabilistic exercise, since it involves uncertainties associated with future states. Variables include the number of exposed people and assets, their vulnerability characteristics and future hazard behaviour. In the article that follows this one, Manuela Di Mauro takes a closer look at issues and needs related to assessment of ex ante disaster risk.

This article presents a synthesis of issues, needs and recommendations concerning the further standardization of information on hazard events as an input to the systematic quantification and tracking of their consequences. These were identified by risk experts participating in the “First Technical Workshop on Standards for Hazard Monitoring, Databases, Metadata and Analysis Techniques to Support Risk Assessment”, held at the WMO in Geneva in June 2013. In addition, the article also broadly surveys selected other needs identified during the workshop relating to non-hazard-related risk information.

Despite its limited focus on hazard information, the importance of the WMO initiative cannot be overstated. Although some hazards – such as tropical cyclones and earthquakes – are reasonably well characterized with internationally accepted definitions and parameters for specifying magnitude, timing, location and duration, definitions of other major hazards such as drought and floods are more arbitrary. Yet, drought and flooding alone account for more loss and damage than all other hazards combined. Thus, many records of loss and damage associated with these hazards lack a reference to a clearly defined, correct and well-characterized hazard event. Although further progress in hazard standardization will take time, more systematic and standardized characterization of hazard events is vital for improving the quality and reliability of data on loss and damage. A parallel effort to address non-hazard-related needs for improving loss and damage data would further increase the potential for significant improvements in the evidence base for managing risks and monitoring the outcomes of risk management efforts.

Information about disasters: documenting the losses after an event

Basic data about a disaster include:

The number of systems for recording this information at different levels has grown rapidly in recent years. At the global level, three long-established and well-known databases include EM-DAT, maintained by the Centre for the Epidemiology of Disasters (CRED), NatCatSERVICE, maintained by Munich Re and Sigma, maintained by Swiss Re. An increasing number of disaster loss and damage databases have been, and are being, established at national and local level. A recent study by UNDP documents systems in approximately 60 countries and regions (UNDP 2013). When local-level systems are taken into account the actual number may be considerably larger.

There are many driving forces behind this proliferation of these datasets, among them being that they are necessary for: 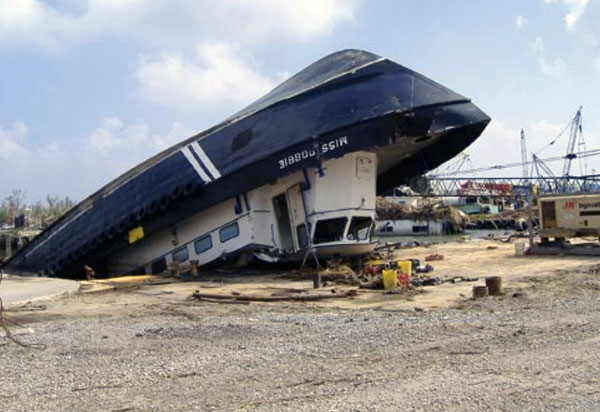 The CRED, Munich and Swiss Re databases are widely regarded as authoritative and have benefited from rigorous nd standardized data collection and reporting procedures sustained over decades. The quality and coverage of country-and local-level systems is highly variable and their diversity inhibits interoperability both among them as well as vertically, with global datasets. Yet, due to the fact that data quality is only as good as its primary source material, local sources are often better positioned to reflect the picture on the ground. Downscaling to national and sub-national levels, therefore, can lead to improved data quality. And, disaggregated data with country-and local-level resolutions are more relevant than global data for decision-making at the country or local level where most risk management decisions are made.

The procedures for capturing and archiving disaster data are generically common to all such systems. The institution that maintains the database receives information on hazard event occurrences involving loss and damage. The institution creates an entry or entries for the event in the database and – according to the database’s particular format – enters as many attributes about the event as possible, applying any relevant inclusion and quality control criteria. There are few, if any, universally-applied standards in this process.

The determination of the hazard event with which the losses are associated, for example, may or may not have been made by a recognized authority, such decisions are often taken by the database operator. Munich Re, for example, applies a hierarchy of “peril families” for assigning hazard typologies. Systematically collected primary loss and damage assessment data may or may not be routinely available from official sources. CRED applies a hierarchical policy for sourcing its data, with priority given to data from United Nations agencies, United States Agency for International Development (USAID) Office of U.S. Foreign Disaster Assistance, governments, the International Federation of Red Cross and Red Crescent Societies, insurance and reinsurance companies, research institutions and the press.

An indexing system for unambiguous identification of disaster events.

Some 80% of entries in country-level databases contain blank or zero values for the key parameters of deaths and economic losses. On some 30% of entries, all values are blank or zero. More than 50% of the databases appear to contain data gaps – years for which no data was entered. These are most prevalent in the earlier years of database entries.

This diversity results in differences from one database to another in terms of how events are classified, geo-coded, and the levels and types of associated losses and damages recorded. There is a lack of clear standardized data collection methodologies and definitions. Consequently, it can be difficult to compare and cross-validate data from different databases both horizontally and vertically between databases with global, national or local-level coverage. These complexities can be compounded in cases of vents affecting multiple countries.

A more ideal situation would be a concentric system of disaster impact data collection – interoperable between sub-national, national, regional and global levels – using a harmonized set definitions and methods. A number of initiatives have been, or are, dealing with facets of this problem. The International Council for Science (ICSU) Integrated Research on Disaster Risk project, for example, has a working group to study issues related to the collection, storage and dissemination of disaster loss data. The working group has identified needs in the areas of user education, data comparability and accessibility, downscaling of loss data to sub-national geographies for policymakers and improving definitions of what constitutes a loss and loss assessment methodologies. A recent report by the European Commission Joint Research Centre2 makes technical recommendations for a European approach to standardization of loss databases. 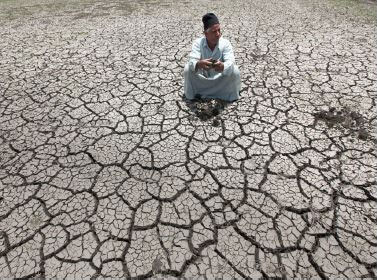 Egyptian farmer squats down on cracked soil to show the dryness of the land due to drought in a farm formerly irrigated by the river Nile. / © Mohamed Abd El Ghany/Reuters

The ongoing WMO-led Disaster Risk Reduction initiative cited above is unique, however, due to the fact that WMO is a global regulator and standard-making organization in the area of hydro-meteorological information.

With the above points in mind, there are three broad areas that would benefit from further standardization.

Being able to correctly attribute losses consistently to the particular hazards with which they are associated is critical for accurate accounting of hazard-related loss and damage. This exercise can be non-trivial, however, due to several complicating factors.

A principle one is that one hazard may trigger another, such as landslides triggered by heavy rainfall triggered by a hurricane. Ideally all losses associated with a particular hurricane should be aggregatable into a total lossfor that event. Yet, it is also essential to record information about locally-triggered hazards since these constitute proximate causal factors at the local level. Different disaster database formats handle this issue differently. A universal standard or set of standards for addressing this problem, such as the Munich Re “peril families,” is needed.

A second issue concerns rigorous definitions of the various hazards for correct and consistent hazard event designation. A storm surge, for example, is different from a flood. Different types of floods can be – but are not always – distinguished from each other, for example, flash floods versus riverine floods versus floods ssociated with heavy rain. Standardized definitions would address this problem.

All hazard events are by definition characterizable in terms of magnitude (intensity), duration, location and timing. Information for all these parameters for some hazards, such as tropical cyclones, is routinely provided in a standardized way. For other hazards, in particular drought, there is little if any standardization of any of these parameters. Database operators often arbitrarily set the start and end dates of disasters as well as the areas affected. This leads to a lack of comparability and inter-operability of data from different sources. A set of standards for hazard event characterization in terms of magnitude, duration, location and timing for all major hydro-meteorological hazards would help fill this important gap.

Finally, unlike disaster loss data, again with the exception of tropical cyclones, little hazard data is systematically archived by relevant authorities. This is a vital gap for conducting research on the relative contributions to disaster causality of hazards, exposure and vulnerability. For example, accurate, complete and consistent historical hazard event data, when combined with data on associated losses and exposure, would make it possible to isolate the contribution of vulnerability to disaster causality, a key current gap in disaster reduction research.3 Guidelines on the preparation of historical hazard databases would address this need. 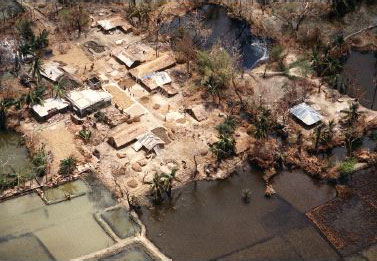 Flooded village in Bangladesh after the 1991 cyclone. / © US Air Force

A related issue to standards is the real-time application of those standards by an appropriate authority when a hazard event (or chain of events) occurs. The naming convention for tropical cyclones is an example of how this can work, but most hazard events come and go without official recognition. Thus, database operators – at local, national and international levels – may all draw different conclusions as to the hazard or hazards to which to assign the associated losses. There is a need for guidelines in the application of those standards to guide official designation of hazard events in near real-time. These would address such issues as who the designated authority is in a country, how the designations are to be framed – hazard names, numbers or other conventions – how the information is made public, how discrepancies are retroactively corrected, reconciliation of designations across borders during hazard events affecting multiple countries, etc.

Due to the fact that the vast majority of disasters are associated with hydro-meteorological hazards, an effort to address the above areas, such as the aforementioned WMO-led initiative, would make a major contribution to the improvement of risk information. As previously noted, however, there are additional issues affecting disaster data quality and usability that are beyond the scope of hazard standardization. These include, but are not limited to:

Unfortunately in this domain there is no parallel for WMO – a duly constituted authority for global regulation and standard setting – for definitively addressing this broader set of issues. Thus a consultative processes in needed to identify a mechanism or mechanisms through which standards could be developed and applied for addressing the non-hazard-related issues identified above. Importantly, the WMO initiative on standards for hazard monitoring at least offers an anchor to which cooperation to address these extended issues and needs could be linked.

Data on the magnitude, location, duration and timing of each hazard or extreme event is crucial information for documenting and cataloguing damage and losses. Yet for many hazards, including flooding and drought, this information is often not systematically collected according to common standards. Nor is it catalogued in an accessible form for future retrieval. Nor, with the exception of named storms, is each event assigned a unique identifier. The latter is vital for correctly linking loss and damage data to the extreme events with which they are associated, as well as for aggregating loss and damage across national borders for events with transboundary impacts.

Disaster risk reduction and particularly climate-related loss and damage have risen to the top of the international policy agenda. Improving the systematic documentation of hazard and extreme events on an event by event basis would constitute a vital contribution to documenting the outcomes of risk reduction efforts and guiding investments to promote sustainable development and reduce disaster losses.

Laurence McLean and Debarati Guha-Sapir, Centre for Research on the Epidemiology of Disasters Angelika Wirtz and Jan Eichner, Munich Re