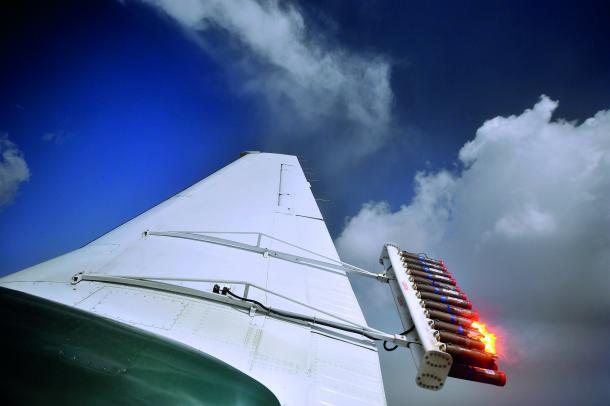 Operational programmes to modify the weather – including to disperse fog, enhance rain and snowfall, and suppress hail – are taking place in more than 50 countries worldwide. Since the discovery in the late 1940s that crystals of silver iodide can form ice crystals in some water vapor, scientists have been working to understand how to alter the way water forms and moves within a cloud.  Despite decades of research, deep skepticism still surrounds cloud seeding due, in part, to the challenge of verifying the efficacy of the technique – establishing cause and effect – given the complexity and variability of weather systems.

Warm or cold, polluted or clean, over a mountain or a field, a cloud’s characteristics are key to the success or failure of cloud seeding efforts. New tools are enabling meteorologists to study and understand clouds and their modification with greater precision than ever, while new technologies such as nanotechnology are expanding the possibilities for the field.  Bolstered by an international drive for research and funding to secure water resources, scientists are cautiously working to modernize rainmaking for the 21st century.

“Water is the basic sustenance of life on Earth, with water and the air we breathe as the two primary issues in this century,” says Dr. Roelof Bruintjes of the U.S. National Center for Atmospheric Research (NCAR) and chair of the WMO Expert Team on Weather Modification. “Improving our understanding of cloud and precipitation processes are the number one priority and the better we understand them, the better we can potentially impact cloud processes with cloud seeding.”

The fundamental challenge of weather modification is identifying and locating the best clouds for the job.  Without clouds, these technologies are powerless. While “cloud seeding could be a tool to enhance water resources, it is not a ‘drought busting’ because we need clouds,” says Bruintjes, whose early training in weather modification was in South Africa. “Nobody can make a cloud or chase away a cloud.”

“The basic concept of weather modification, especially precipitation enhancement, is to find a rate-limiting process related to the conversion of cloud water to precipitation in natural clouds, and to bypass it with a minimum level of artificial stimulation,” says Dr. Masataka Murakami of the Institute for Space-Earth Environmental Research at Nagoya University in Japan. “Therefore, it is important to find the clouds that have the potential to precipitate but cannot exert that ability.”

Indeed, says Dr. Abdullah Al Mandoos, director of the National Centre for Meteorology and Seismology in the United Arab Emirates (UAE): “Any country that has a plan to implement cloud seeding projects needs to investigate the physical and chemical properties of the frequent and available clouds in their territory.”

Part of finding the “right” clouds depends of the temperature. Increasing precipitation requires one of two approaches to help water particles collide, merge, and grow: glaciogenic seeding and hygroscopic seeding. Glaciogenic seeding uses agents, such as silver iodide, that initiate ice formation in “cold clouds,” those colder than 0 °C and that have supercooled water. Because silver iodide has a crystalline shape similar to natural ice, it can create ice earlier in the lifetime of a cloud, giving it more time to grow precipitation-sized particles.In “warm clouds,” convective clouds with large parts warmer than -10 °C, scientists can use hygroscopic seeding, generally with a simple salt. The salt helps water droplets to collide and produce rain.

For either glaciogenic or hygroscopic seeding, it is essential to determine if clouds in a region are already efficient or if cloud seeding can potentially make a difference. “The main cloud seeding methods provide centers for drops and ice crystals to form on,” Bruintjes says. “If these particles already exist in optimal size and concentration in some regions of the world, cloud seeding would not have an impact.”

The location of the clouds is also highly significant. Clouds in the tropics differ from clouds in the mid-latitudes because temperature influences how cloud processes operate. “In addition, clouds in different regions with different levels of pollution can also develop precipitation differently – and even in one region depending on the pollution on a specific day,” Bruintjes says. Anything that alters clouds can affect seeding.

Some of the most successful cases of cloud seeding in the world have happened in mountainous regions, with glaciogenic seeding of “orographic” clouds. In these regions, clouds form from air flowing over mountains. They are an especially attractive target for cloud seeding because high-elevation snowpacks can store water for a region year-round.

In Japan, for example, where water shortage is a transient, not chronic, problem, Murakami says that glaciogenic seeding of orographic snow clouds can be a preventive measure in late spring and early summer. Such operational programmes can be conducted “once the long-term prediction of precipitation becomes more accurate and reliable and when we can predict water shortage with a lead time of a few months,” he says.

Bruintjes and Murakami point to examples of snowpack enhancement projects in Wyoming, USA, and the Snowy Mountains in Australia. In the Snowy Mountains, scientists have been using glaciogenic seeding on cold fronts to the west of the mountains. In the colder months, ground-based generators spray a mixture  of silver iodide that the winds carry east to clouds over the mountains. In an analysis of results from the initial 2005-2009 experiment, researchers found a positive, but not statistically significant, impact of seeding on snowfall; however, they found the targeting of the seeding efforts “unequivocally successful”, with levels of silver iodide higher in seeded areas compared to unseeded ones.  A secondary analysis showed enhanced levels of seeding materials that suggested additional ice particles and thus an impact on cloud precipitation processes. The project continues to this date, well beyond the initial trials. Some reports suggest that snowfall has increased by up to 14%.

Measuring the impact of cloud seeding initiatives is challenging. “Usually we revert to a randomized experiment similar to what is used in the medical community when they test a new drug,” Bruintjes says. Like in a medical experiment, where no two people are alike, “no cloud is the same as another, and there are many factors that can play a role in the development of precipitation in a cloud.”

Over the last 10 years, cloud seeding experiments have benefited from advances in numerical models that can simulate seeding more accurately, as well as improved observational tools to understand the physical processes in clouds due to seeding. These tools include more precise satellite capability and ground-based and airborne dual-polarization radars that can better measure precipitation size.

“Although not perfect, it has been a great step forward,” Bruintjes says. “As we get better at weather prediction, we can better predict a change.”

Another member of the WMO Expert Team on Weather Modification, Andrea Flossmann of Observatoire de Physique du Globe de Clermont Ferrand in France, says that researchers have been working to improve the statistical approaches necessary to validate the randomized approach. “Still, reliable campaigns remain costly, requiring numerous test clouds, both seeded and not,” she says.

One such group is Murakami’s research team, which received a 2015 grant award from the UAE Research Programme for Rain Enhancement Science. “We are working to better evaluate, and ultimately improve, the effectiveness of precipitation enhancement in arid and semi-arid regions through a sound scientific research consisting of data analysis, laboratory experiments, field observation and numerical modelling,” he says. A major aim of the work is to clarify the microphysical structures of clouds suitable for seeding and their occurrence frequency over the eastern mountain areas of the UAE.

Rain enhancement in the UAE

The US$ 5 million UAE Research Programme for Rain Enhancement Science launched in 2015 as an international initiative to advance the research and technology of rain enhancement. According to its director, Alya Al Mazroui, the program has two goals: to boost research in rain enhancement worldwide, and to increase rainfall in the UAE and other arid and semi-arid regions in the world.

Water is a critical issue in the UAE with its 10 000 year-old groundwater supplies running low, and demand for water expected to double in the next 15 years by some estimates. Desalinated seawater accounts for 40% of the country’s water supply. With the high cost of desalination, the UAE has been conducting cloud seeding as a possible lower-cost alternative. In 2016, UAE undertook 177 cloud seeding operations, mostly using hygroscopic seeding in the eastern mountain ranges on the border with Oman to raise levels in aquifers and reservoirs. According to a report from 2015, greater-than-normal cloud cover enabled more missions that year.

As part of its rain enhancement program, the UAE is working to lead the way for greater investments and technological advancements in weather modification. Al Mandoos says he is proud of the “UAE as a global hub that develops the best technologies that contribute to the water shortage solutions.”

In addition to the award to Murakami’s team for improving cloud seeding validation, other recipients of the 2015 award were projects to “use nanotechnology to manufacture more effective seeding materials and land cover modification to enhance the confluence areas and improve the convection initiation,” says Al Mandoos. Using nanotechnology, researchers could potentially create new chemicals for cloud seeding that better mimic the crystalline structure of ice at a nanoscale. The UAE Program team is working with awardees over the next three years to help them implement their research projects.

Al Mandoos of the UAE points to the WMO Guiding Principles for the Planning of Weather Modification Activities as an important resource for countries looking to improve water security. “The guidelines state that countries that practice cloud seeding must investigate seeded and unseeded clouds through a statistical randomization method,” he says. “The outcome of this statistical randomization process must then be supported with an analysis that validates the original cloud seeding operations.”

The 2015 WMO Statement on Weather Modification also discusses weather modification techniques to suppress hail and disperse fog, and it mentions recent interest in climate engineering. “Recently, seeding has been proposed as a climate mitigation strategy, to increase cloud brightness and increase the part of solar radiation reflected into space,” Flossmann says. The WMO report offers caution for such global-scale efforts, pointing out the historical difficulties in proving cause and effect for seeding interventions at the local scale.

Global-scale cloud seeding does have a historical precedence but in an unexpected way: through inadvertent weather modification. For example, volcanic eruptions have injected particles into stratosphere that have reduced temperatures globally for 2 to 3 years after the eruptions (e.g. such eruptions are thought to have contributed to the “little ice age” in the 19th century). As another example of inadvertent weather modification, Flossmann says that satellites have observed that particles released by ship chimneys modify cloud properties of the stratocumulus cloud deck above, appearing to brighten the clouds.

For all weather modification – intentional or not – it is important to remember that “the atmosphere has no walls,” Flossmann says. “What you add may not have the desired effect in your vicinity, but by being transported along might have undesired effects elsewhere.”

But above all, it’s all about the clouds. “There is no one-size-fits-all solution,” she says. “It depends very much on the specific cloud whether adding particles to it will have any effect at all, and if it has an effect that it is in the desired direction.”

Lisa M.P. Munoz is a science writer and content strategist based in Washington, D.C., USA. She is a former press officer and editor for WMO.