Status of the Global Observing System for Climate 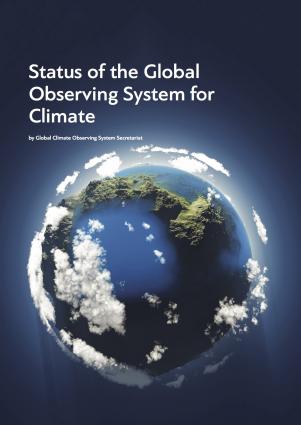 Status of the Global Observing System for Climate

Global observation of the Earth’s atmosphere, ocean and land is essential for identifying climate variability and change, and for understanding their causes. For example, recent observations and analyses have shown that global mean sea level has continued to rise, and it has been possible for the first time to identify the relative importance of the contributions from thermal expansion, melting ice and the storage of water on land.

Observation also provides data that are fundamental for evaluating, refining and initializing the numerical models that predict how the climate system will vary over the months and seasons ahead, and that project how climate will change in the longer term under different assumptions concerning greenhouse gas emissions and other human influences. Long-term observational records have enabled the Intergovernmental Panel on Climate Change (IPCC) to deliver the message that warming of the global climate system is unequivocal.

This article highlights the main finding and conclusions of the Status of the Global Observing System for Climate (Report)1, published in late 2015. The Report offers an extensive account of how well climate is currently being observed, where progress has been made, where progress is lacking or where deterioration has occurred. It provides a basis for identifying the actions required to reduce gaps in knowledge, to improve monitoring and prediction, to support mitigation, and to help meet increasingly urgent needs for information on impacts, adaptation and vulnerability.

The Status Report was prepared by the Global Climate Observing System (GCOS), a co-sponsored programme of WMO, the Intergovernmental Oceanographic Commission (IOC) of the United Nations Educational, Scientific and Cultural Organization (UNESCO), the United Nations Environment Programme (UNEP) and the International Council for Science (ICSU).

This article highlights the main finding and conclusions of the Status of the Global Observing System for Climate (Report), published in late 2015. The Report offers an extensive account of how well climate is currently being observed, where progress has been made, where progress is lacking or where deterioration has occurred.

Ocean observation has developed quickly, with international planning and implementation of observational networks, and new technologies that enable more and better autonomous data collection. While there are still limitations and some issues with established networks, overall structures are in place for the improvement to continue.

Terrestrial observations have traditionally been made on smaller scales, with different standards and methods in different countries. They also have a poor history of open data exchange. Space-based observation is now providing global coverage of improving quality for a number of variables, increasingly with open data access, and there is progress in other areas, through global networks for glaciers and permafrost, for example. Standards, methods and data-exchange protocols for key hydrological variables have been developed. However, an integrated approach to terrestrial observation is still lacking.

Most of the principal findings that have been drawn from the reviews that were undertaken variable by variable and action by action fall straight forwardly into two separate groups, one for in situ measurement and ground-based remote sensing and one for space-based remote sensing, even though many applications of observations make combined use of both groups of data. There are both positive and negative findings, and both need to be acknowledged and taken into account when planning what needs to be undertaken in the future.

For the in situ and other non-space-based components of the observing system, the following is found:

For the space-based component of the observing system, the following ndings are reported:

Data-centre holdings are increasing with the passage of time, and are generally distributed by data type. International data centres hold collections of in situ data for many but not all essential climate variables. Basic satellite data are usually held by the agency that operated the satellite. Derived data products are hosted primarily by the organizations that generated the products. This arrangement is not seen to be problematic, but the Report outlines a few concerns.

Global reanalysis of comprehensive sets of observations has been sustained with improving capabilities and better understanding of user requirements and difciencies in current products.The activity is being placed on a firmer footing in Europe, through inclusion in operational Copernicus service provision, and in Japan and the United States of America, through the commitment of providers to continue and refresh production.

Atmospheric reanalysis for the radiosonde and satellite eras has been supplemented by reanalysis covering the twentieth century and more, assimilating only surface atmospheric data but constrained also by observationally based surface and radiative forcings. Reanalysis has become better established for the ocean, the land surface and atmospheric composition. Good progress has also been made in the development of data-assimilation systems that couple various elements of the climate system, the atmosphere and the ocean in particular.

Further conclusions concerning overarching and cross-cutting topics, and topics specific to the atmospheric, oceanic and terrestrial domains, are presented in the full Report. It is also presents a general indication of progress over the past five or so years by assessing the accomplishment of the actions set out in the 2010 Implementation Plan for the Global Climate Observation System.

To conclude, many countries have improved the contributions that they or their intergovernmental agencies make to the global observing system for climate. The system continues to progress and support better the needs of an increasingly wider user community. With the passage of time, the length of the modern instrumental data records is extending and improving – for recent years by better observations and for earlier years by recovery and better reprocessing and reanalysis of data. However, the system nevertheless continues to fall short of meeting some essential requirements for observationally based climate information, which anthropogenic climate change makes ever more urgent. What needs to be done will be addressed in the forthcoming new implementation plan that GCOS is preparing for publication later in 2016.

We invite readers to consult the Report for a fuller picture of the progress that have been made over recent years, but also to get a better understanding of how much work remains to be done.

International organization of observing systems has been strengthened, especially for the atmosphere and ocean, through the development of the WMO Integrated Global Observing System and the revitalization of the IOC-led Global Ocean Observing System.