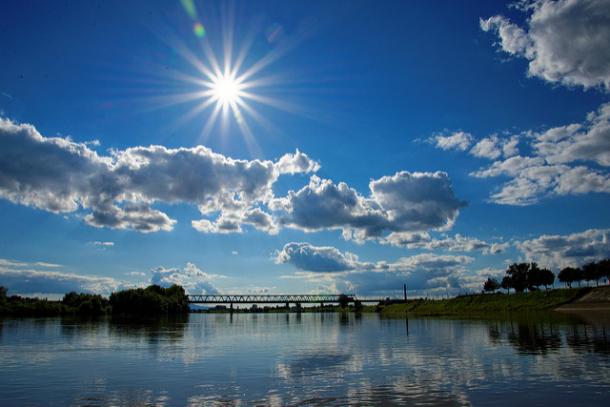 Experiences from the Sava River Basin

Access to high-quality and up-to-date hydrometric data is the foundation for effective water management. The famous management adage, “you can’t manage what you don’t measure” applies just as much to hydrology as it does to other areas. National Meteorological and Hydrological Services (NMHSs), environmental regulators, researchers and the public routinely rely on river discharge, precipitation, lake/reservoir levels and other hydrometric data to underpin their provision of flood warnings, water resource assessments, riverine transport information, management of aquatic ecosystems and much more.

However, rivers do not respect administrative boundaries. In many cases, they flow through multiple local and national jurisdictions on their journey from source to sea. All catchment managers face the challenges of maintaining hydrometric monitoring networks, ensuring systems are in place to maximize utility of data and modernizing infrastructure to take advantage of ongoing information technology (IT) developments. Transboundary river systems have the added dimension of needing to share data among organizations at operational timescales.

The World Meteorological Congress adopted a reso­lution[1] recognizing the importance of hydrometric information sharing and the benefits to its Members with shared river basins in 1999. In doing so, WMO Members committed to broadening and enhancing, whenever possible, the free and unrestricted international exchange of hydrological data products. While the resolution provides a clear framework for data exchange, hydrometric information is both complex and expansive, and its implementation raises questions such as:

These were the questions that those trying to establish a data-sharing policy for one of the most important rivers of South-east Europe had to answer.

The Sava River Basin covers a total area of approximately 97 700 km2 and represents one of the most-significant sub-basins of the River Danube. It is a very important transboundary river basin that is shared among six countries – Bosnia and Herzegovina, Croatia, Montenegro, Serbia and Slovenia, while a negligible part extends also to Albania – with 18 million inhabitants. The Sava River is nearly 1 000 km long, and the average discharge at the confluence with the Danube River in Belgrade (Serbia) is about 1 700 m3/s.

Distinct hydroclimatic variations exist across the basin, with a mountainous alpine climate in the north-west and moderate continental (mid-European) climate in the lower parts of the basin. Long-term average annual precipitation ranges between 600 and 2 300 mm, and long-term evapotranspiration between 320 and 710 mm/year. As a result, spatial distribution of runoff varies from 150 mm/year up to 1 200 mm/year, with a long-term average of about 580 mm/year. In general, the right bank (southern) tributaries of the Sava River are characterized by a much higher water yield than the tributaries to the north.

In 2002, a Framework Agreement on the Sava River Basin was signed by the riparian countries. The agreement led to the formation of the International Sava River Basin Commission (Sava Commission). Its mission is to support navigation on the river, promote cooperation in sustainable water management and undertake measures to reduce water-related hazards.

In an internationally shared basin, the exchange of quality-controlled data and information is an essential element for undertaking basin-wide activities ranging from flood protection to water resources management. Under the Framework Agreement, the Parties – Bosnia and Herzegovina, Croatia, Serbia and Slovenia – are obliged to exchange information on the water regime on a regular basis. However, the technical details of data exchange and interoperability were still to be agreed.

In May 2012, the United Nations Office for Disaster Risk Reduction (UNISDR) and WMO started joint implementation of a project on Building Resilience to Disaster in the Western Balkans and Turkey, with the support of the European Commission. Among its many strands, the project provided an opportunity for WMO to work with the Sava Commission to enhance hydrological data management and exchange procedures. Workshops were convened, bringing together representatives of the NMHS and other related organizations (such as watershed and environmental agencies) to discuss requirements for data sharing and agree principles for a new policy. This would detail what would be shared, how, when and by whom.

The resulting Policy on the Exchange of Hydrological and Meteorological Data and Information in the Sava River Basin (2014), signed by hydrometeorological services and water agencies, was developed to be fully consistent with World Meteorological Resolutions 25 (Cg-XIII) and 40 (Cg-XII). The policy also supports the data- and information-sharing elements of the United Nations Watercourses Convention. At a European level, it is consistent with the United Nations Economic Commission for Europe Water Convention (Article 13) – which encourages riparian Parties to exchange data on the environmental conditions of transboundary waters.

This two-strand approach allows the signatory organizations to continue, and expand, ad hoc data sharing on a project-by-project basis, while also securing a minimum amount of core data exchange. This was seen as being vital for effective management of the basin.

The ever-changing requirements of hydrometric data users and the evolution of monitoring capabilities mean that the data which can or needs to be exchanged under such policies is never static. Importantly, the Sava Policy was written to allow the details to be regularly updated (for example, details of exactly which stations and data types are included). While an initial set of data types and monitoring stations was agreed in annexes to the policy, these were specified in such a way as to allow future modifications of the agreement. This ensures that it continues to meet the needs of signatories, while preventing the need to re-open negotiations on the policy as a whole.

The details of the policy were established by experts on water management issues that work in the basin. They were driven by pressing practical needs and informed by in-depth local knowledge of the monitoring networks and data availability. The development of the policy represents just one step of the ongoing successful cooperation in the Sava River Basin. WMO support to the Sava Commission provided an independent source of advice and help, thus rapid progress was made. The entire process of policy development and signatory took less than 18 months.

Since its signing in 2014, the Sava Commission, in cooperation with relevant national institutions, has taken forward projects that directly build upon the new data and information exchange policy. A Hydrological Information System (Sava HIS), as a component of a Geographical Information System (Sava GIS), has been developed as a tool for collecting, storing, analysing and reporting high-quality hydrological and meteorological data. These data are used in decision-making systems in all aspects of water resources management.

The Sava countries are in the process of establishing a Flood Forecasting and Warning System for the Sava River Basin (Sava FFWS), which will be finalized in 2018. It will be implemented as an open-shell platform for managing the forecasting process, allowing a wide range of external data and models to be integrated. Sava FFWS will integrate Sava HIS (www.savahis.org) as a data hub for collection of real-time hydrological and meteorological data, along with integration of Sava GIS (www.savagis.org) for presentation of spatial layers. Together with various outputs from numerical weather prediction models, available weather radar and satellite imagery, existing national forecasting systems, and different meteorological, hydrological and hydraulic models, these data will be easily “plugged” into a common platform.

Through these and other ongoing developments, the Sava Basin organizations are reaping the benefits of international data exchange. As the demands for hydrometric information grow, the global need for WMO Members to collaborate in exchanging data to support operational activities and services becomes ever more acute. Resolutions 25 (Cg-XIII) and 40 (Cg-XII) provide an overarching policy framework for such sharing, and the capabilities of modern sensors and IT systems provide the tools needed.

Experiences from the Balkans suggest that big steps forward in collaboration are often driven by local needs and local agreements. The Sava Policy demonstrates how WMO can support the development of consensus-based data-sharing agreements as a foundation for integrated management of the world’s transboundary river basins.

Acknowledgements: The Policy on the Exchange of Hydrological and Meteorological Data and Information in the Sava River Basin was developed by ISRBC and Parties to the Framework Agreement, with the support of the WMO Secretariat and the Centre for Ecology & Hydrology in the United Kingdom. The development formed part of the multibeneficiary IPA/2012/290552 project “Building Resilience to Disasters in Western Balkans and Turkey”, implemented by WMO and UNISDR with funding from the European Union. The Sava HIS platform, subsequently developed as a platform implementing the data policy, was developed with financial support from the International Commission for the Protection of the Danube River and the Finnish Meteorological Institute.