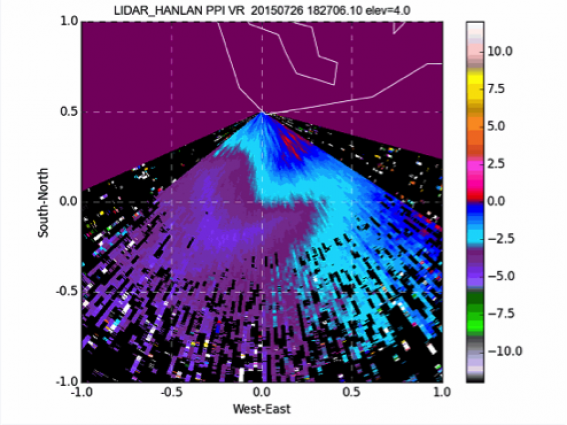 The Pan American and Parapan American Games are a regional international summer sporting event staged in the year prior to the Summer Olympic and Paralympic Games. The Pan American Sports Organization awarded the 2015 Games to Canada in November 2009. Approximately 11 000 athletes, athlete support personnel and technical offcials from 41 countries participated in the Toronto 2015 Pan American and Parapan American Games (Toronto Games). These were held in the Greater Toronto Area in the southern part of the province of Ontario from 10 to 26 July and 7 to 15 August 2015, respectively.

Environment and Climate Change Canada (formerly Environment Canada) was tasked to support the Games with enhanced weather monitoring and venue-specific weather warnings, watches and advisories, to ensure the safety and protection of athletes, staff, volunteers and spectators. The Games provided ECCC with an opportunity to showcase its innovations and technological capabilities. To fulfill its mission, ECCC designed a high-resolution state-of-the-art automated atmospheric monitoring network called the Games Mesonet. Data from the Mesonet informed forecast and numerical weather prediction systems, which produced Games-speciffic alerts (Advisories, Watches and Warnings), and forecasts at a fine temporal and spatial resolution.

In this article, ECCC chronicles its contribution to the Games through data and forecast products.

ECCC worked with about 450 people to ensure the success of the Games. The key objectives were to enhance public safety and decision-making by:

Training was a critical preparatory step towards Games operations. New processes, such as the issuance of venue-specific alerts and forecasts within existing public forecast areas, required a review of product distribution applications. A new level of close coordination between forecast and briefing teams was also necessary. The teams were trained in the use of Mesonet observations, new display applications arising from this Mesonet and high-resolution experimental numerical weather products. Innovative technologies were deployed, including Doppler LiDAR instruments, mobile car top weather stations and a sensor array for a three-dimensional total lightning solution. These all required training for interpretation. Briefing teams located at theToronto Games Main Operations Centre and the Police Unifed Command Centre were tasked with training and/or interpreting these data and products for outside clients.

To meet the anticipated climatological needs of the Toronto Games organizers, the ECCC Games Project Office developed, with a focus on the venue sites, a series of detailed climatologies for Ontario for seven specific areas: tornadoes, heat and humidity index, lightning and days with thunderstorms, extreme rainfall, wind, lake-breeze and Air Quality Health Index (AQHI).

The climatologies were included as part of a series of internal training workshops for operational forecasters and briefing team members. These climatologies were used in the Federal Risk Assessment to assess the impacts and likelihood of weather-related hazards.

Mesonet Observations: A Network of Networks

The Mesonet was designed to monitor weather at the venues. It provided close tracking of southern Ontariolake-breezes, which can be associated with severe weather initiation and high air pollutant concentrations. Knowledge of lake-breeze location increases understanding of heat and air-quality patterns, particularly in the urban environment. It also provided both high-density station spacing and high-frequency minute-by-minute reporting. Standard meteorological variables were reported – pressure, wind speed and direction, relative humidity, temperature and precipitation amounts – as well as a new element, recorded by a black globe thermometer, used in the evaluation of heat stress on the human body.

Two new buoys were deployed just south of the Toronto Islands in Lake Ontario. An AXYS WatchKeeperTM buoy, with a full suite of weather instrumentation, reported every 10 minutes (the standard is once per hour). A smaller TRIAXYSTM Directional Wave Buoy provided precise measurement of directional waves. Four ultra-violet (UV) radiometers reported minute-by-minute observations of sun exposure. A temporary Upper Air station deployed just north of Toronto provided four radiosonde releases per day. An Unmanned Aerial Vehicle was used for the first time by Environment and Climate Change Canada. It monitored temperature, relative humidity, pressure, wind speed and gusts in the lowest levels of the atmosphere. When conditions warranted, the weather monitoring sensors were replaced by air quality probes to measure CO2 and total aerosol concentrations. The Southern Ontario Lightning Mapping Array, the first such deployment in Canada, provided 100% lightning detection effciency at very fine temporal and spatial resolutions – on the order of tens of nanoseconds and tens of metres, respectively. 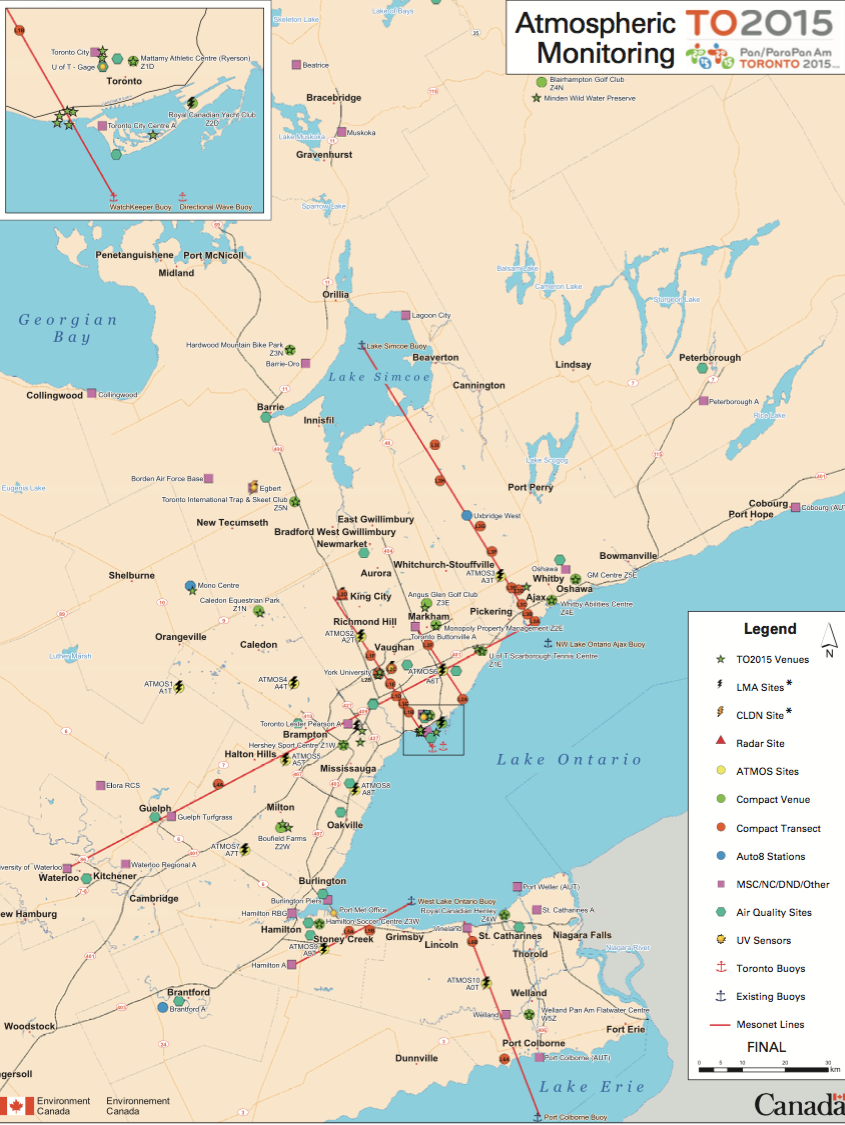 ECCC provided support to data acquisition procedure applications to permit the acquisition, quality assurance/quality control, archive, display and redistribution of minute-by-minute data flow. Much the same was true for the creation and distribution of new forecast products. Providing the briefing teams with real-time access to the venue-specific forecast products was a challenge as they were using workstations hosted by an external organization. Three modified versions of the Integrated Forecaster Workstations had to be built to meet the specific needs of each forecast and briefing team.

The Ontario Storm Prediction Centre (OSPC) is a 24-hour, 7 days-a-week (24/7) operation, staffed by about 30 meteorologists – three to five per shift, depending on weather conditions. During the Toronto Games OSPC added five operational and research meteorologists to their staff, while three National Weather Service (NWS) staff from the United States of America rotated visits.

OSPC started operational support with the provision of specialized weather forecast products for the Pan Am torch relay run, which began in May 2015. Full 24/7 production of venue-specific alerts, forecasts and a daily Thunderstorm Outlook graphic product started on 6 July and ended with the closing ceremonies of the Parapan Games on 15 August.

Forecasts were issued three times per day (amended as conditions warranted) and were valid for seven days. The forecasts included sky condition, precipitation, temperature, humidity, wind speed and direction, and obstructions to visibility. Marine forecasts for the sailing venue in Toronto Harbour was issued three times per day. Forecasts of wind speed and direction, wave height, obstructions to visibility and precipitation were valid for five days.

The Toronto Games provided an ideal opportunity to implement new impact-based triggers for heat warnings, developed through a multi-year collaboration of federal and provincial partners with Public Health Units. Outputs from the 1-km and 250-m experimental Numerical Weather Predictions systems were designed to enhance weather forecasts during the Toronto Games and to support applications related to weather and health services. The Toronto Games also provided an opportunity to showcase the development and application of the next-generation air quality model, the Global Environmental Multiscale-Modelling Air quality and CHemistry (GEM-MACH), run at 2.5-km resolution for the Games.

ECCC provided briefings in English and French to the Toronto Games Main Operating Centre and police, including interpretation of OSPC forecast products and observational data to the most critical users.These briefers were the sole point of contact for questions related to forecasts and sport-specific weather sensitivities.

Whereas the bulk of essential weather services was delivered by ECCC, a great deal of work was accomplished with partners. For example, the Ontario Ministry of the Environment and Climate Change and the University of Toronto implemented a study of trafic-related air pollution in Canada to evaluate the utility of a network of air quality monitoring stations.

ECCC had a two fold objective in its engagement for the Toronto Games. The first was to support the Games from a meteorological perspective. The second was to learn from the scientific research, development and technological innovation to make meteorological services even better.

Two Doppler LiDAR systems, capable of measuring wind speeds up to 7 km away, were deployed during the Games: one at Hanlan’s Point (Toronto Centre Island), and a second mobile unit in the back of a pick-up truck. They were instrumental in improving understanding of the convective and dynamic processes driving convective storms and the evolution of the lake-breeze front.

During the Games, three hybrid vehicles equipped with Automated Mobile Meteorological Observing System (AMMOS) units were deployed as part of the high-resolution atmospheric monitoring network. These were driven along routes between Lake Ontario shore in Toronto and suburban/rural areas to the north and west. They collected standard meteorological data (temperature, humidity, pressure, wind speed and direction) at 1-second intervals in locations where fixed stations could not, such as along roadways surrounded by “urban canyons”. AMMOS vehicles also carried ne particulate air quality sensors, and one AMMOS vehicle carried a prototype AirSENCE air quality sampling system.

ECPASS also served as the communications hub for science activities, with a daily blog post and a forum in real time. More than 250 posts were written over the period covering both Games. The Weather and health Information for Decision Optimization Management (WISDOM) was an application developed by public health authorities to provide a portal for weather-related decision-making around theToronto Games.

During the lead-up years to the Games, many innovations and procedures, which were necessary for the teams to have equipment and staff in place, were implemented. There was a significant amount of testing required to assure optimal performance. Forecasters and briefers needed to be trained in the use of new hardware and software to ensure full utilization of Mesonet datasets, high-resolution numerical weather prediction and air quality model products that would be available to support the Toronto Games alerting programme. This included contingency planning to determine and document alternate courses of action for the provision of services in the event of an outage of OSPC or either of the two briefing units. A series of five integration tests were conducted during an Intensive Operations Period (IOP) to verify and validate that all instruments, workstations and staff were ready for the Games.

The Toronto Games provided an opportunity for EC3 to test next-generation monitoring strategies, prediction models, forecast methods, data acquisition processes and distribution applications. Long-standing working relationships with national and international agencies were renewed and strengthened. There was close cooperation between the research and operations branches within Environment and Climate Change Canada, which led to the creation of a unified dataset that included all monitoring, forecasts and models used during the Toronto Games. This dataset is secured and available for use by the international community.

Overall, the “weather services” programme for the Toronto Games was a successful effort that has left ECCC with new tools and an understanding of how to better support any large event. The Toronto Games team overcame many challenges, some foreseen, some emerging as they advanced closer to the launch of the games. The team is most willing to share lessons learned and best practices in addressing the complexity of providing “fit-for-purpose” services at a fine scale while deploying high-resolution monitoring and forecast systems.