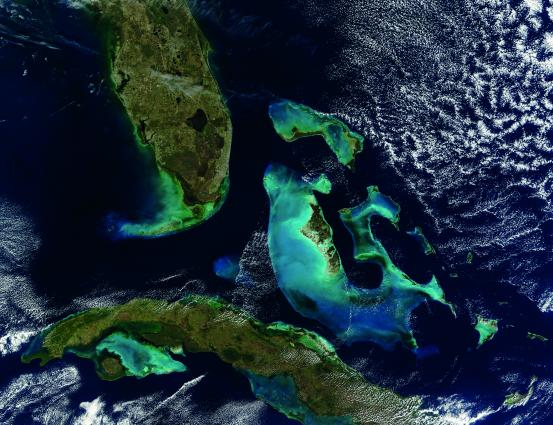 Humanity has a primordial fascination with clouds. The meteorological and hydrological communities have come to understand through decades of observation and research that cloud processes – from the microphysics of initial nucleation to superstorms viewed from satellites – provide vital information for weather prediction, and for precipitation in particular. Looking at clouds from a climate perspective introduces new and difficult questions that challenge our overall assumptions about how our moist, cloudy atmosphere actually works.

Clouds are one of the main modulators of heating in the atmosphere, controlling many other aspects of the climate system. Thus, “Clouds, Circulation and Climate Sensitivity” is one of the World Climate Research Programmes (WCRP) seven Grand Challenges.  These Grand Challenges represent areas of emphasis in scientific research, modelling, analysis and observations for WCRP and its affiliate projects in the coming decade.

Visible and infrared satellite imagery of our planet almost always shows clouds aligned with and distributed along the large swirls and eddies of atmospheric circulation. Animating successive still images of clouds can provide clear documentation of these circulatory motions. But what if cloud formation processes and systems, instead of serving as outcomes and tracers of large-scale circulations, actually influence or even determine these large-scale circulations?

We know that clouds undergo condensation and evaporation processes and interact with solar and infrared radiation as they go through their individual cycles of formation, maturation and dissipation. In addition, we know that mesoscale up- and downdrafts form within cloud systems. These thermodynamic and dynamic processes can be expected to affect the transport of heat, moisture and momentum, and to stimulate waves and turbulence, perturbing local conditions while rectifying the large-scale atmospheric state. Through these local and remote effects, clouds influence atmospheric static stability, wind shear and meridional gradients of temperature.

Based on these facts, we can presume that clouds impact the structure, location and strength of small-scale disturbances, such as tropical and extratropical cyclones, and larger hemispheric-scale features, such as mid-latitude jets. To understand the regional and global impact of a warmer and moister climate, we must improve our ability to describe and interpret the cause and effect relationship between clouds and circulation. The strengths and limitations of our current understanding of this relationship can be illustrated by examining four different areas.

The sensitivity of our climate – that is, how much temperature will increase in response to rising atmospheric carbon dioxide concentrations – remains, intellectually and economically, one of the most important questions in climate research. Recent work has separated the factors controlling climate sensitivity into those
that are known and reliable, and those that are less well understood – largely, cloud feedbacks. While some cloud feedback aspects have been explained, such as those related to the vertical extent of deep clouds or to boundary layer clouds over the ocean, a more fundamental matter remains a mystery: the interplay of clouds and convection in present and future climates. It is clear that our uncertainty concerning cloud feedbacks stems largely from the present-day rudimentary treatment of convective mixing in models. The research community needs to approach the convection problem systematically, using both improved observations and a hierarchy of comprehensive and convection-focused models targeted at undisturbed maritime conditions and remote measurements of lower tropospheric water vapour. Community focus on this convection issue will lead to substantial progress and have a significant impact, given the issue’s key relationship with cloud feedbacks and climate sensitivity.

While we know that as clouds embedded within storm tracks shift, they influence the temperature gradients that gave rise to the storms in the first place, we are only beginning to understand the myriad ways in which clouds couple with storm tracks. The relatively large scale of storm tracks makes them particularly amenable to hierarchical modelling approaches at cloud-resolving and global scales. These approaches can advance our understanding of how moist processes along frontal systems, interactions with ocean circulations, and cloud radiative effects collectively and interactively influence storm development and storm track structure.

As these models and our understanding evolve, it is likely that the use of paleoclimate reconstructions and models – to assess, for example, how storm track changes may have influenced past changes in the overall hydrological cycle – will increase. Enhanced understanding of past and present storm track dynamics will improve our ability to predict future changes.

Climate forcing that leads to changes in the strength, width or location of tropical rain belts almost certainly involves cloud feedbacks. In a complicated interplay of forcing and feedback, localized cloud processes induce hemisphere- and planet-wide changes in circulation, which in turn influence the location and intensity of rain belts. For example, mesoscale circulations induced by convection seem to influence the poleward extent of monsoons, while planetary-scale circulations can extend the influence of rain belts to distant extratropical locations. Through a similar combination of local thermodynamic and large-scale dynamic processes, high-latitude heat sources can induce displacement of tropical rain belts across large distances.

In present-day climate models, a deficit in cloudiness over the Southern Ocean warms the entire southern hemisphere, causing excessive precipitation in the southern tropics and driving a too-strong southern Inter-Tropical Convergence Zone. Similar cloud-related factors help explain why cooling in one hemisphere caused by aerosols or ice sheet expansion pushes tropical rain bands toward the opposite hemisphere. Modelling these cloud processes and cloud-to-circulation connections properly will allow us not only to understand past changes in rain band position and intensity, but also to predict future ones. “Proper” modelling in this case will require the coordinated application of a hierarchy of models to work through specific hypotheses, guided by robust evidence of past changes.

We know that clouds and the convection processes that initiate them tend to aggregate and organize, and that this organization can play a role in the dynamics of the climate system. Recent idealized simulations have demonstrated that convection can aggregate spontaneously in the absence of external drivers, leading to the concept of “self-aggregation”. Cloud-resolving simulations suggest that instances of self-aggregation might increase with temperature, while model simulations and observational evidence suggest that greater aggregation results in a drier, clearer atmosphere that is more efficient at radiating heat into space. Thus, convective aggregation could feed back on climate changes forced by other influences and contribute to changes in extreme events.

The presence of organization on scales of tens to hundreds of kilometres exposes the probability of widespread impacts, including the aforementioned link between cloud feedbacks and tropical rain belts. As understanding and modelling skills advance, one can expect innovative simulations to explore aggregation processes in large-scale models side by side with disaggregation processes in fine-scale models. Such an array of tools and approaches will be necessary in order to assess how convective aggregation impacts climate.

As these four topics demonstrate, clouds do not only act as tracers of a turbulent atmosphere, they also embody processes that can actively control circulation and climate. Each example is confronted with an intimate and complex relationship between clouds, convection and larger scale circulation, with clouds and convection taking a determinant role.

Given the strong dependence of regional climate patterns and extremes on large-scale circulation, it is important that climate research seek to understand both how clouds and convection affect atmospheric dynamics and how these effects will change as the troposphere becomes warmer and wetter, the stratosphere cools and the cryosphere shrinks. Progress toward understanding the interplay between clouds, circulation and climate sensitivity is a primary metric of our ability to anticipate future climate.