Users are the Winners as WMO Information System Comes of Age 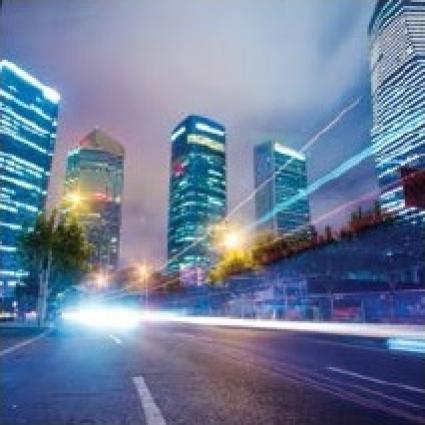 Users are the Winners as WMO Information System Comes of Age

The past two years have been marked by intensive efforts to complete the WMO Information System (WIS) and make it fully operational. The three major Global Information System Centres (GISCs) that supported the formal launch of WIS operations in January 2012 have since been joined by 4 more and 8 others will come online in 2014. Together, these 15 GISCS will play a key role in bringing the global system for sharing data on weather, climate and water into the Internet age. With the system infrastructure now virtually complete, the next few years will demonstrate the enormous value promised by this innovative concept as all WMO Members actively participate in WIS and make more data available.

The implementation of the WIS concept responds to a 2003 resolution by the World Meteorological Congress that sought to expand and strengthen the management and distribution of the data of WMO Members. Until that point, only World Weather Watch (WWW) and related programmes could share that data via the WWW Global Telecommunications System (GTS). Under WIS, other WMO and international programmes can now also share and access that data, and all users are benefiting from improved data discovery and management services. To ensure a smooth transition, WIS builds on the GTS infrastructure, accommodates existing systems and investments, and provides sufficient flexibility to allow participating data systems to enhance their capabilities over time as their national and international responsibilities grow.

WIS was designed to accommodate existing GTS operations that are reliable, effective and strongly managed. It also incorporates new systems based on modern Internet technologies with faster turnover times. As a result, WIS can be viewed as consisting of two parts: one part contains the GTS operations for time-and operation-critical data, while the other part builds on this by introducing new information technologies and services that provide flexible data discovery, access and retrieval services. This approach allows contributors to reuse their existing legacy systems and to add new WIS services to them. Furthermore, a WMO Member can delegate the provision of certain services to other Members. These two elements – the reuse of existing legacy systems and the principle of delegation – offer a simple entry into WIS for all Members.

WIS encompasses three types of centres. The Global Information System Centres (GISC) are the main WIS innovation. Each GISC operates a comprehensive metadata catalogue that is synchronized with the other GISCs. It holds a 24-hour cache with all data and products intended for global exchange, and it offers flexible subscription services for data and products. The GISCs are connected through the WIS Core Network to ensure an end-to-end delivery of warnings within two minutes of initialization. The three GISCs that became operational in January 2012 are hosted in Beijing, China, Offenbach, German, and Tokyo, Japan2. Other operational GISCs are in Melbourne, Australia, Toulouse, France, Seoul, Republic of Korea, and Exeter, United Kingdom of Great Britain and Northern Ireland. Presently in the process of becoming operational are Brasilia, Brazil, New Delhi, India, Tehran, Islamic Republic of Iran, Moscow, Russian Federation, Jeddah, Saudi Arabia, and Washington DC, United States of America. The GISCs in Pretoria, South Africa and Casablanca, Morocco will come online in 2014.

The second category of WIS centre consists of National Centres. All existing National Meteorological and Hydrological Centres of WMO Members were approved by the WMO Executive Council in 2013 as WIS National Centres. The implementation effort required to become a National Centre is quite modest. Each Centre is associated with a GISC, to which it uploads or downloads its data – via the Internet, the GTS or an intermediary GTS Regional Telecommunications Hub. The only new task for the National Centre is to upload discovery metadata describing the data and products being provided so that they can be searched. 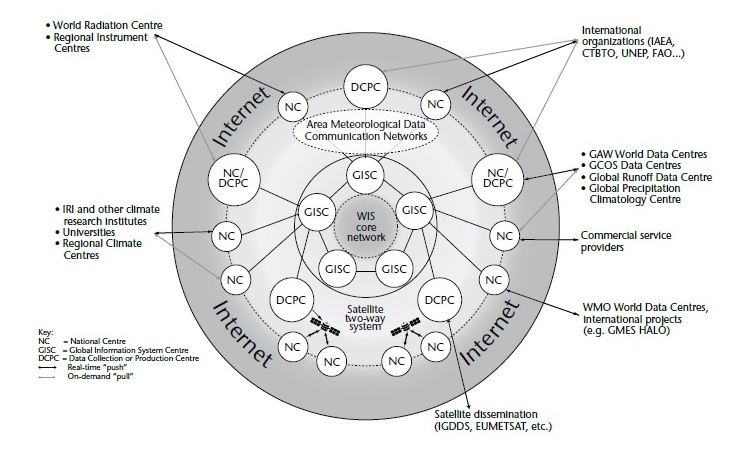 Types of WIS centres and typical interaction between them (Source: Guide to WIS, WMO-No. 1061)

The third type of centre is the Data Collection or Production Centre (DCPC). These Centres collect, disseminate, add value to, and archive regional or programme-specific data and products. Like National Centres, they also offer data discovery and access and retrieval services. They upload their discovery metadata to their Principal GISC. Examples of these Centres include the Regional Telecommunications Hubs, the European Organisation for the Exploitation of Meteorological Satellites (EUMETSAT), the European Centre for Medium-Range Weather Forecasts (ECMWF) and the African Centre of Meteorological Application for Development (ACMAD).

As of November 2013, the WIS structure consists of around 230 National Centers, 130 Data Collection and Production Centres, and 15 operational or pre-operational Global Information System Centres.

Discovering data through the catalogue

WIS serves a multitude of users by acting as a one-stop shop for all activities related to data management. For the first time, users with the appropriate access privileges can easily find and retrieve all the weather, climate and water data and products they need in one place. Data and products that are of worldwide interest remain available in the 24-hour GISC cache. Authorized users can gain immediate access to the data and do not need to wait indefinitely for their request to be routed through various GTS hubs before the data are delivered. Furthermore, they can easily modify their data subscription and maintain their discovery metadata as needed.

Now that WIS has been in operation for almost two years, the focus needs to turn to training users so that they can become familiar with the services. The GISCs are organizing user meetings and capacity-building exercises to inform users about the WIS concept and to review together with the users the discovery metadata and the procedures for uploading data and products. The GISCs also collect user requirements and obtain direct feedback from their user community. This feedback is crucial for improving the services offered. It creates a win-win situation for both sides: users benefit from a better service and a reduced daily workload, while service provider can spend the support resources that this frees up more efficiently, thus further improving services and user satisfaction.

In addition to supporting National Meteorological and Hydrological Services with their operational monitoring and forecasting, WIS supports a wide range of other users. To illustrate:

The European Union-funded BALTRAD project, which created a sustainable weather radar network for the Baltic Sea Region, provides a tangible example. The project requires 12-hourly accumulated precipitation data from as many stations as possible from its Members. There data analyst can issue a combined search of precipitation in the geographical region through WIS. After selecting the relevant data, he can set up a subscription to retrieve the data. 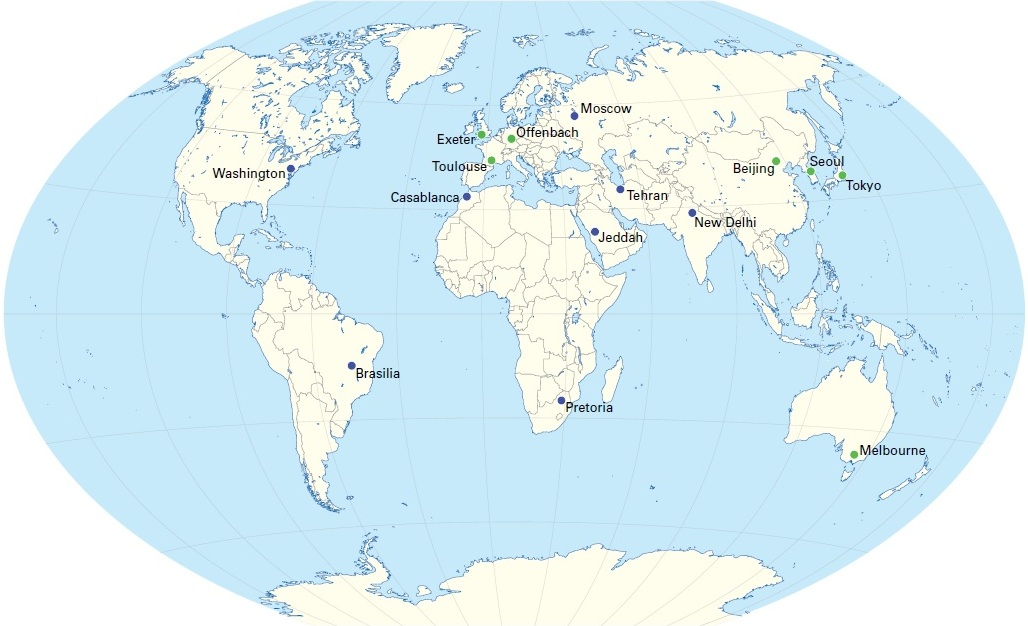 In two short years of operation, WIS has already succeeded in providing an overarching approach to data management for all of WMO, including the emerging WMO Integrated Global Observing System (WIGOS) as well as related international programmes such as the World Climate Research Programme. In this way, WIS provides value to all people, projects, programmes and organizations searching for weather, climate and water information. As a further benefit, WIS will also increase communication between WMO Members and inspire new forms of co-operation in a range of emerging fields.

The author thanks the WMO WIS Secretariat, the WIS in a nutshell authors and his colleagues Hermann Asensio, Albert Brotzer, and Michael Dreiucker for their contributions to this article.