Weather and Climate Services: An Increasing Range of Choice for the Public and Private Sectors 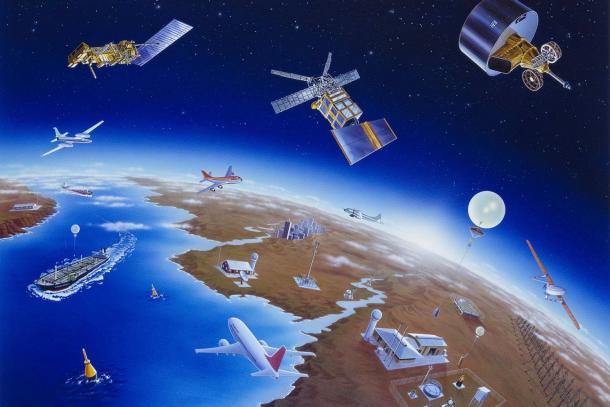 Weather and Climate Services: An Increasing Range of Choice for the Public and Private Sectors

Over the past decades, meteorological and hydrological services have seen a growing participation of the private sector in weather and climate services (WCS)1 as a result of many interacting factors. Technical developments in observation technology, such as remote-sensing, and reductions in the unit cost of information and measurement equipment, have made observation capacity more affordable and accurate. Such technology has therefore become more diversified and dispersed (Perrels et al., 2013, Chapter 3; Rogers and Tsirkunov, 2013). This means that National Meteorological and Hydrological Services (NMHSs) now have much less of a monopoly position regarding observation and basic data provision than they had before 2000.

Yet, in most countries, NMHSs still control the observation system. But impending technological changes in observation, political views on the span of public service provision and trends in participatory WCS systems may well tilt the balance further in favour of private sector service providers. NMHSs grapple with this development. Economic theory that define public, private and intermediate goods and service could help define a strategy for the road ahead. The influence of open data policy (such as that of the European Union) and other regulatory developments, in conjunction with innovations in WCS is also an important part of that discussion.

A broadly shared default assumption in most of today’s economic theories is that goods and services are made by private actors (entrepreneurs) who sell their products on a market. However, there are good, well-documented justifications (for example Picot et al., 2015, Chapter 1)) for public sector production of certain services:

States have applied the first reason for centuries. The second and third reasons are typically due to the emergence of industrialized nations, where States understand they should do more to maintain and promote societal prosperity. The fourth reason is associated with emergence of the welfare state, where States acknowledge that modern societies benefit if all citizens are enabled to achieve or maintain some minimum level of welfare and well-being.

The grounds for public provision of WCS can be drawn from all four lines of reasoning. Public sector severe hazard detection and warning services refer to the first and third arguments. The creation and maintenance of observation networks and related datasets typically follow from the second and third arguments. While the public provision of WCS for citizens and various vulnerable sectors, such as agriculture, is typically based on the fourth line of reasoning (merit good).

Yet, not all WCS fit into this public goods definition so easily. A part of the freely available public weather services could also be delivered through commercial channels, either by charging modest amounts and/or by using other business models in which weather information is an add-on to other charged services (such as tourist or travel information) or resourcing is based on advertising. Similarly, some segments of agriculture might be served better by charged, yet more tailored, services. There is also ever more observation capacity installed outside the networks managed by NMHSs, including – at one extreme – (micro)satellites and – at the other end – citizen participation/crowdsourcing-based applications. The resourcing and business models of these systems differ crucially from the resourcing of NMHS observation networks.

Therefore, the simple dichotomy of public–private goods does not suffice, but intermediate types of goods should also be considered for WCS. In economics, the definition of public, private and intermediate goods types is based on variation over two dimensions:

Goods and services that do not suffer (much) from degradation effects, but which allow for excludability, are termed “club goods.” This reflects that only the “members of the club” have access to these goods or services (for example, after paying membership), which is otherwise similar to a public service (shared use among the members). The other, sort of hybrid, case is goods and services for which excludability is harder or impossible, where they suffer from degradation due to (large) use. These are called “common pool resources,” referring to localized natural resources, such as lakes and pastures, but also human-made systems such as information portals. Figure 1 positions the different types.

Note that degradation spillovers could be negative (so add value rather than diminish it), if networking and reputation effects are important. For example, increasing use of particular data services supports the credibility (trust) and attractivity of these for existing and prospective users; thereby, some “clubs” can grow ever stronger. On the other hand, in the case of WCS, common-pool resources are more flexibly located in the diagram. Model platforms could exercise excludability policies, but that is unusual and may run counter to the need to create ample proof of the validity of models. Yet, if model application requires support, which is often the case, abundant use may result in more frequent occurrence of less skilful use of the models. On the other hand, for brokerage (as is emerging for climate services), excludability may be somewhat easier to realize, but degradation effects may be weaker.

It is also important to realize that the degradation effect of use may not be in the quality of the delivered service, but in the benefits derived from its use. A significant part of the use of WCS entails potential benefits for its users, which tend to get smaller the more competitors are using these services. This notion can apply to farmers, electricity companies, tourist services and so on.

It should be noted that in some cases, the applicable type of good or service is the result of a political decision or owing to certain legislation principles, and not the consequence of the inherent characteristics of that good or service. For example, legislation may stipulate that particular types of services should be available for all citizens and organizations free of charge or that nobody may be excluded from access to a service. This has happened for several WCS in various countries; in principle, such decisions could be reconsidered.

Technical development on the observations side of WCEs entail a growing diversity in data-sourcing options, enabling trade-offs in service delivery between quick and accurate, and also between cheap and more personalized, including learning options for providers and users. As a consequence, alternative business models are required for fit-to-purpose service delivery (Rogers and Tsirkunov, 2013). However, this may be unfamiliar to public providers or even impossible due to market regulations.

The drive towards open access to data produced by the public sector is global, even though member countries of the Organisation for Economic Cooperation and Development (OECD) tend to show more progress. The European Union, with the Open Data (former PSI) and INSPIRE directives and their monitoring, emphasizes that open data policy implementation should really enable and promote use by third parties, both private and public. This encompasses the meteorological data of NMHSs, generated or obtained owing to their (basic) public service obligations. To unleash significant benefits, generation based on open meteorological data and also many other data, notably map information, should be open access.

Furthermore, there should be more attention on appropriate business models to fit the diverse service delivery contexts in which distinctions between supplier and user can get blurred due to co-design and co-production approaches. This often involves forms of public–private and public–public partnerships (Larosa and Mysiak, 2019; Stegmaier and Perrels, 2019). As European Union member States diverge in their national regulation with respect to degrees of separation of public and private provision of (same or similar) services, NMHSs and other actors can face different conditions across Europe. For climate services, there are indications that strict separation can frustrate product development (Stegmaier and Perrels, 2019).

The European Union, in cooperation with the European Centre for Medium-Range Weather Forecasts (ECMWF) as host, plays a crucial role in the development of the Copernicus Climate Change Services (C3S) and the Copernicus Climate Data Store (CDS). As C3S and CDS are open and contain many data with a global coverage, these facilities enable global cooperation and competition in climate services development and provision. The bearing of these features for the options of different NMHSs, not least in connection with increasing diversification in satellites and satellite products, is hard to assess.

Open data policies and the emergence of basic climate service platforms invite many companies to develop their own specialized WCS aimed at particular customer segments with willingness to pay for tailored services with clear benefit generation potentials. Similarly, various broader oriented consultancy and expertise service companies integrate elements of WCS into their portfolios, thereby offering, for example, more comprehensive risk management services for their clients than a separate weather and climate expertise provider could offer.

These changes invite public WCS providers to consider their positions in the value chains of the various WCS product segments in which they are active (for example, see Figure 2). For instance, it may be more effective for them to concentrate on upstream and/or midstream parts of the value chain rather than downstream. To ensure service delivery for end users with maximum societal benefits, public WCS should better explore alternative public–private partnerships and fitting resourcing models to these (Larosa and Mysiak, 2019; Stegmaier and Perrels, 2019).

Perrels, A., 2018: A Structured Analysis of Obstacles to Uptake of Climate Services and Identification of Policies and Measures to Overcome Obstacles so as to Promote Uptake. EU-MACS Deliverable 5.1, http://eu-macs.eu/wp-content/uploads/2018/12/EUMACS_D51_final-1.pdf.

Perrels, A., A. Harjanne, V. Nurmi, K. Pilli-Sihvola, Ch. Heyndricx and A. Stahel, 2013: The Contribution of Weather and Climate Service Innovations in Adaptation to Climate Change and its Assessment. Deliverable 2.2, FP7 ToPDAd project, http://www.topdad.eu/publications.

Adriaan Perrels is a Research professor at the Finnish Meteorological Institute, Finland