Weather and Water Go Hand in 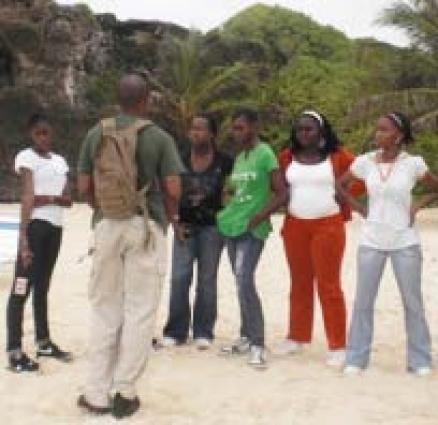 Weather and Water Go Hand in

Youth activities at the Caribbean Institute for Meteorology and Hydrology (CIMH) in Barbados centre on its annual summer school camps and on encouraging students to pursue hydrology, meteorology and related atmospheric sciences as a career.

The annual summer school that was launched in 2007 focused solely on hydrology. In 2008 and 2009, the camp offered concurrent meteorology and hydrology activities. Participants had to choose between the two, but they came together for lectures on common topics and for off-site field trips. In 2010, the coordinators organized a combined meteorology and hydrology programme and adopted the name “Weather and Water Camp.” The camp took a haitus in 2011 but has continued under that name since then.

The Weather and Water Camp is based on a four-week Hydrological and Meteorological Observer’s course. The course is practical and focuses on the fundamental aspects of both fields. It targets secondary school students aged 14 years and older and is also open to teachers and trainers at secondary and tertiary level institutions. Participants learn about the instruments used for weather observation, the hydrological cycle, global and tropical weather systems, electronics in Earth sciences, water quality testing, agrometeorology, seasonal and daily rainfall and temperatures in the Caribbean, measuring and estimating evapotranspiration, scalar analysis, satellite and radar imagery, features on weather charts, forecasting techniques, disaster management and climate change.

Numerous activities are organized. On arrival students are shown how to make and log daily observations and given observation booklets to maintain their own daily logs. They go on field trips to institutions involved in meteorology, hydrology and related sciences such as the Barbados Meteorological Services at the Grantley Adams International Airport, the Barbados Water Authority’s groundwater pumping stations and the Ionics Freshwater Limited’s desalination plant. The Coastal Zone Management Unit takes them on a full-day trip to study the coastal features on the south, east and north of the island. They are shown documentary videos on extreme weather events. And lots more…

At the end of each course, the students are divided into groups to make presentations on what they learned. Most students put a lot of effort into these presentations. Some of the more recent ones highlighted:

• The effect of climate change on water resources;

• The effect of the climate on vectors in Barbados;

• Global warming and its effect on weather in the Caribbean; and

• Sea surface temperatures and their impact on marine life.

The camps, as well as all CIMH outreach and educational activities for youth, aim to stimulate interest in pursuing a career in hydrology, meteorology and other related fields. In addition, CIMH participates in the annual Barbados Association of Guidance Counselors (BAGC) National Career Showcase and makes presentations on request at various high schools across the island.

These efforts are bearing fruit. Of the 26 Barbadian students currently enrolled as meteorology majors at the University of the West Indies, Cave Hill Campus, six participated in the CIMH Weather and Water Summer Camp and four benefited from a career showcase or other CIMH outreach activity. That is approximately 40 per cent of Barbadian meteorology majors.

CIMH will continue to fulfill its mandate by raising awareness of meteorology, hydrology and climatology in schools and general public. The demand for persons with such expertise is increasing as the region implements climate change adaptation strategies. 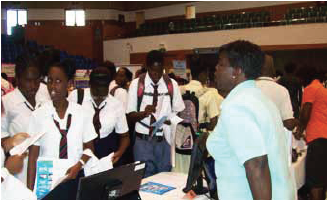