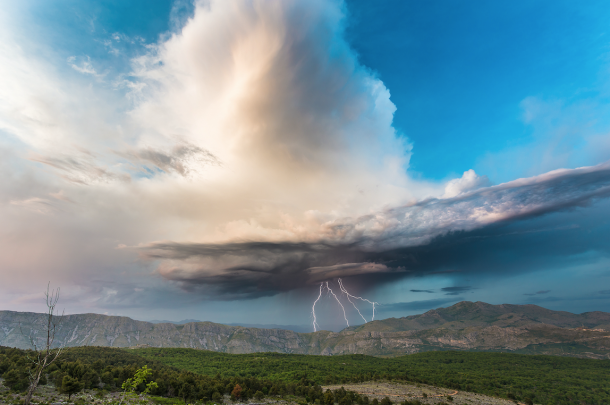 In 2005, the television coverage of Hurricane Katrina, a deadly tropical cyclone that hit the North American coast near New Orleans, was both heartbreaking and enthralling to view.  As I watched, I was struck by a comment that I heard several times from different reporters:  “This is the worst hurricane of all time.”  Immediately, as an atmospheric scientist, I realized how false that statement was.  For example, while Katrina was deadly with over 1 800 killed, the dreadful 1970 tropical cyclone that struck what was then called East Pakistan (now Bangladesh) had a massive death toll of 300 000 people.  However, I aIso understood that an official death toll value or other information from an extreme weather event was something that was not easily uncovered or accessible to the general public.  At that time, there was no comprehensive, and official, database of weather and climate extremes addressing the “hottest,” “coldest,” “windiest,” “deadliest” and other extremes of our planet.

I contacted several of my colleagues (Jay Lawrimore, Roger Edwards and Chris Landsea) and we wrote an article on what was then considered the best-known and accepted weather and climate extremes for Earth for the Bulletin of the American Meteorological Society (Cerveny et al. 2006).  In that article, we also advocated for the creation of an official global database of weather and climate extremes.   Shortly after its publication, I received a call from Thomas Peterson, who later became President of the WMO Commission for Climatology (CCl).  He asked me to present the CCl subgroup of which he was then chair with a proposal for an official WMO Archive of Weather and Climate Extremes .  I did so and, in 2007, CCl established the WMO World Weather and Climate Extremes Archives (wmo.asu.edu/).

One important question should be addressed before going into detail on the Archive: “Why do we actually need a world archive of weather extremes?” There are six major reasons:

However, while some individual countries have their own committees for determining national weather records, until 2007 there was nothing official for the world. The WMO Archive maintains official records of the world, hemispheric and regional extremes associated with a number of specific types of weather.  Presently, the Archive lists extremes for temperature, pressure, rainfall, hail, wind, and lightning as well as two specific types of storms, tornadoes and tropical cyclones. One common weather variable, snowfall, is not listed because of potential issues in consistent official measurement around the world.

At the time of the Archive’s creation, we expected that we might have to evaluate a new record every few years.  Since 2007, we have actually evaluated more than fifteen potential records in a process that has become codified over the past decade.

Following an initial assessment of a new potential extreme and available evidence by the leadership of the CCl and the Rapporteur of Weather and Climate Extremes, an ad-hoc evaluation committee of international top atmospheric scientists is assembled.  In the years since its inception, we have had committees comprised of scientists from countries including Argentina, Armenia, Australia, Bangladesh, Canada, China, Colombia, Cuba, Egypt, France, Germany, India, Israel, Italy, Japan, Kuwait, Libya, Mauritius, Mexico, Mongolia, Morocco, New Zealand, Pakistan, South Africa, Spain, Sweden, Switzerland, Turkey, United Kingdom, United States, Zimbabwe and several other Members of the WMO.

The members of these committees are selected for a range of specific expertise, including local climate knowledge, understanding of factors contributing to an extreme occurring at a particular location or specific climate phenomena for the world in general, and specialized knowledge.  The Rapporteur, in conjunction with a committee member from the local area of the potential extreme and others, constructs a background report of the available information and data regarding the extreme observation.  This report includes specifics on the exact geographic position of the observation, the type of equipment used to make the observation (and specifics on its calibration, maintenance and operation), the synoptics (regional weather) of the event and any notable unusual or unique information concerning the observation.  The committee reviews the report and discusses all aspects of the potential extreme, addressing five key questions:

Thus far, such discussions have been via email with the Rapporteur as moderator.  After their deliberations, the committee recommends a finding to the Rapporteur for final judgment and the observation is either accepted for inclusion into the Archive or dismissed.

A two-year investigation into the long-standing temperature observation of 58 °C recorded in 1922 at El Azizia, in then Italian-controlled Libya (El Fadli et al. 2013), was one of the most famous.  An international committee of 13 scientists, including scientists from Italy and Libya, concluded that the observation was invalid because of an error in recording the temperature. The announcement followed a danger-fraught investigation during the 2011 Libyan revolution.  The committee had five major concerns with the record:

The committee concluded that the most compelling scenario for the 1922 event was that a new and inexperienced observer, not trained in the use of an unsuitable replacement instrument that could be easily misread, improperly recorded the observation and was consequently in error by about 7 °C. The announcement made world news.  Following the press announcement on 13 September 2012, the WMO Extremes website traffic jumped from averaging 150 hits per day to over 24 000 hits over a three-day period.  A secondary peak occurred four months later when the New York Times wrote a follow-up story on the announcement (Shimizu et al. 2014).

A new record was accepted in 2011 for highest non-tornadic wind gust – A measurement of 408 km/h was made by an automatic recording station during Tropical Cyclone Olivia on 10 April 1996 at Barrow Island, Australia. The long-standing record had been 372 km/h, registered in April 1934 across the summit of Mount Washington, USA.  The evaluation panel included members from Australia and from Mount Washington Observatory (Courtney et al. 2012).

Two world rainfall records established in 2009 for La Réunion associated with the passage of the intense Tropical Cyclone Gamede in 2007 – First, an extreme rainfall rate of 3 929 mm over 72 hours recorded at Cratère Commerson became the world-record rainfall for that period. Second, a Cratère Commerson rain gauge registered a world-record rainfall total of 4 869 mm over a 4-day (96 hour) period (Quetelard et al. 2009).

A wave height record was accepted in 2014, specifically “Highest Significant Wave Height as measured by a Buoy” –  A significant height of 19 metres (62.3 feet) was recorded by an automated buoy at 0600 UTC on 4 February 2013 in the North Atlantic Ocean.  The recording buoy is a part of the Met Office (UK) Marine Automatic Weather Stations (MAWS) network.  This extreme wave height value was recorded following the passage of a very strong cold front that produced winds up to 43.8 knots (22.5 m/s or 50.4 mph).

In 2017, an evaluation committee completed an in depth investigation of existing mortality records for five specific weather-related events in order to determine the highest documented death tolls associated with each event – The five identified and verified historical mortality extremes are the following:

Currently, a couple of investigations are ongoing regarding very high temperatures in 2016 in Kuwait and Pakistan and extremely strong winds recorded over Japan in 2004.

A key consideration is that all extremes in the WMO Archive are accepted and listed until or unless critical evidence is presented to either refute an existing record or substantiate a new record.  In other words, the Archive is a living repository.  In a world undergoing climate change, new records are being made every day and it is the duty and responsibility of the Archive to ensure that the world’s records of weather and climate extremes are as complete, accurate, and up-to-date as possible.  Indeed, since its inception, the WMO Archive is now routinely queried by other “record-keeping” entities, such as the Guinness Book of World Records, for our expertise involving weather records.

Study and adjudication of world weather and climate records has proven to be very useful activity for both the scientific community and general public.  It has increased public awareness of the activities of WMO, and provided a valuable service to a variety of people and organizations outside of the atmospheric science community.

Within the global atmospheric science organization, the work of the WMO Archive has truly helped to advance the science.  Through analysis of new extremes made possible by new technologies, such as our lightning distance and duration extremes, and through analysis of traditional data sources and instrumentation (such as the investigation of temperature  and wind extremes), the investigations of the many scientists contributing to Archive allows us to reanalyse new, as well as past, weather records in much more detail and with greater precision than ever before.  Fundamentally, the final result is an even better set of data for analysis of important global and regional questions involving climate change.  With the continued support and incredible work of the many scientists comprising the multitude of ad hoc evaluation committees, the WMO will continue to set the standard for global monitoring and adjudication of weather and climate extremes.