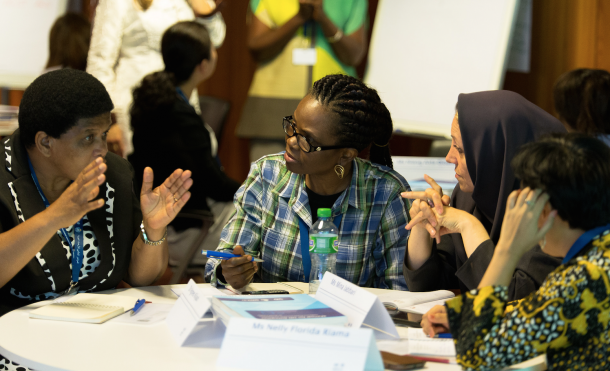 The WMO is committed to achieving gender equality, empowering women and building climate resilient societies. By realizing the full professional and human potential of both men and women through equal employment opportunities, we are able to provide improved weather and climate services that are responsive and sensitive to women’s and men’s priorities and needs.

In the last year, WMO launched several gender initiatives to ensure that gender equality and the empowerment of women remained at the heart of the global agenda.

Conference on the Gender Dimensions of Weather and Climate Services

The Conference on the Gender Dimensions of Weather and Climate Services in November 2014 aimed at making weather and climate services more gender-sensitive so that both women and men could make equally informed decisions with respect to the four priority areas of the Global Framework for Climate Services (GFCS): disaster risk reduction, public health, water resources management, and agriculture and food security. A special session on Women and Careers in Weather, Water and Climate examined ideas on how to attract and promote more female scientists, in particular, meteorologists, hydrologists and climatologists.

Under the slogan “Universal Access – Empowering Women,” the event brought together 280 female and male participants from 93 countries and 31 international organizations, ranging from United Nations agency heads to local community leaders who brainstormed on how to empower and protect both women and men working in weather and climate services. Over 70 speakers delivered talks and presentations at the high-level plenaries and participated in the working sessions in which challenges, solutions and good practice were discussed.

Several examples of issues and actions were highlighted at the Conference, illustrateing the distinct ways in which women and men are affected by weather and climate:

Disaster Risk Reduction: In many parts of the world, women and children suffer disproportionately from natural disasters, especially if they are less mobile and have less access to communication than men. For example, of the 140 000 people who died from the flood-related effects of Cyclone Gorky (1991) in Bangladesh, women outnumbered men by 14:1. During the 2014 Asian tsunami, more than 70 percent of those who died were women. Male-specific behaviors also explain certain vulnerabilities. For instance, most casualties from lightning strikes in the United States are men as they are more likely to be “risk-seekers.” Likewise, more men than women died during Hurricane Mitch (1998) because men were more likely to be involved in rescue efforts.

A better understanding of how women and men access and use hazard warnings would lead to improved impact-based forecasts which would help reduce casualties. In this respect, the collection and use of sex-disaggregated data on disaster risk reduction would inform the design of targeted interventions. More attention should also be given to women’s skills in disaster risk management and mitigation as they are often the most powerful advocates of resilience and the driving force behind recovery efforts.

Health: Women are statistically more vulnerable than men to the health consequences of extreme events, malnutrition and climate-related diseases such as malaria. According to the World Health Organization (WHO), they are also more exposed to indoor air pollution – which kills 4.3 million people per year – due to the use of indoor cooking stoves. Higher female mortality during heatwaves is observed in specific contexts, whereas men are more at risk of heatstroke because they are more likely to be active in hot weather.

The Conference encouraged meteorological services to engage more with the health community, especially female health actors. It also called for greater awareness that moving to a low-carbon economy will improve public health, especially for women and children.

Water: In developing countries, gathering and transporting water is an activity that is typically the responsibility of women and girls. It is also a task that is taking increasingly longer hours as a result of climate change, especially in drought-prone areas. In sub-Saharan Africa, women and girls bear the main responsibility (71%) for collecting water. At the same time, freshwater is becoming increasingly scarce, with one in eight people lacking access to clean water and more than three million dying each year from water-related health problems. Women are also poorly represented in water policy formulation and management.

Meteorological and hydrological services must consider the use of gender-sensitive communication methods, involving translation into local languages, use of multiple media channels, personal meetings, infographics, etc. Furthermore, women should be given greater influence over the siting of wells and the distribution of water resources, and policies and programmes should be scanned through a gender lens.

Agriculture and Food Security: In many developing countries, women are responsible for more than half the food production but rarely have equal access to resources and information. A World Food Programme (WFP) survey of 95 countries found that only 5 percent of agricultural extension services were directed towards women, who were also less likely to receive training. In a recent WMO farmers workshop in Africa on how to gather and use basic meteorological information for agriculture, only 10 percent of participants were women. Furthermore, there are approximately 300 million fewer women with mobile phones than men, meaning that weather forecasts and alerts delivered by mobile technology often do not reach those who need it most.

Weather and climate information should move from technical jargon to messages that are understandable, accessible and action oriented. More should be done to reach out to networks of women farmers. Specific plans should also be developed and implemented to fill the gaps in education, access to technology and decision-making schemes for women in rural contexts.

Careers in Weather, Water and Climate: Women account for only 30% of meteorologists and hydrologists. Efforts should be made to increase the visibility and attractiveness of careers for women in weather, climate and water. There should be more emphasis on gender awareness in the teaching profession in order to encourage more girls to study science. National and international endeavours should be integrated in promoting and supporting women in science at all levels of their careers.

WMO designated 5 June as Gender Day at the Seventeenth World Meteorological Congress. Activities kicked-off with a Working Breakfast on Gender, which discussed issues pertaining to gender equality and the empowerment of women. The Congress Plenary session then took over the discussion, which was concluded by a lunchtime panel.

The Breakfast focused on five priority areas: governance, employment and careers, education and capacity building, service provision and women’s leadership. Participants stressed the importance of female role models as a way of dispelling the perception of science as a male dominated profession. They further emphasized the need to design specific policies and trainings to bring more women into management and governance roles. The achievement of work-life balance came out as a major factor for attracting and retaining women in the profession. Many of the contributors saw a broad need to change beliefs about women’s ability to lead.

But the Breakfast did not just focus on the problems, solutions were suggested such as activities targeted to attract girls to study science at an early age, designing special measures to encourage women to take on leadership positions at work, and improving the gender balance in WMO governance bodies. Finally, collaboration between women and men was deemed important not only in terms of raising men’s awareness of gender issues, but also as a way of sensitizing them to think in a more “gender-attentive” manner and looking for shared solutions. Gender equality initiatives would not succeed without the active engagement of and collaboration with men. The actions proposed by the 50 delegates and Secretariat staff at the Breakfast will be included in the WMO Gender Equality Action Plan.

The Congress Plenary was briefed on progress in the implementation of the WMO Policy on Gender Mainstreaming and related activities. It was pointed out that whereas the number of women involved in the work of WMO governance had increased in the past two decades, growth was overly slow and had started from a very low baseline. At the current pace, WMO will only achieve gender parity in 2050 or beyond. In a push for increased female participation in the work of the Organization and to promote more gender-sensitive weather and climate services, Congress adopted a resolution on Gender Equality and the Empowerment of Women. It also updated the WMO Policy on Gender Equality and requested the Executive Council to develop a Gender Equality Action Plan. The latter is expected to invigorate the policy by setting a timeline for activities and making the various WMO governance structures accountable for progress.

On the following day, 6 June, 25 female Congress delegates became the first to benefit from a half-day Women’s Leadership Workshop co-organized with the United Nations Institute for Training and Research (UNITAR) and UN Women. The delegates participated in activities that stimulated them to critically assess what characterizes a strong leader, appreciate their personal strengths as a woman in leadership, enhance the application of key high-priority skills for effective performance, and to build personal confidence, identity and direction. They then took part in an informal discussion on Women’s Leadership in Science and Technology in which established female leaders from the diplomatic and scientific community also participated. Their candid stories of how they managed to combine leadership positions with family life and child-rearing were highly inspiring for the trainees. “This training really helped me to define what I am as a woman leader,” remarked one of the participants. “Many problems I’ve faced in the past which I could not name have been raised and discussed in this workshop. The discussion has been very thought-provoking and helpful to my future career development.”

The Workshop was the first activity organized in the framework of a new UN multi-agency Women’s Leadership Programme, which was launched on 26 May during a high-level panel discussion on “Women in Diplomacy: The Leading Role of Women in Weather and Climate Contexts” in the margins of Congress. Panelists outlined why gender solutions are critical in addressing the challenges of climate change and explored the actions required to strengthen the voice of women in diplomacy.

They stressed that women carry a disproportionate share of the burden of the development challenges resulting from climate change, however, lacked access to resources, such as information and communication technology, which can help in both mitigation and adaptation. They further noted the significant gender gap in the representation of women in delegations to multilateral conferences and emphasized the need to bring more women to the negotiating table, especially in ongoing climate talks. Panelists urged for the full engagement of women in climate adaptation efforts nationally, including in the development of national multi-hazard risk assessment plans and national adaptation plans. Education and capacity development were highlighted not only as a means of building the capacity of female leaders but also as a way of attracting more young women to science, technology, engineering and mathematics.

The Question and Answer session raised several interesting points, including: the need for data that could be disaggregated for gender and used in setting baselines; the key role of supportive environments, especially in fields with prominent gender gaps; and the need for organizations to value diversity in the workplace and to recognize that success can be better achieved when harnessing the best of women and men.