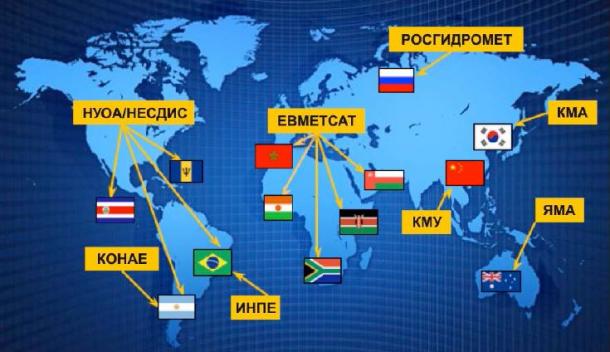 High costs and relatively low usage are major concerns for operational meteorological satellite systems. In the early 1990s, Tillman Mohr, then Director General of the European Organisation for the Exploitation of Meteorological Satellites (EUMETSAT), made a rough calculation that the operational cost of the constellation of meteorological satellites was in the order of US$ 2 million per day. However, a WMO survey conducted around the same time determined that many of its Members were not able to access and use satellite data and products in real time and were, thus, not able to reap the benefits of this major investment.

The WMO Virtual Laboratory for Meteorological Satellite Education and Training (VLab), which celebrates its 20th anniversary this year, has gone a long way in remedying this situation. VLAB is today challenged to assist WMO Members with a new generation of satellites with enhanced observation capabilities that will become operational in the 2015-2021 timeframe.

WMO was the main international provider of classroom-based training on the use of satellites data and products until the mid 1990s. However, the reach of these was limited, approximately 20 to 30 people were trained per year. Even advanced countries were experiencing difficulties in developing and maintaining the skills and expertise of staff in using traditional and new data and products such as those from geostationary satellites being launched by China, EUMETSAT, Japan and the United States of America (U.S.). In addition, training material and resources were only available in hard copy format and were expensive to produce and distribute.

In the 1990s, the WMO Executive Council (EC) Panel of Experts on Satellites, led by Mr Mohr, studied options to resolve these issues. Their final report in 1993 recommended that the Coordination Group of Meteorological Satellites (CGMS), representing the satellite operators, and WMO, representing the specialized regional training centres1, collaborate on a joint education and training initiative. Mr Donald Hinsman (then Chief of the WMO Satellite Activities Office) and to Mr James Purdom (then Chair of the WMO Commission for Basic Systems Open Programme Area Group on Integrated Observing Systems) were tasked with finding a practical solution that would engage a large number of Members.

Subsequently, in 1995, the WMO Regional Training Centre in Costa Rica hosted a course on the Utilization of Satellite Data and Products at the University of Costa Rica in San Jose, which came up with the answer. The basic concept was to use the Internet to gather expert trainers around the globe to better support Members in their use of satellite data and products. The course participants and lecturers were enthusiastic that this would lead to more, and better trained, users and justify the huge investments into satellite systems.

The concept was further refined and, in December 2000, China’s Nanjing Institute of Meteorology (now Nanjing University of Science and Technology) hosted the first VLab training event. There, Bernadette Connell from the U.S. Cooperative Institute for Research in the Atmosphere (CIRA) used VisitView to broadcast her talk from Nanjing to the rest of the world.

The first meeting of the VLab Management Group (VLMG-1) in May 2001 further developed its operating plan, strategy and timelines. The VLab co-chairs, Richard Francis (EUMETSAT) and Jeff Wilson (then with Australian Bureau of Meteorology Training Centre), were charged with driving the concept forward. Following which, the first Internet-based global weather discussion took place at the Asia Pacific Satellite Applications Training Seminar in Melbourne, Australia, in May 2002 with input from presenters in the U.S. and Europe.  Amongst others, Ray Zehr from CIRA presented four interactive lectures from Fort Collins to audiences in Melbourne and other regional training centres, confirming the viability of remote interactive, questions-and-answers training presentations.

VLMG-2, in December 2003, proposed the launch of monthly weather discussions and high profile training events (HPTEs) that continue to this day. It also developed the specifications for a VLab work station as a lack of equipment, software and training resources was hindering participants from training colleagues upon their return home. The idea was to seek funding so laptops could be provided to all participants. In 2005, WMO, through CIRA and a grant from the U.S. (NOAA) National Environmental Satellite, Data, and Information Service, was able to loan out laptops, complete with training materials, to all attendees of a training event in Costa Rica.

In addition to the standard information technology available in most countries, VLab introduced new tools such as VisitView, SABA Centra, GotoMeeting and WebEx to enable interactive training in the Centres of Excellence and in the National Meteorological and Hydrological Services (NMHS). Their capability, efficiency and cost-effectiveness enabled VLab to function and Centres of Excellence to conduct global and regional training events. The VLab maintains close links with the WMO Education and Training Office, which assists both groups in meeting the needs of their target audiences.

Two key developments from 2006 to 2009 helped ensure that VLab would deliver on its promise. A technical support officer was appointed to coordinate and assist in the organization of online events and VLMG actions, this thanks to long-term collaborative funding from CGMS satellite operators via the WMO VLab Trust Fund. A VLab home page was developed where all relevant documentation and training materials are accessible. The site serves as a platform for collaboration and networking, providing links to the individual web pages of contributing agencies. 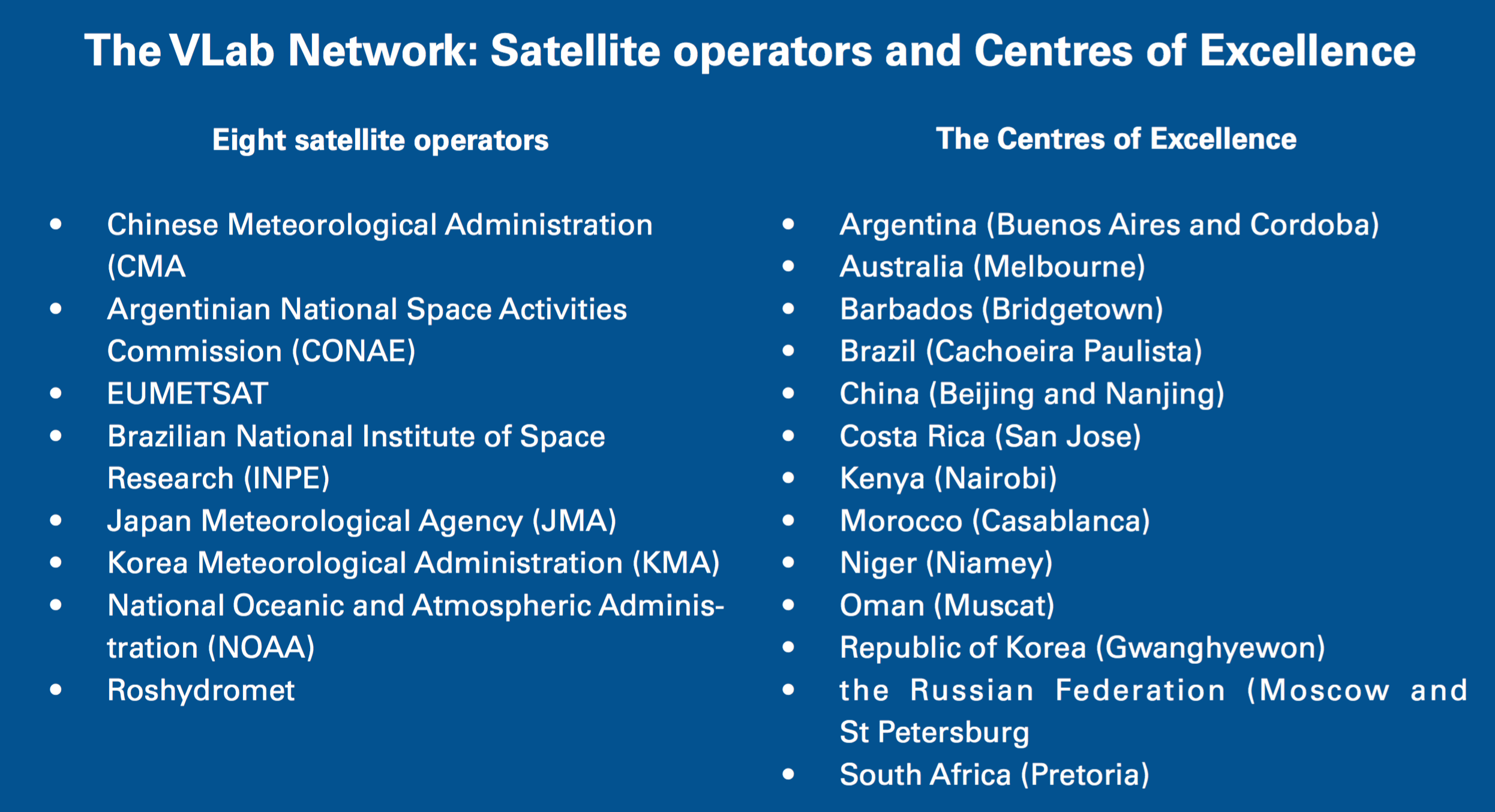 Each Centre of Excellence is responsible for conducting training activities and usually supports one or more Regional Focus Group, representing the NMHSs in the region. From 2010 to 2014, over 50 classroom and virtual training events were organized annually. All regions benefited and courses were provided in all the official languages of the United Nations plus Portuguese. These included regular online weather briefings, event weeks, regional training and virtual round tables. The increase in online training activities has, in turn, increased the number of participants all over the world.

VLab has also provided education and training in other areas of relevance to Members. For example, a five-language virtual round table on the implementation of the aeronautical meteorological competencies received 212 connections from 87 countries.

The continued collaboration of VLab with other international training and education programs in meteorology is essential for further success. The coming years will see intensified cooperation with partner organizations such as the European Virtual Organisation for Meteorological Training (EUMETCAL), the EUMETSAT-sponsored international training project (EUMETRAIN), CIRA and the U.S. COMET Training Program, the international CALMet group and the WMO Training and Education Office. The VLMG will also further build on its existing partnerships and explore new ones in order to ensure the synergetic optimization of global training efforts during times of limited resources. There is an increasing expectation that more Open Educational Resources (OER) will be created and shared within the community of meteorological trainers and that VLab will contribute to WMO Global Campus activities.

VLab continues to evolve, in order to meet its goal to improve weather, climate and water related environmental services by enabling Members to use satellite data and products. It has attained its twofold objective: better exploitation of data from the space-based global observing system and the sharing of knowledge, experiences, methods and tools related to satellite data, especially in support of Members that have limited resources. VLab has demonstrated that a network of enthusiastic people can offer effective, innovative and very cost-efficient training, through sharing and synergetic mobilization of national resources. Its success helped to inform the proposal for a WMO Global Campus. Satellite data and products contribute to weather, climate and water services and to all the priority areas identified by the Seventeenth World Meteorological Congress in May 2015. Thus, the VLab has a growing role to play, especially in view of the challenges that a new generation of satellites with will bring in the coming years. We encourage our readers to read the article that follows this one on the new Himawari-8 satellite network and the solutions implement for NMHS to access and use its data.