The World Weather Watch at 50 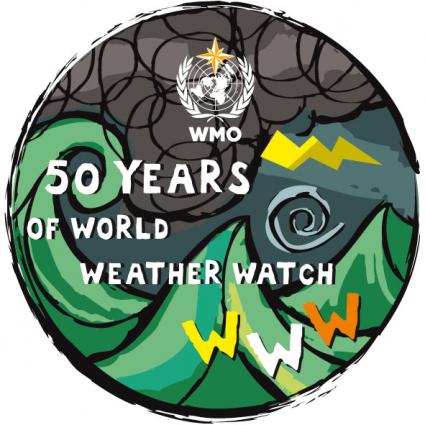 The World Weather Watch at 50

The World Weather Watch (WWW) is one of the crowning achievements of WMO. The celerity with which WMO responded to the introduction of meteorological satellites with the establishment of the WWW, and its subsequent adoption by all WMO Members, set a standard for international cooperation in operational programmes that remains unequalled today.

In its first decades, WMO observed considerable progress in many countries in expanding and improving both observational and telecommunications capabilities. Networks of land stations increased while merchant shipping and special ocean weather vessels continued to play an important role over the seas, complemented in some areas by meteorological ocean buoys. In addition, civil aviation started to provide valuable upper-air information along major flight routes. But large areas over which little meteorological information was available remained.

A major breakthrough – meteorological satellites – partially filled these gaps. On 4 October 1957, the USSR launched the first Earth-orbiting satellite SPUTNIK-1, followed later in the same year by SPUTNIK-2 and the EXPLORER-1 satellite launched by the United States on 2 January 1958. The world’s first dedicated weather satellite, the Television Infrared Observation Satellite (TIROS-1), was launched by the US on 1 April 1960. These launches effectively marked the beginning of a new era of observational data coverage for the whole globe and were key triggers for one of the most significant developments in the history of meteorology: the inception of the WMO World Weather Watch Programme.

Launch of the World Weather Watch

Early on the United Nations (UN) acknowledged the dangers as well as the benefits of more and more nations launching satellites. It recognized the fact that WMO provided a potential model for open and friendly cooperation on space matters between nations, for mutual and worldwide benefit. Accordingly, one of the first resolutions approved by the UN for “international cooperation in the peaceful uses of outer space” laid down heavy demands upon WMO. Resolution No. 1721 (XVI), adopted unanimously by the UN General Assembly on 20 December 1961 stated:

“The General Assembly, Noting with gratification the marked progress for meteorological science and technology opened up by the advances in outer space, Convinced of the world-wide benefits to be derived from international co-operation in weather research and analysis,

1. Recommends to all Member States and to the World Meteorological Organization and other appropriate specialized agencies the early and comprehensive study, in the light of developments in outer space, of measures;

(a) To advance the state of atmospheric science and technology so as to provide greater knowledge of basic physical forces affecting climate and the possibility of large-scale weather modification;

(b) To develop existing weather forecasting capabilities and to help Member States make effective use of such capabilities through regional meteorological centres;

2. Requests the World Meteorological Organization, consulting as appropriate with the United Nations Educational, Scientific and Cultural Organization and other specialized agencies and governmental and non-governmental organizations, such as the International Council of Scientific Unions, to submit a report to the Governments of its Member States and to the Economic and Social Council at its thirty-fourth session regarding appropriate organizational and financial arrangements to achieve those ends, with a view to their further consideration by the General Assembly at its seventeenth session...”

WMO promptly reacted with its “First Report on the Advancement of Atmospheric Sciences and their Application in the light of Developments in Outer Space.” The term World Weather Watch (WWW) was introduced by one of the writers, Dr Wexler (USA), and the overall objective was described by another writer, Academician Bugaev (USSR), as “to develop WWW in such a way as to ensure that any country could receive meteorological information on any scale.” The report discussed a wide range of subjects including weather forecasting and climatology and their applications, the possibility of changes in the global climate, weather modification and the meteorological aspects of water resources. However, most of the emphasis was placed on what could be considered operational service aspects: observational data and the associated telecommunication system to permit rapid collection and dissemination of data and products. Accordingly three areas in which substantial progress was considered to be essential for the WWW were identified:

(b) data processing systems and

The First Report undoubtedly ranks as one of the most significant documents in the history of WMO. It was submitted to the fourteenth session of the WMO Executive Council in 1962 and subsequently provided to the UN General Assembly and other bodies. At the 17th UN General Assembly in December 1962 the report was very favourably received and a new resolution (Resolution 1802 (XVII)) was adopted as a sequel to the previous one. The Fourth World Meteorological Congress (April 1963) considered the two UN resolutions, accepted the responsibilities placed upon WMO by those resolutions and decided to: (a) approve WWW as an extension of long-established plans for facilities and services required by the meteorological services; (b) establish a Development Fund in support of WWW; and (c) establish a WWW planning unit in the Secretariat.

Implementation and definition of components

Between the Fourth (1963) and Fifth (1967) World Meteorological Congresses, considerable progress was made in the planning of the WWW and WMO Members began to adapt their Meteorological Services to fit in with this new structure. The Fifth Congress also adopted the first WWW Plan and Implementation Programme for the period 1968-1971. This Programme outlines the general features of the structure of the WWW as a dynamic, evolutionary system with worldwide ramifications.

In 1984, two additional elements were added to the WWW Plan, namely, the Monitoring and Operational Information Service and the WWW Implementation Support. As experience accumulated with monitoring and operating the WWW, the final structure underwent slight modifications. Currently, the WWW comprises the design, implementation, operation and further development of the following three core components:

The coordination, integration and operation of these three components are achieved through two support programmes, the WWW Data Management programme and the WWW System Support Activity programme. In addition, the WWW Programme incorporates four programmes that complement and enhance the core components of the WWW and provide significant input and support to other WMO Programmes: (a) the Instruments and Methods of Observation Programme; (b) the Tropical Cyclone Programme; (c) the Emergency Response Activities; and (d) the WMO Antarctic Activities programme.

At its 50th Anniversary, the World Weather Watch must be considered a resounding success by any metric, both in terms of meeting its primary goal of enabling the weather services around the world to better serve their users and in terms of providing a model for successful international collaboration on a global scale. Over this half-century, weather prediction information and products have gone from being of interest mainly to the shipping and aviation communities and a few hobbyists to being considered vital for the protection of life and property and for routine operations and decisions affecting nearly every sector of the global economy. All of this has been made possible by the WWW and its components, and the original developers and planners of the WWW deserve credit for the vision and initiative. So does the WMO of today – the Secretariat, technical commissions, regional associations and National Meteorological and Hydrological Services (NMHSs)– which will continue to collaborate on operating and improving the WWW to ensure that it delivers the best products that scientific understanding, technological prowess and financial resources will allow at any given time, particularly for the 21st Century and beyond characterized by a changing and variable climate.

The fact that almost every sector of the economy now depends on weather forecast information is a feather in the cap of WMO, the WWW and the NMHSs, but it also brings with it enormous responsibility. It is worth remembering that no nation, however wealthy and powerful, can serve its citizens with the kind of timely and reliable weather information they have come to expect and depend on without the collaboration of all others as exemplified by the WWW.

It is important to all WMO Members that the WWW continue to evolve and grow. One may marvel at the complexity of the system and perhaps worry that it be taken for granted and that complacency should set in and threaten the enormous gains that have been made thanks to this initiative. But far from stagnation, the WMO and the WWW are entering a new era through initiatives such as the WMO Integrated Global Observing System (WIGOS), WMO Information System (WIS), the Global Framework for Climate Services (GFCS). The WWW is also an important part of the WMO contribution to the nascent Global Earth Observation System of Systems (GEOSS). One can only hope that the next 50 years will be as successful as the previous 50.