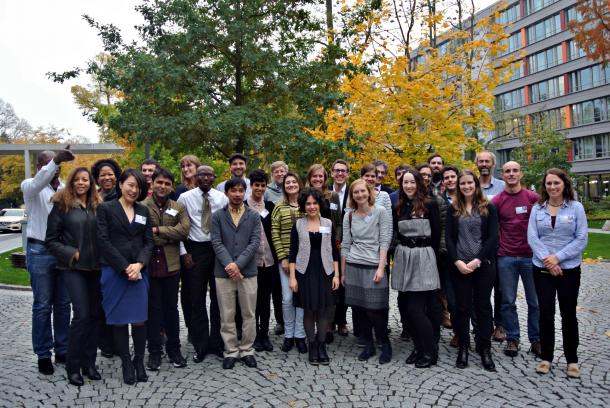 Due to human-induced climate change, the planet is undergoing many changes. “We have had years of record Arctic sea ice minimum. We have lost a massive area of northern hemisphere snow cover, probably by more than 1 million square kilometers in the past 15 years,” elaborates David Carlson, Director of the World Climate Research Programme (WCRP). “We are working in a different climate and we do not fully understand the new patterns emerging.” It is in this spirit that the WCRP and the World Weather Research Programme (WWRP) have emphasized the need to form an association where young applied scientists can work hand-in-hand with partners in the social sciences to achieve the advancements in understanding Earth system science desperately needed by society.

With support from the three leading WMO research programmes – the Global Atmospheric Watch (GAW), WCRP and WWRP – theYoung Earth System Scientists (YESS) Community has expanded to ll this role. In October 2015, the newly formed International Steering Group of theYESS Community met for the first time at the Deutscher Wetterdienst in Offenbach, Germany, to de ne the governance, roles and terms of reference of the association.1

TheYESS Community was launched in Germany by a handful of students in 2010 to provide a collaborative platform for early career researchers working in the field of Earth system science. In 2014, the Community’s founders approached WCRP to obtain support for establishing a unified early career network that would reach out to all young professionals in climate-related natural sciences with additional focus on the socio- economic and applied sciences fields. Following this, YESS played a crucial role in the early career scientists’ activities at the 2014 Climate Symposium in Darmstadt, organized by WCRP and EUMETSAT and at the World Weather Open Science Conference (see Bulletin...) organized by WWRP and Environment Canada.

Following these two events, given the increasing overlap in weather and climate sciences, the YESS Community came together to form a network of international and interdisciplinary early career Earth system scientists. And by the end of 2015, many early career scientists in the fields of climate, weather, water and related applications had joined the Community, which now counts some 600 members.

The Community principal aims are to unify early career professionals in an influential network to enhance collaborations and promote both local and global exchange across multiple disciplines related to Earth system sciences. YESS gives young scientists a collective voice and leverage, while supporting their career development – its members have a critical role to play in shaping the future of Earth system science. The Community wants to breach the gaps between traditional disciplines by incorporating a powerful network of both natural and social scientists to work towards a seamless understanding and prediction of the Earth system and its impacts on society.

Under the guidance of the GAW, WCRP and WWRP, YESS is currently in the process of launching itself as a truly global early career network in the Earth system sciences.

“We are working in a different climate and we do not fully understand the new patterns emerging.”
- David Carlson

A group of 27 young male and female scientists from 18 countries and multiple backgrounds participated the first YESS workshop on the Earth System Science Frontiers held in Offenbach, Germany, in October 2015. This event was organized in liaison with and sponsored by the WMO research programmes: GAW, WWRP and WCRP. The group had held monthly teleconferences to develop the scope and vision of the network and to develop concrete plans. Representatives of the research programmes addressed the workshop and followed its progress.

The workshop discussed the interdisciplinary challenges in Earth system science in a comprehensive way. Three areas were highlighted:

Participants identified the structural needs of an early career scientist network aimed at tackling these science challenges. They developed implementation strategies for formally establishing the network and enhancing its reach and potential impact.

The discussion at this workshop resulted in a white paper on Earth System Science Frontiers, presenting the vision and the role of young scientist in shaping science during the coming decade. Focus was paid to identifying challenges and future directions for the following aspects:

The paper presents some of the key questions in these areas on which future societies will expect scientific development. It consolidates the position of young scientist toward continuity and sustaining capability – that is, the long-term development of the joint sustained research infrastructure that is required by the global research community to answer the questions that future societies will be asking.

The collaboration of natural scientists, social scientists and communication experts, as it is aimed for in the interdisciplinary approach of YESS, will play a significant role in the dissemination of knowledge on the Earth system. It will allow for a more comprehensive view of social context in aggravation damages in weather-, climate-and water-related disasters. It will permit the development of knowledge and innovative ideas to further minimize or adapt to problems associated with extreme events and climate change.

YESS representative Fiona Tummon of ETZ Zurich, one of the world’s leading universities for technology and natural science, will address guests at the WMO World Meteorological Day celebration on 23 March.

To ensure the sustainability and continuous growth, a more formal implementation of theYESS Community with dedicated financial resources will be required. WCRP, WWRP and GAW are in process of consolidating resources for a centralYESS office, which will be responsible for further developing and promoting its vision. A truly international, sustainable research early career scientist network will compliment and integrate ongoing activities in the short-term and benefit the WMO research programmes in the long-term by training and creating opportunities for future leaders.

In the midst of almost daily reports on disenfranchised youths, the Young Earth System Scientists Workshop at the end of October was a breath of fresh air. These young scientists are eager to work together to improve the environment of the Earth system.