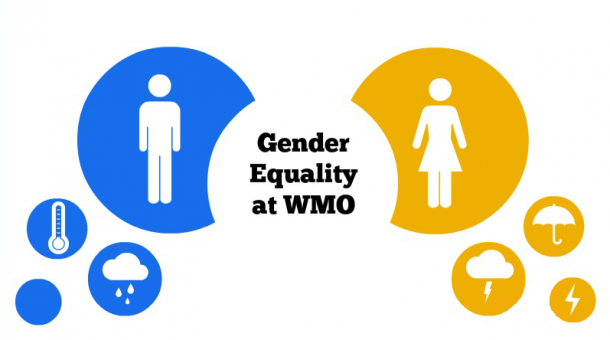 WMO is resolved in its efforts to achieve gender equality, empower women and build climate resilient societies. To this end, it is committed to mainstreaming gender in its governance, working structures, programmes and service delivery. It is also determined to attract more women in the fields of science and meteorology. 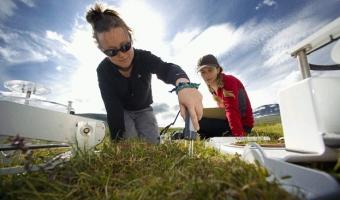 At international, national and local levels, there is a drive to improve access for women to technology, information, science education and technical training and to strengthen the position of women scientists and technologists. Ensuring that women have equal access to science education and technology is an essential catalyst to ensure that the developers and users of weather, water and climate services provided by WMO and its Members serve the global community – men, women, boys, girls. 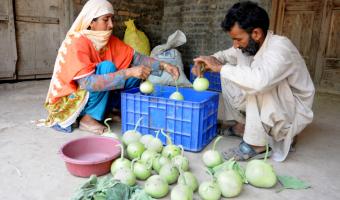 Women and men are affected differently by weather and climate. Gender sensitivities are particularly pronounced in the areas of disaster risk reduction, public health, water resources management, and agriculture and food security. 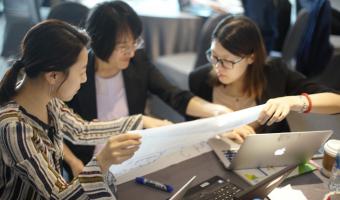 A good practice is a specific action or a set of actions in advancing gender equality and the empowerement of women which has demonstrable results with quantatative and/or qualitative evidence of impact as well as potential to be successfully adapted and replicated elsewhere. 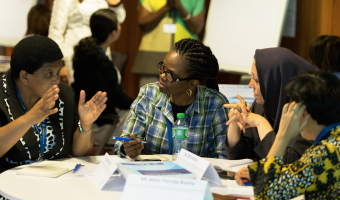 For the latest news, videos, photos and upcoming events on gender equality. 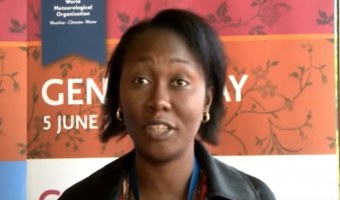 Selected Resources on Gender, Climate, Water and the Environment

Gender and the Environment

This course aims to develop and/or strengthen awareness and understanding of gender equality and women’s empowerment as a first step towards behavioural change and the integration of a gender perspective into everyday work for all UN staff at headquarters, regional and country levels. It provides an introduction to the concepts, international framework, and methods for working toward gender equality and women’s empowerment. It also offers users the opportunity to make links between gender and specific thematic areas such as work; education; political participation; emergencies; peace and security; sexual and reproductive health; sexual and gender diversity and human rights; and violence against women.

The course will help you better understand the linkages between gender and the environment. It will provide you with the knowledge and tools to mainstream gender, and to be an effective change-maker for sustainable development. It will also give you facts and figures, and a better understanding of the global international frameworks related to gender and environment. It is a “one-stop-shop” for information and illustrations on gender dimensions linked to biodiversity, climate change, land degradation, international waters, and chemicals and waste.

This online course has been developed by the United Nations Development Programme (UNDP), the United Nations Population Fund (UNFPA), the United Nations Children's Fund (UNICEF) and UN Women to build organizational capacity towards attaining results in promoting gender equality. It consists of 8 modules on a range of subjects and aims to contribute to a common understanding of terminology, core principles and effective approaches that help organizations work together on gender programming. The course is interactive and designed to be completed in about 3 hours. A printable course transcript is available.​

UN Entity for Gender Equality and the Empowerment of Women

Other International and Regional Organizations

Empowerment: Refers to increasing the spiritual, political, social or economic strength of individuals and communities. Empowerment of women and girls concerns women and girls gaining power and control over their own lives. It involves awareness-raising, building self-confidence, expansion of choices, increased access to and control over resources and actions to transform the structures and institutions which reinforce and perpetuate gender discrimination and inequality. The core of empowerment lies in the ability of a person to control his/her own destiny. This implies that to be empowered women must not only have equal capabilities (such as education and health) and equal access to resources and opportunities (such as land and employment), but they must also have the agency to use these rights, capabilities, resources and opportunities to make strategic choices and decisions (such as is provided through leadership opportunities and participation in political institutions). Source: Gender Equality, UN Coherence and You (UNDP, UNFPA, UNICEF, UN Women)

Gender and Sex: Sex refers to the biological differences between male and female bodies. Gender refers to the sociologically and culturally based distinction between men and women. One‘s gender is therefore most often comprised of those roles and attributes that are not purely “natural” or biologically determined, but are rather dictated by norms and traditions. Because gender is not biologically given, the attributes of both male and female gender can (and do) change over time and across cultures. It is also important to emphasize that the concept of gender is not interchangeable with women. Gender refers to both women and men, and the relations between them. Promotion of gender equality should concern and engage men as well as women. Sources: Gender Mainstreaming in Practice: A Toolkit andhttp://www.un.org/womenwatch/osagi/pdf/factsheet2.pdf

Gender Analysis: Gender analysis is a critical examination of how differences in gender roles, activities, needs, opportunities and rights/entitlements affect men, women, girls and boys in certain situation or contexts. Gender analysis examines the relationships between females and males and their access to and control of resources and the constraints they face relative to each other. A gender analysis should be integrated into all sector assessments or situational analyses to ensure that gender-based injustices and inequalities are not exacerbated, and that where possible, greater equality and justice in gender relations are promoted. Source: Gender Equality, UN Coherence and You (UNDP, UNFPA, UNICEF, UN Women

Gender Balance: The ratio of women to men in any given situation. Gender balance is achieved when there are approximately equal numbers of men and women present or participating. This is sometimes also referred to as gender parity (see below). Source: UNDP, Gender Mainstreaming in Practice: A Toolkit

Gender Blindness: is the failure to recognize that the roles and responsibilities of men/boys and women/girls are given to them in specific social, cultural, economic and political contexts and backgrounds. Projects, programmes, policies and attitudes which are gender blind do not take into account these different roles and diverse needs, maintain status quo, and will not help transform the unequal structure of gender relations. Source: Gender Equality, UN Coherence and You (UNDP, UNFPA, UNICEF, UN Women

Gender Equality: Refers to the equal rights, responsibilities and opportunities of women and men and girls and boys. Equality does not mean that women and men will become the same but that women’s and men’s rights, responsibilities and opportunities will not depend on whether they are born male or female. Gender equality implies that the interests, needs and priorities of both women and men are taken into consideration, recognizing the diversity of different groups of women and men. Gender equality is not a women’s issue but should concern and fully engage men as well as women. Equality between women and men is seen both as a human rights issue and as a precondition for, and indicator of, sustainable people-centred development. Source: http://www.un.org/womenwatch/osagi/conceptsandefinitions.htm

Gender Equity: is the process of being fair to men and women, boys and girls and is about equality of outcomes and results. Gender equity may involve the use of temporary special measures to compensate for historical or systemic bias or discrimination. It refers to differential treatment that is fair and positively addresses a bias or disadvantage that is due to gender roles or norms or differences between the sexes. It is a means to ensure that women and men, girls and boys have an equal chance not only at the starting point but also when reaching the finishing line. It is about the fair and just treatment of both sexes that takes into account the different needs of the men and women, cultural barriers and (past) discrimination of the specific group. Source: Gender Equality, UN Coherence and You (UNDP, UNFPA, UNICEF, UN Women

Gender Mainstreaming: Mainstreaming a gender perspective is the process of assessing the implications for women and men of any planned action, including legislation, policies or programmes, in all areas and at all levels. It is a strategy for making women’s as well as men’s concerns and experiences an integral dimension of the design, implementation, monitoring and evaluation of policies and programmes in all political, economic and societal spheres so that women and men benefit equally and inequality is not perpetuated. The ultimate goal is to achieve gender equality. Source: ECOSOC agreed conclusions 1997/2

Gender Neutral: Gender-neutral policies are not specifically aimed at either men or women and are assumed to affect both sexes equally. However, they may actually be gender-blind (see above). Source: UNDP, Gender Mainstreaming in Practice: A Toolkit

Gender Norms: Gender norms are the accepted attributes and characteristics of male and female gendered identity at a particular point in time for a specific society or community. They are the standards and expectations to which gender identity generally conforms, within a range that defines a particular society, culture and community at that point in time. Gender norms are ideas about how men and women should be and act. Internalized early in life, gender norms can establish a life cycle of gender socialization and stereotyping. Source: Gender Equality, UN Coherence and You (UNDP, UNFPA, UNICEF, UN Women

Gender Parity: is a numerical concept. Gender parity concerns relative equality in terms of numbers and proportions of men and women, girls and boys. Gender parity addresses the ratio of female-to-male values (or males-to-females, in certain cases) of a given indicator. Source: Gender Equality, UN Coherence and You (UNDP, UNFPA, UNICEF, UN Women

Gender Perspective: Using a ‘gender perspective’ entails approaching or examining an issue, paying particular attention to the potentially different ways in which men and women are or might be affected. This is also called using or looking through a ‘gender lens.’ Source: UNDP, Gender Mainstreaming in Practice: A Toolkit

Gender Relations: The social relationships and power distribution between men and women in both the private (personal) and public spheres. Source: UNDP, Gender Mainstreaming in Practice: A Toolkit

Gender Roles: are social and behavioural norms that, within a specific culture, are widely considered to be socially appropriate for individuals of a specific sex. These often determine the traditional responsibilities and tasks assigned to men, women, boys and girls. Gender-specific roles are often conditioned by household structure, access to resources, specific impacts of the global economy, occurrence of conflict or disaster, and other locally relevant factors such as ecological conditions. Source: Gender Equality, UN Coherence and You (UNDP, UNFPA, UNICEF, UN Women

Glass Ceiling: refers to impediments that prevent women from rising to top positions in an organization, whether public or private. Thus, this includes the political, public, judicial, social, and economic domains. The term “glass” is used as these impediments are apparently invisible and are usually linked to the maintenance of the status quo in organizations as opposed to transparent and equal career advancement opportunities for women and men within organizations. Source:Gender Mainstreaming in Practice: A Toolkit

Human Rights-Based Approach (HRBA): A human rights-based approach entails consciously and systematically paying attention to human rights in all aspects of programme development. A HRBA is a conceptual framework for the process of human development that is normatively based on international human rights standards and operationally directed to promoting and protecting human rights. The objective of the HRBA is to empower people (rights-holders) to realize their rights and strengthen the State (duty-bearers) to comply with their human rights obligations and duties. States’ obligations to human rights require them to respect, protect and fulfil women’s and girls’ rights, along with the rights of men and boys. Source: Gender Equality, UN Coherence and You (UNDP, UNFPA, UNICEF, UN Women

Sex: see ‘Gender and Sex’ above

Sex-Disaggregated Data: Data that is cross-classified by sex, presenting information separately for men and women, boys and girls. When data is not disaggregated by sex, it is more difficult to identify real and potential inequalities. Sex-disaggregated data is necessary for effective gender analysis. Source: Gender Equality, UN Coherence and You (UNDP, UNFPA, UNICEF, UN Women