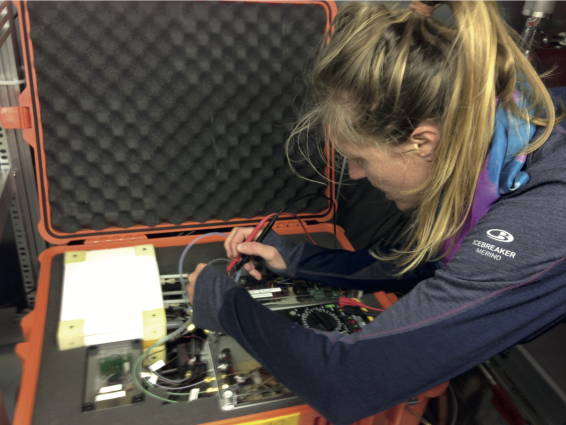 Fiona Tummon, an atmospheric scientist, grew up in Cape Town, South Africa, a coastal city. Inspired by one of her mother’s friends, she decided to pursue an undergraduate degree in oceanography at the University of Cape Town. Studying a mix of biology, chemistry and physics, Fiona learned more about the big blue surrounding her hometown and gained a better understanding of how important the ocean was for Earth’s climate. This led to her completing a Masters degree in Atmospheric Science, followed by a PhD, jointly from the University of Cape Town and the Université Paul Sabatier - Toulouse III (France), focusing on the climatic impact of aerosols over southern Africa.

“I grew up in Cape Town, South Africa, a city surrounded by the ocean. An encounter with one of my mother’s friends inspired me to pursue an undergraduate degree in oceanography. Studying a mix of biology, chemistry, and physics gave me the chance to learn more about the big blue surrounding my home town.”

In 2012, Fiona started her post-academic career as a Project Scientist for a World Climate Research Programme (WCRP) Core Project named Stratosphere-troposphere Processes and their Role in Climate (SPARC). Currently serving as the Director of SPARC’s International Project Office, Fiona focuses on both research and science coordination, however, she would like to concentrate more on the latter. As projects become more multidisciplinary and international, proper coordination is vital in ensuring effective facilitation of quality science. The SPARC framework offers guidance, assistance, opportunities and visibility. This allows scientists to come together to discuss and present their research to each other, to create partnerships and to define new key scientific topics.

In the future, Fiona sees weather and climate science growing further together to provide truly seamless predictions. She recognizes that challenges still remain in terms of our understanding and ability to predict various temporal and spatial scales, particularly at the cross-over from traditional weather to climate scales. However, she is confident that the new generation of young scientists are ready to face these challenges and continue pioneering these crucial areas of research in order to provide solutions that will benefit society and the long-term advancement of Earth system sciences.