WMO Statement on the status of the global climate in 2015 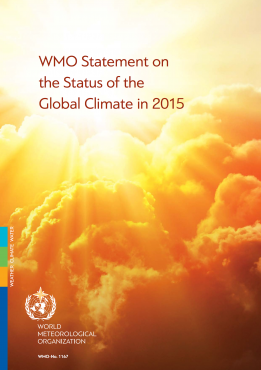 WMO Statement on the status of the global climate in 2015

The year 2015 will stand out in the historical record of the global climate in many ways. Modern records for heat were broken: 2015 was a record warm year both globally and in many individual countries. Heatwaves were extremely intense in various part of the world, leading to thousands of deaths in India and Pakistan. Record extreme precipitation led to flooding that affected tens of thousands of people across South America, West Africa and Europe. Dry conditions in southern Africa and Brazil exacerbated multi-year droughts. The influence of the strong El Niño that developed in the later part of 2015 can be discerned in many of the year’s weather and climate events. While much work remains to be done, advances in international collaboration, the near-real-time sharing of data, and progress in attribution science are starting to make it possible to disentangle the respective roles played by El Niño, other natural climate variations and human-induced climate change.