2015 Ozone Hole One of the Largest on Record 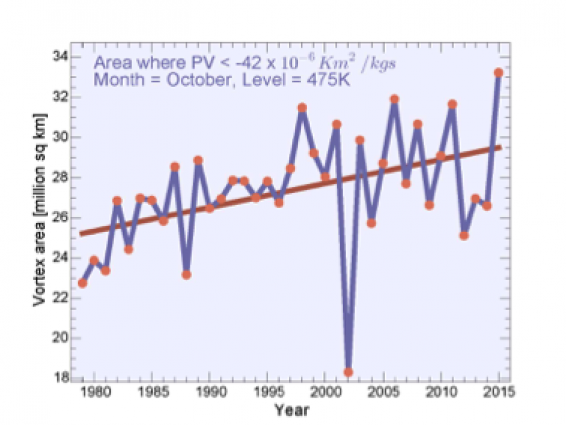 2015 Ozone Hole One of the Largest on Record

The Montreal Protocol on Substances that Deplete the Ozone Layer is effective: the production and consumption of chlorofluorocarbons and halons has stopped. The atmospheric concentration of chlorine-and bromine-containing compounds is slowly decreasing after reaching a maximum around year 2000. Nonetheless, the atmosphere still contains more than enough of these compounds to cause complete destruction of ozone over a certain altitude, if temperatures drops below −78°C for an extended period of time in the austral spring.

In 2015, the south polar stratospheric vortex has been unusually large, strong and persistent with polar cap temperatures below the 1979–2014 average during most of July, August and September and with record low temperatures in October. The low temperatures, together with the size of the vortex, have led to the formation of an ozone hole that can be compared to the large ozone holes observed in 1998, 2000, 2003 and 2006.

Data on the ozone hole area from the NASA Goddard Space Flight Center show that if averaged over the 60 worst consecutive days, 2015 has experienced the largest ozone hole ever seen. On the other hand, if one considers the amount of ozone destroyed, the so-called ozone mass deficit, the 2015 ozone hole is the fifth largest on record after 1998, 2000, 2001 and 2006. 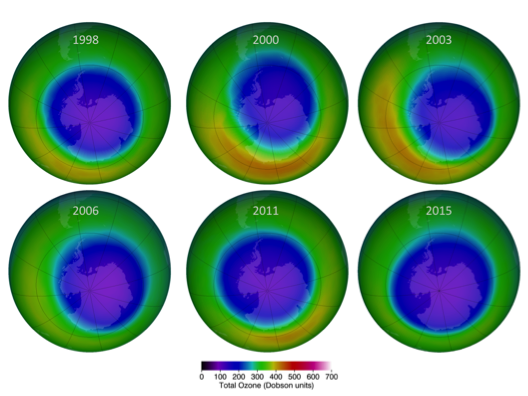 The 2015 ozone hole is larger and more concentric around the South Pole than in other years as shown in this graphic of average total ozone column over the month of October for years with large ozone holes.

As long as the amounts of chlorine and bromine in the atmosphere remain high, one can expect large ozone holes to occur if the stratospheric temperatures remain cold into the spring. According to the WMO/UNEP Scientific Assessment of Ozone Depletion, a statistically significant decline is not expected in the size of the Antarctic ozone hole before 2025. In the meantime, large ozone holes are possible. In the long run, as chlorine and bromine decline, the annually recurring ozone holes will become increasingly smaller, eventually disappearing around 2070. 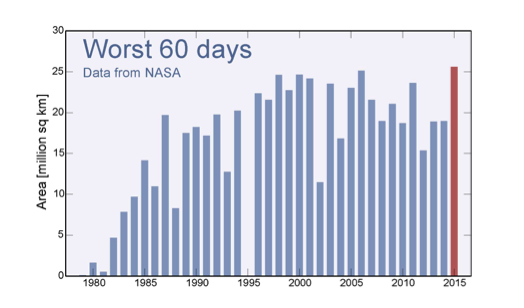 Area of ozone hole, averaged over the worst 60 consecutive days using data from NASA and based on observations from the series of TOMS instruments and the OMI instrument. The averaging and plotting was carried out by WMO.