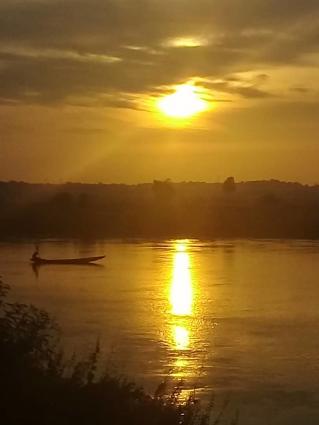 Cameroon’s Ministry of Transport, through its Department of National Meteorology (DNM), has partnered with WMO and the Global Water Partnership, Central Africa (GWP-CAf) GWP Central Africa - GWP over the last two years to undertake action to adapt farmers in the rural Far North Regions to climate change as part of the country’s National Climate Change Adaptation Plan (NAPCC). As a result of this experience, the recommendation is to base agriculture and climate training on a Gender Transformative Approach to better involve women for the Far North Region of Cameroon.

The challenges were many. Cameroon’s Sudano-Sahelian agro-ecological zone (in the Far North Region) is the country’s most vulnerable area to climate hazards – heat waves, floods and droughts – and its agriculture was being the most affected. The Far North was experiencing increases in rainfall intensity with corresponding land erosion, decreases in soil fertility and crop flooding. Rainfed crop yields had already reduced by half and net income from crops is expected to fall by 90% by 2100. In addition, the Far North is experiencing prolonged conflicts with terrorist groups, has minimal infrastructure – telecommunications, roads, schools, etc. – and a mostly impoverished population. These factors further aggravate the precarious living conditions of the population whose main subsistence activity is agriculture. Women are the main producers but most are not sufficiently equipped to adapt their crops and agricultural calendars or climate variations.

First, the DNM, with the support of GWP-Cameroon and guidance from WMO, organized a multi-stakeholder dialogue in November 2020 with providers (Ministry of Agriculture and Rural Development (MINADER), Hévéa Cameroun SA, etc), disseminators (DMN, community radio, etc) and users (farmers) of agrometeorological information to improve the mechanisms for collecting and disseminating agrometeorological information. The consultation was initiated because users at the lowest level had difficulties understanding the technical language in the agrometeorological information they were provided. The meeting also aimed to establish links between all stakeholders so that each could talk about their constraints, difficulties and needs. The representatives of women's agricultural associations also used the opportunity to talk about their training needs, noting that the patriarchal system in which most of them live does not always permit them to express themselves, to access higher levels of education or to engage in other activities to strengthen their knowledge. The dialogue identified a key point for action: the conversion of the agro-meteorological bulletin information into usable advice to be disseminated in local languages on community radio stations for both male and female farmers.

As a follow-up, with the support of WMO and GWP-CAf as part of the Water, Climate, Development – Gender (WACDEP-G) Program, a roving seminar on weather, climate and agriculture was organized in Meri, a district in the Far North Region in August 2021. Using both a participatory and decentralized approach, the seminar involved several stakeholders: regional delegation of the Ministry of Transport, Meri Town Hall, Community Initiative Group and associations of female and male farmers, Douvangar Catholic church, Jericho Agricultural Training Center, local non-governmental organizations and community radio stations. The objective of this seminar was to help farmers to better understand the climatic variations they have been observing in recent years and the effects on their crops. They were also trained on the use rain gauges to collect in situ data, so they could become active participants in the chain of collection and dissemination of climate information. Nearly 40 farmers were trained, including 5 women. Ten focal points were designated to take charge of the 10 rain gauge stations installed in Meri’s 10 districts and each was provided with a telephone to facilitate the transfer of information. In the district of Douvangar, a female leader was designated as a focal point (see attached picture). The focal points were enthusiastic: the day after the installation of the rain gauges, they started transmitted data to the Ministry of Transport and regularity in the transmission of data has been observed since.

There were many challenges to overcome. It was difficult to access districts and villages to install the rain gauges due to the poor state of the roads in the rainy season. Telephone network coverage is very limited, affecting the transmission of rainfall data and making communication and follow-up with the focal points difficult. The low participation of women, mainly because the patriarchal system, which also does not permit them to be involved in decision-making processes even in sectors where they are the main actors like agriculture. Five women participated in the seminar thanks to their influence as leaders in the communities, their relationship with the churches and religious authorities, and the traditional and political authorities (Mayor). Subsequent seminars may try another approach suggested by the Coordinator of the Jericho Training Center who often successfully mobilizes female participants in related trainings: training couples.

Following this experience, the recommendation for the Far North of Cameroon is to base agriculture and climate training on a Gender Transformative Approach to better involve women. Women are the main producers and need to reduce their vulnerability to climate change by adapting their crops and agricultural calendars to obtain better yields. This will improve their standard of living and increase food security.