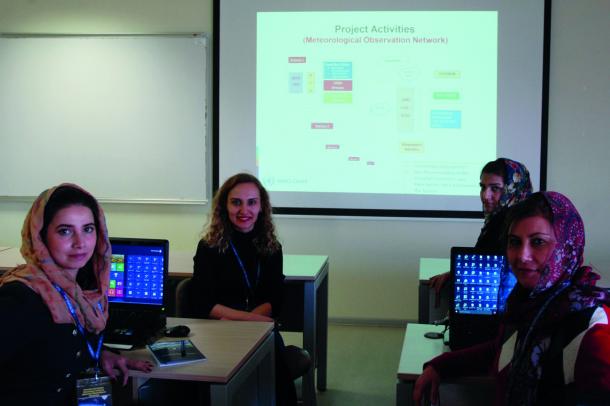 The Afghanistan Meteorological Department (AMD) has reconnected with the world in a move that will help to improve the country’s hydrometeorological hazard early warning systems. On 15 February, AMD uploaded surface synoptic observation data to the WMO Global Telecommunications System (GTS), making Afghanistan’s data visible and accessible to the international community for the first time in 30 years. From then on, AMD will upload in-situ meteorological data to the GTS on a regular basis. “One of the benefits of this will be better predictions of hazards such as severe weather and flash flooding for Afghanistan and the South Asian region,” said Paul Pilon, Chief of WMO Hydrological Forecasting and Water Resources Division.

This milestone is the result of a concerted e ort between WMO and the U.S. Agency for International Development/Office of U.S. Foreign Disaster Assistance (USAID/OFDA). Afghanistan is extremely exposed to hydrometeorological hazards, which claimed nearly 15 000 lives from 1980 to 2015. Of these, 4 615 were due to flash floods and floods, according to the International Disaster Database, Centre for research on the Epidemiology of Disasters (CRED), which have cost the country an estimated US$ 396 million in economic losses.

Afghanistan’s development has also been hampered through years of insecurity. To reduce the socio-economic impact of hydrometeorological hazards, in 2013, USAID/OFDA pledged financial support for the project “Strengthening Early Warning Systems in Afghanistan” to be implemented by WMO. Since then, WMO has been working closely with AMD, building its institutional capacity to produce severe weather forecasts and early warnings.

This involved, amongst others, building the infrastructure for AMD to be able to access and exchange data and products through the GTS. Local and wide area networks, back-up power sources and security systems were installed; IT equipment with ample computing power was procured; the building was renovated; and a forecasting room was constructed.

The weather forecasting and satellite meteorology training currently taking place (6 March to 14 April) includes three female weather forecasters. They are passionate about making a difference and excited about the possibilities opened up by this project. “Afghanistan has changed. Women can show what we can do for our country. I’m happy that we have this chance,” said Farzana Hashimi. Soma Popalzai added, “This gives us the chance to prove that women can also work hard.”

The project has a strong focus on strengthening infrastructure and capacity building is meant to ensure long-term sustainability. But developing AMD to provide full meteorological and aviation services is a long process and it is critical for the international community to remain invested in this project. “This is just the first phase,” said Ms. Laila Amin. “We want to have an active meteorology centre in Afghanistan. We don’t want to fall behind.”