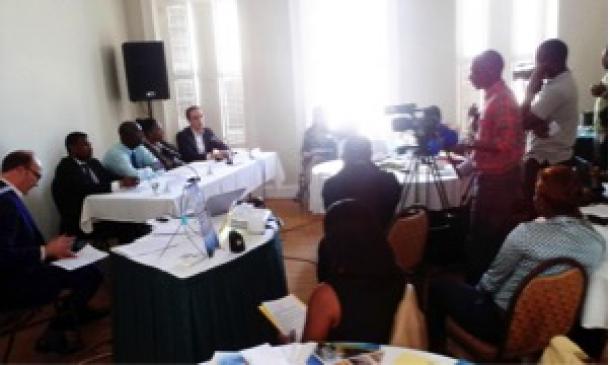 The Caribbean Institute for Meteorology and Hydrology (CIMH) has noticed an increase in regional reporting on its climate products and services since launching media workshops at its Barbados head- quarters in 2015. To date, the total number of articles is 172, which is considerably higher than in pre-programme years.  CIMH has hosted three media training events, typically in conjunction with the Caribbean Climate Outlook Forums held at the beginning of the wet/hurricane and dry seasons. National-level media are invited to the workshops aimed at improving their capacity to report on climate issues and climate services. CIMH hoped that by doing so, the media would help the region’s six climate-sensitive sectors – agriculture, disaster management, energy, health, tourism and water – to become aware of the benefits of climate services in decision-making processes.  The most recent workshop was in Bridgetown, Barbados, on 17 February 2016. The full-day training gave Caribbean reporters practical tips on how to research, prepare and cover weather and climate stories that convey critical information for the region’s climate-sensitive sectors. British Broadcasting Corporation (BBC) journalist, Mr. David Eades, facilitated the discussions. The session was part of a larger international e ort supported by WMO and regional partners, and funded by Environment Climate Change Canada. CIMH is a regional partner for the Programme for Implementing the GFCS at Regional and National scales.

“I now include Seasonal Outlooks in my broadcast: TV and radio weather through to online Twitter and Facebook. I do interesting news stories – TV pieces on issues such as Heat Warnings, Water Use on Golf Courses ahead of a dry or wet season, and a radio climate show that highlights the season's potential impact,” says Ean Wallace, Weather Anchor at Trinidad-based Caribbean New Media Group. "Viewers told me they saw and understood why some messages stood out and others faded easily from memory.”

“As a result of building their capacity, we can raise awareness among climate-sensitive sectors, and the public at large about how climate products and services can inform their decision-making and reduce their vulnerability to climate events such as drought, excessive heat and rainfall that can cause flooding,” explains Mr. Adrian Trotman, Chief of Applied Meteorology and Climatology at CIMH.

In the coming months, CIMH plans to hold climate awareness building exercises focused on how media can continue to report on related issues and how they affect the Caribbean’s climate-sensitive sectors. For more information visit: http://rcc.cimh.edu.bb/eccc/